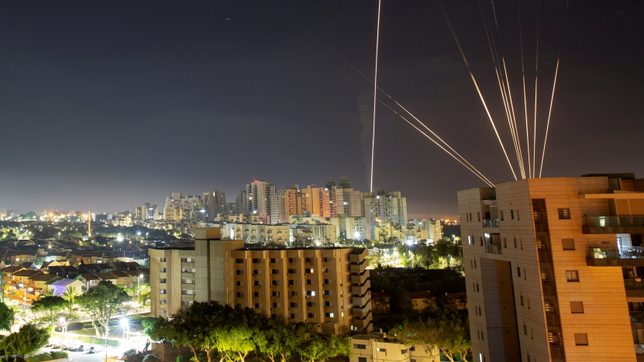 ISRAEL-GAZA CONFLICT. Streaks of lights are seen from Ashkelon as rockets are launched from the Gaza Strip towards Israel, May 15, 2021

Facebook Inc set up a 24-7 “special operations center” last week to respond to content posted on its platform about the Israeli-Palestinian conflict amid violence in the region, the company said on Wednesday, May 19.

Misinformation, hate speech and calls for violence about the conflict have circulated on social media platforms amid the deadly fighting.

“This operations center allows us to closely monitor the situation so we can remove content that violates our community standards faster, while also addressing possible errors in enforcement,” Monika Bickert, Facebook’s vice president of content policy, told reporters on a conference call.

The New York Times reported on Wednesday that Jewish extremists had formed new groups on WhatsApp, the Facebook-owned encrypted messaging service, for the purpose of committing violence against Palestinians.

“As a private messaging service, we do not have access to the contents of people’s personal chats though when information is reported to us, we take action to ban accounts we believe may be involved in causing imminent harm,” a WhatsApp spokesman said. “We also quickly respond to valid legal requests from law enforcement for the limited information available to us.”

The Thomson Reuters Foundation also reported that Instagram and Twitter Inc had blamed glitches for the deletion of posts mentioning the possible eviction of Palestinians from East Jerusalem.

Facebook has banned Gaza’s Islamist rulers Hamas from its platform and removes content praising the group regarded by Israel, the United States and the European Union as a terrorist group.

Facebook’s Bickert said the new operations center was staffed by experts, including native Arabic and Hebrew speakers. California-based Facebook has been criticized in the past for lacking local language expertise and resources amid violent situations in other countries. – Rappler.com