Meet the Genius EV, a Filipino engineer’s contribution to the green movement 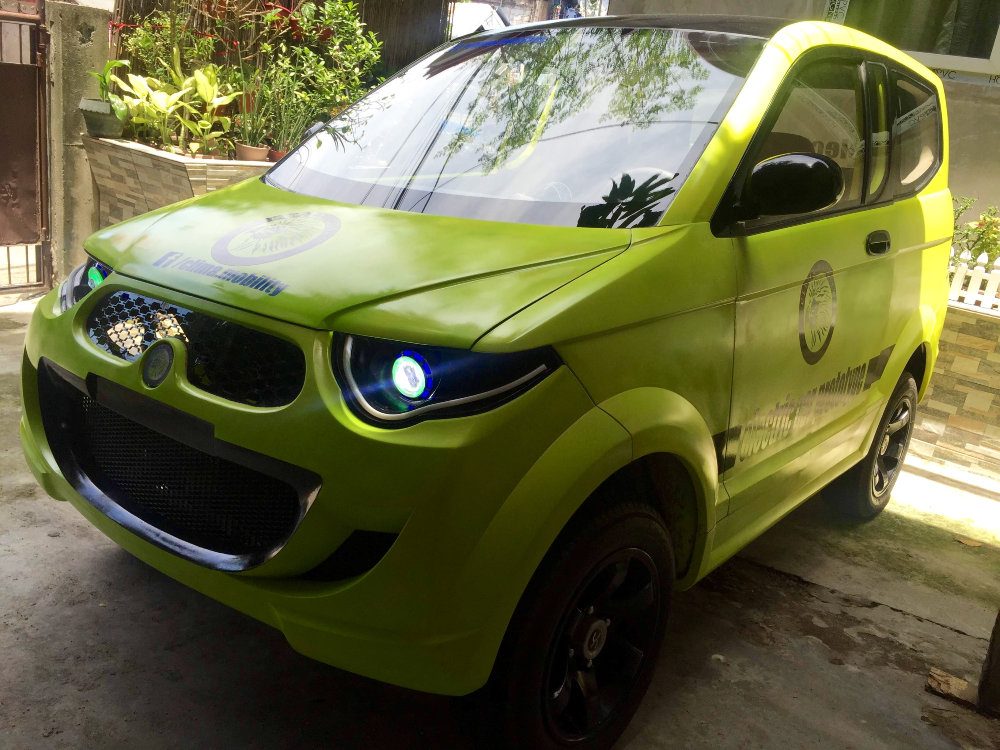 Facebook Twitter Copy URL
Copied
"I wanted to build something that could help address the problem," says the electric vehicle's creator Adonis Lagangan

MANILA, Philippines – According to the Department of Energy (DOE), the Philippine transport sector accounts for about a third of the total greenhouse gas emissions of the country, surpassing the global record of 14% as of 2010. The dwindling prices of cars and worsening state of public transport in urban areas do not help. If practices contributing to the problem are not abated, things could definitely get worse.

Adonis Lagangan, a 1994 mechanical engineering graduate of the Mapua Institute of Technology, seeks to be a part of the solution – by making electric cars.

“We know that climate change is irreversible and part of the problem is the greenhouse gas emissions from vehicles, so I wanted to build something that could help address the problem,” Lagangan told Rappler.

Lagangan developed an electric car prototype which he calls Genius Electric Vehicle (EV), a 5-seater microcar that can run from 50 to 70 kilometers (km) at speeds of around 65 km/h, and topping out at 75 km/h. It takes 4 to 5 hours to charge the car.

It’s a start. Cars by established brands such as the Nissan Leaf, for example, can travel up to about 130 km (80 miles) on a single charge. Probably the most sought after electric car, the Tesla Model S, can travel almost four times farther at 483 km (300 miles) on a single charge. Both Nissan Leaf and Tesla Model S run on Lithium-Ion batteries while Genius EV runs on deep-cycle (lead-acid) ones. (READ: Why your smartphone battery still sucks – and who’s doing what?)

With its current travel range, the Genius EV appears to be apt for city driving. In a city like Metro Manila where 85% of air pollution is said to come from vehicles, having more cars on the road with environmental dreams is a welcome development.

Sky-rocketing fuel prices in 2006 and his love for the environment were among the main motivations of Lagangan for developing an electric car.

“The fuel prices went up to about Php 46 per liter at the time and I thought, maybe I should design a cost-efficient car. Then there’s the irreversible impacts of climate change, of pollution, so I thought I should focus on an electric car,” The self-confessed auto enthusiast Lagangan said. 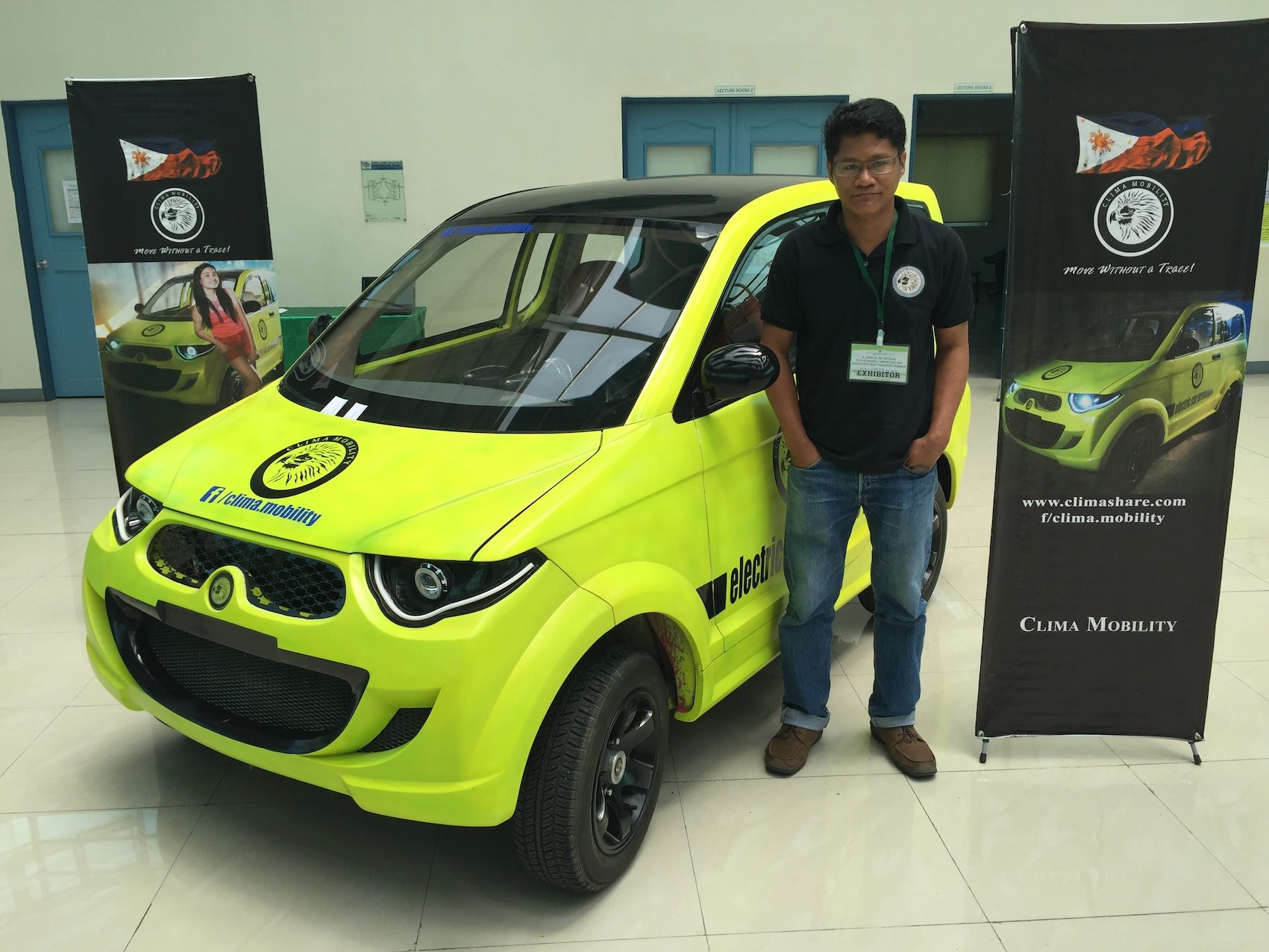 While electric cars do not have tailpipe emissions, their power sources do. Their potential to reduce carbon emissions is largely dependent on the supply of electricity that charges the battery.

An international independent research group Shrink That Footprint reported that as of 2012, the electricity used to drive a kilometer in Paraguay can generate less than a sixth of a gram of carbon emissions, making it the country with the least driving emissions. Paraguay produces hydroelectric energy that is five times more than what it consumes.

The Philippines has a long way to go to reach that level as the country is still fossil-fuel dependent.

In 2015, the Philippines got 68% of its electricity from fossil fuels – 45% from coal and 23% from natural gas. In contrast, the share of renewable energy sources – wind, solar, and biomass – is a meager 2%.

The Land Transportation Authority lists a total of 7.69 million registered motor vehicles in the country, nearly a third of it (2.1 million) are registered in the National Capital Region.

While electric vehicles like the one Lagangan has developed shows promise in reducing our carbon footprint, a collective effort to minimize the country’s dependence on fossil fuels is also important.

A work in progress

The prototype looks similar to the ultra-compact EVs built by Smart Automobile – a German company operated by Daimler-Chrysler, which is most famous for its Mercedes-Benz brand.

But Lagangan has made a few customizations such as a sunroof and an elongated back portion to make room for a family of four or five. About the former, the engineer muses: “I remember when I was working on the design, I was thinking of the parades schools used to have. I added a detachable sunroof so parents could use this vehicle for school activities of their children,” he said. The sunroof is just one of the many features a prospective buyer can add to the vehicle. Lagangan manufactures the Genius EV on a build-to-order basis, and allows for customization. The engineer himself continues to customize and improve the vehicle, considering it a work-in-progress. Work on the machine started in 2009, with the then-OFW designing and assembling the machine whenever he could sneak in some time.

Now, he is in search of grants and funding to improve manufacturing capacity for the said model and his company, Clima Mobility.

Clima Mobility is just one of the companies in this sector. According to the Department of Trade and Industry (DTI), there are currently 28 firms engaged in the manufacturing of e-vehicles in the country, 11 parts and component manufacturers, and 7 importers. The number can only grow if DTI’s projection holds true. They see the market for e-vehicles to grow from selling 38,220 units in 2013 to 69,145 units in 2017. The use of e-vehicles as public transport can now be found in Naga City, Mandaluyong, Boracay and Cavite to name some, acquiring a number of e-vehicles such as e-trikes and e-jeeps. Schools such as the University of the Philippines Diliman (E-kot) and Ateneo de Manila University have their own e-vehicles as well.

As seen in these examples, the e-vehicle industry in the Philippines is currently focused on e-jeeps and e-trikes, making Genius EV potentially the first e-car manufactured and sold in the country.

Lagangan adds that aside from its function as a family car, he envisions his model as a viable mobility option for local government units, government agencies, and the barangay.

Taking into consideration its appications and goals, Clima Mobility’s Genius EV is still just a piece of the puzzle. But what’s more important is that it’s a brave, well-meaning project – an affordable, environmental EV for the Filipino family with other potential applications – from a man following his passion for car-making, looking to make a positive impact on the Filipino life. – Rappler.com

You, too, can make innovation happen. Click here to start your career in the sciences through the Rappler x Kalibrr Job Board.