Rappler CEO and Nobel Laureate Maria Ressa in her acceptance speech for the Woodrow Wilson Award at Princeton University, February 19, emphasized that the violence one sees online and real-world violence are one and the same.

“There is no difference between online violence and our physical world. They are one in the same. Online violence is real world violence. If you can make people believe lies are facts, you control them. This is why we have the rise of tyranny all around the world,” Ressa stated. 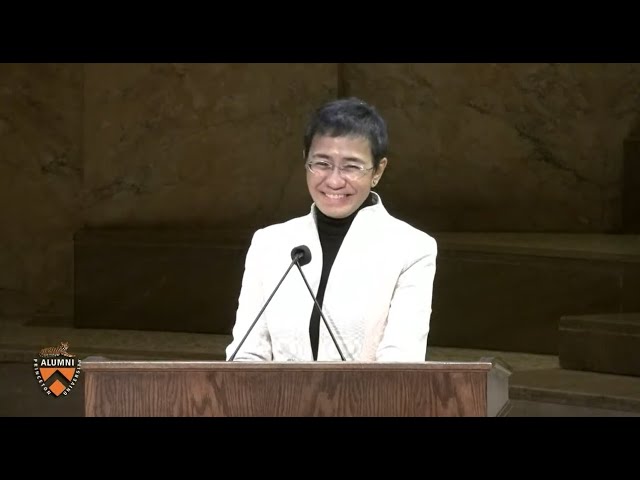 It was an important reminder of a key element of disinformation, fake news, and information operations around the globe – that ideas seeded online can translate to real-world action, or physical violence and aggression.

Often, threats or aggressive statements made online can seem a little less harmful than a physical real-world encounter. But that is not to say that hateful sentiments and rhetoric made on digital platforms do not have an effect on real-world violence or aggression towards a person, country or organization. Disinformation narratives are seeded online that can metastasize in the physical world, leading to real-world harm.

Ressa – along with her personal experience of receiving an enormous amount of hate messages in the past for her and Rappler’s stories on the internet being weaponized back in 2016 – recalled several big examples of information operations being used as one of the weapons to stir its audience, leading to real-world harm.

The Rohingya genocide in Myanmar was enabled by online information operations that incited hatred towards Rohingya Muslims, leading to real-world persecution. In the US, the “Stop The Steal” narrative in the US found its way on online platforms where it grew as a movement falsely challenging Joe Biden’s victory in the US elections of 2020, that later translated to real-world harm during the US Capitol riot on January 6, 2021.

Disinformation narratives manipulate behavior, prodding people to act in ways that benefit the architects behind the information operations, and harm its targets.

Social media companies remain a key player in the spread of these disinformation narratives, as Ressa reiterated in her speech. These companies have focused on content moderation to battle disinformation, but Ressa says the root of the problem is still the underlying system of surveillance capitalism. Surveillance capitalism is “when our atomized personal experiences are collected by machine learning, organized by artificial intelligence, extracting our private lives for outsized corporate gain; highly profitable micro targeting operations are engineered to structurally undermine human will,” Ressa explained.

Ressa said that content moderation is indeed important but the root cause, the underlying incentivized data-collecting system, has to be addressed, perhaps by a “new global coalition.” Ressa reminded the audience that Woodrow Wilson during his time “also enacted laws like the Federal Trade Commission Act and the Clayton Antitrust Act” where “he reclaimed power from huge corporations and promoted competition.”

Tech giants, because of their overwhelming influence on the market and how the current system incentivizes data collection, need to be reeled in.

Ressa recalled how in her Nobel lecture, she said that “an atom bomb has exploded in our information ecosystem.” Throughout history, authoritarian leaders have always found a way to lie, and to manipulate. With online platforms and how these platforms operate, these authoritarian leaders simply found a way to supersize lies to become disinformation nukes, destroying truth and the fabric of democracy; an online explosion rippling through the physical world.

The question remains: Authoritarian leaders will behave according to their nature, but what can be done to power down the superweapon that is social media? How can social networks’ power as a weapon of mass manipulation be neutralized?

By now, these are old questions. But they’re questions that apparently we still haven’t found clear answers for. “I’ve said this sentence now, repeatedly over the last six years without facts, you can’t have truth. Without truth. You can’t have trust. Without these we have no shared reality, no rule of law, no democracy,” Ressa said – a quote that will have to be repeated over and over again until, among other factors, there is definitive regulation that shuts down the goldmine that is surveillance capitalism.

Until then as Ressa said in her speech, “we are Pavlov’s dogs experimented on in real time.”