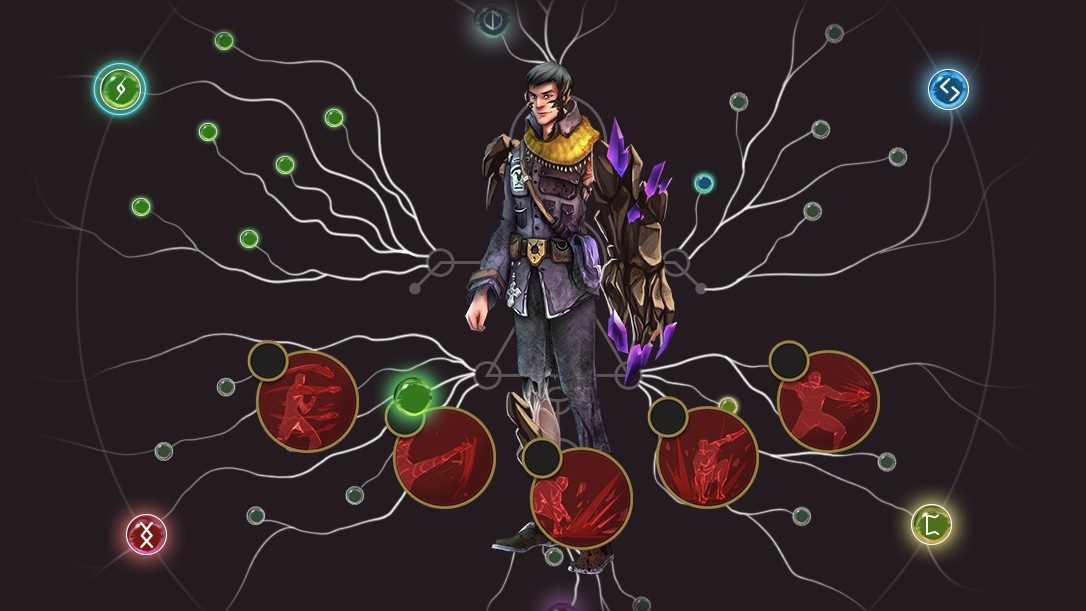 NATHAN. A character in the RedShield Games project appears in this image along with a concept illustration for the game's skill tree

Facebook Twitter Copy URL
Copied
'We want people to buy into our ideas, before they buy our NFT. We don’t want to hard-sell our game,' says RedShield Games founder Wayne Fun

MANILA, Philippines – Malaysia-based RedShield Games, a game development studio with currently more than 20 employees led by its founder and creative art director Wayne Fun, on Friday, May 27, hosted an event announcing its upcoming NFT play-to-earn gaming project to the media, and gathering its army of young influencers called RedShield Ambassadors to eventually promote it.

The gaming project is also currently called RedShield Games. It will be an open-world turn-based RPG that will allow future players to earn an in-game token that they can either spend in the game or convert to fiat money – similar to Axie Infinity, the world’s most popular NFT game, and the SLP in-game currency that players earn by winning, and can later be converted to fiat money or used to breed new playable Axie characters.

The tokens in RedShield are the RedShieldX (RSX) token, and a governance token that theoretically, like Axie Infinity’s own governance token called AXS, would allow token-owning players of the game to have a say in key matters regarding the game’s development and management, among other things.

The game will be set in a “dystopian universe in the 1940s during World War 2,” except in this case a secret experiment involving super soldiers goes wrong, changing the face of the earth forever.

The game is currently early in development, and no actual gameplay was shown yet at the event. The basic mechanics of the game were discussed, featuring a turn-based battle system similar to those found in traditional role-playing games, learnable skills, and body parts that can be upgraded through the currency earned in-game.

While the studio did not show gameplay footage yet, some character and concept art were shown. “We actually spent a lot of effort designing the back stories and the character design. The core gameplay is the fighting and strategy mechanism so each character has to be unique. It has to be aligned with the World War setting in the 1940s – the psychology, down to what they wear,” Fun said.

The studio is looking at a Q1 2023 release for mobile devices, and a PC release later on.

Before the release, the studio is looking at what is called an “initial DEX offering,” which is a method of crowdfunding for blockchain-based projects done also through the blockchain, involving the offer of a token to the community.  The studio will also be holding an NFT pre-sale, meaning they will be selling the game’s NFT characters prior to the game’s release.

A player will have to purchase at least one NFT character to start playing the game similar to Axie Infinity requiring at least three Axie NFTs to play.

The whitepaper for the game discussing its roadmap and economics can be found here, while its official site is here.

Launching a successful NFT-based game is not what you’d call easy. Even the most historically successful of them, Axie Infinity, due to a host of reasons, has seen the value of its in-game token SLP dive to a point where it’s no longer viable for most to earn from.

The 14-year Malaysian game design veteran, Wayne Fun, in an interview said, he is aware of the challenges. According to him, they’re playing the long game with this one. “We are looking at it in the long term. We are not aiming at the short term. We believe that NFT games will be here for the long term because we believe that it makes more sense for a gamer – even non-professional ones – to play something and earn something out of it, rather than purely spend on and play a game.”

One thing that Fun doesn’t want to overlook is, pun not intended, the fun aspect of the game. At times, the alleged money-earning potential of a game can override the element that makes a videogame – traditional or otherwise – worth our time: how fun it is. Fun wants to avoid that.

“If you look at our tagline, it’s ‘fueled by gamers, built for gamers.’ We target all gamers first. We want people to buy into our ideas, before they buy our NFT. We don’t want to hard-sell our game. We’re really looking for people that will look at our [game] ideas, at the concept, at the artwork, and like them. [And then because they like it], they will buy our NFT. The game mechanism is the most important – whether it is fun or not,” Fun explained.

Fun also said that they chose the Philippines as the first country for their launch “because when we started prep work, we got a lot of feedback from the Philippines, and found that the players here are more educated when it comes to the play-to-earn market.”

“We want to make a game that is fun. That is the core,” Fun said. – Rappler.com