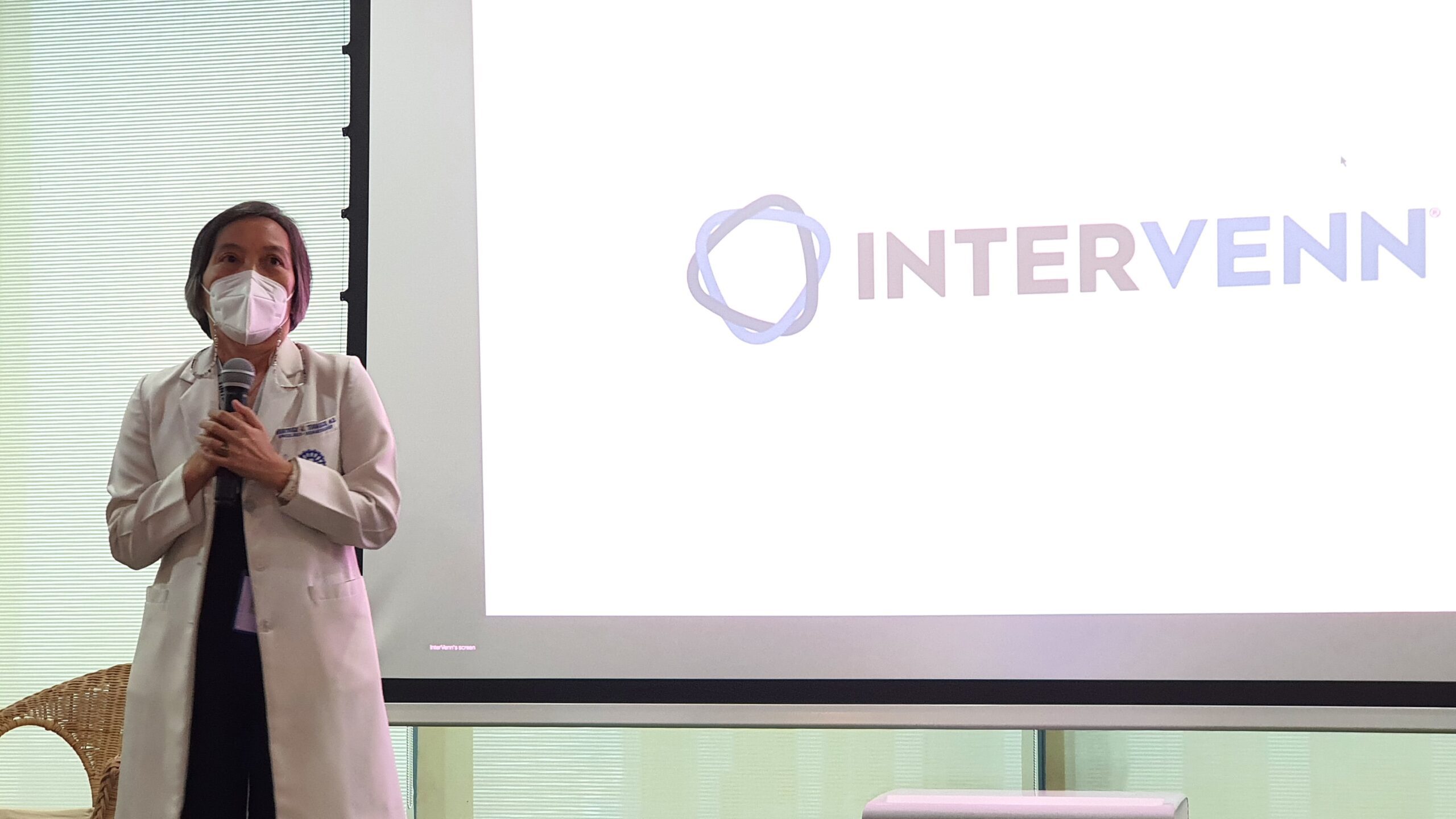 INTERVENN. Dr. Beatrice Tiangco speaks at the launch of the Philippine office of biotech firm Intervenn. Tiangco, a consulting scientist for the firm, is a former president of the Philippine Society of Medical Oncology, and current consultant director of the Augusto P. Sarmiento Cancer Institute of The Medical City in Pasig

Facebook Twitter Copy URL
Copied
The liquid biopsy test is non-invasive, and is being designed to produce much quicker results

Though the company is headquartered in San Francisco, California, the team that developed and maintains the proprietary AI technology that speeds up certain research processes for the company is made up mostly of Filipinos residing in the Philippines, including one of its founders, AI and blockchain expert Aldo Carrascoso.

The company has about 150 Filipinos working in the Philippines, majority of whom are software developers, and who make up half of the company.

Through the help of the company’s advanced AI platform, the company is able to help its global groups of researchers and scientists significantly reduce the time it takes for some processes such as analysis of samples from months to seconds.

It’s through this meaningful application of AI that the firm has been able to make strides in the field since its founding in 2017, as well as strides in funding. In 2021, the company received a funding of about $201 million, following earlier rounds of $9 million in 2019, and $34 million in 202.

“InterVenn has made significant progress in early cancer detection thanks to the brilliant and dedicated Filipino engineers we have on board. They helped build and maintain the front end, back end, and cloud infrastructure of our next-generation liquid biopsy,” said Carrascoso.

“One hundred percent of our software is proudly Philippine-made. We started this venture with the goal of not just having the means of finding a cure and early detection of cancer, but to also showcase to everyone that we Filipinos can achieve this on a global scale,” said InterVenn Philippines general manager, Axel Kornerup, a tech entrepreneur who has founded five companies including internet cafe chain Netopia.

That next-generation liquid biopsy cancer diagnostic test was among the company’s products that got the audience most excited at the office launch.

Specifically, the liquid biopsy that the firm is currently developing is for ovarian cancer, with earlier stage studies also currently being done for liver cancer.

With the company’s liquid biopsy, the company promises that it would only take a drop of blood to discover whether a person has cancer. Procedurally, the test is requested by an oncologist after, for example, finding an abnormal mass in a person. The traditional biopsy, as explained by InterVenn consulting scientist Dr. Beatrice Tiangco, requires surgery and is invasive.

She said that this is especially a concern for potential liver cancer patients wherein the benefits of getting a sure diagnosis via a tissue biopsy – which requires a surgical procedure – can be outweighed by the risks of such an operation.

She said there is a great fear among Filipinos regarding surgical procedures to get a biopsy. While it is still scary for some to get a diagnosis whatever the procedure is, getting one through a quick finger prick rather than a full surgical procedure sounds like the more pleasant option.

While traditional tests would take at least 7 days to get a result, the new liquid biopsy test may be able to reduce that to minutes or seconds, says Tiangco.

Glycoproteomics is at the core of the company. In its company bio, it calls the glycoproteome “a source of life-critical information that has the potential to significantly improve patient outcomes, but it has remained inaccessible due to its vast complexity,” and the company’s AI platform is looking to “decode and unlock” its potential.

The test is called GLORI, which the company says is the first glycoproteomic, liquid biopsy, laboratory-developed test (LDT) for ovarian cancer diagnosis.

To be clear, the test is still in development, and there is no clear date for availability, although the firm said that maybe by the middle of next year, they would have something to announce. Erwin Estigarribia, the firm’s chief operating officer, said, “This is not a sprint. This is a marathon, and our goal is to exceed the accuracy of traditional diagnostics with a test that just needs a single drop of blood.”

With the promised convenience that such a test would bring, Estigarribia said that it would be something that could be added to an annual physical exam.

Asked whether the test is similar to a COVID-19 antigen test, Estigarribia said that while down the line, a home testing cancer kit is possible, what they’re trying to achieve right now is to reach the level of accuracy that an RT-PCR test has, which is often used as a validatory test after getting a positive antigen test.

For pricing, the team did not yet provide specific numbers but Carrascoso said that they are looking to find a price point where even fishermen in Philippine provinces would be able to afford it.

For the ongoing research, InterVenn is working with oncologists from 3 major hospitals in the Philippines, the National Kidney and Transplant Institute, The Medical City, and PGH. – Rappler.com