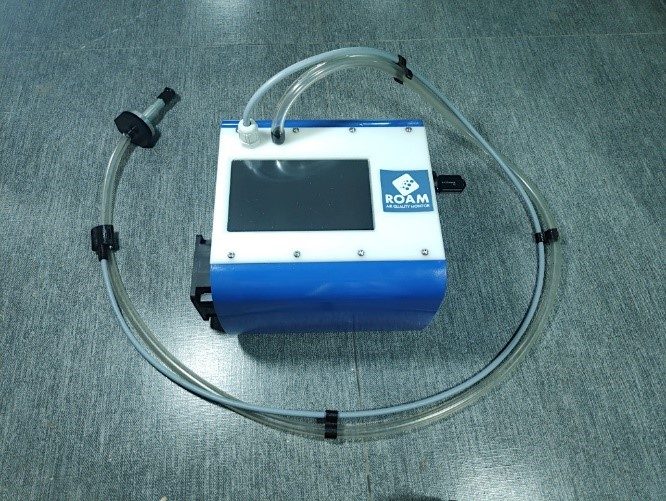 ROAM DEVICE. The locally made air quality monitor is cheaper and has local servicing

Facebook Twitter Copy URL
Copied
The Robust Optical Aerosol Monitor (ROAM) made by UP researchers is being deployed in Agoncillo in Batangas, and Alfonso in Cavite

The Department of Science and Technology (DOST) on Monday, July 12, announced that locally developed air quality monitoring units called Robust Optical Aerosol Monitor (ROAM) are set to be deployed in two Taal-affected municipalities: Agoncillo in Batangas, and Alfonso in Cavite.

The ROAM monitors are said to be the first Filipino-made devices of its kind, and are much cheaper compared to imported ones. The devices measure the particulate matter in the air, and can send the statistics to an app to inform users. Another advantage of the device is that servicing and product support will be locally available.

“ROAM units use a different method in detecting particles that does not require the manufacture/fabrication of specialized parts typical of contemporary commercial instrumentation. This allows a much lower production cost, smaller maintenance requirement, and an exclusive research chain,” said Len Herald Lim, the project lead among a group of researchers from the University of Philippines Diliman.

The device was developed in partnership with the Department of Science and Technology – Philippine Council for Industry, Energy and Emerging Technology Research and Development (DOST-PCIEERD).

The DOST said the impetus for developing the device was to make a cost-effective way of gathering and providing crucial environmental information that would help in creating policies for environmental protection and in looking for solutions to reduce pollution in workplaces and communities.

Now, they are being deployed for emergency use in the said localities to help residents know how polluted the air is with particulate matter, aside from the other dangers that the Taal Volcano presents.

The deployment in the Taal-affected communities may also be an opportunity for the device to be tested further in a challenging environment as the project seeks to advance the commercialization of their technology.

Amid the Taal rollout, Project ROAM is also currently exploring the creation of a spin-off company through the DOST-PCIEERD’s Funding Assistance for Spinoff and Translation of Research in Advancing Commercialization (FASTRAC) program, which require real-world deployment and free use of the device for a year by other organizations. – Rappler.com