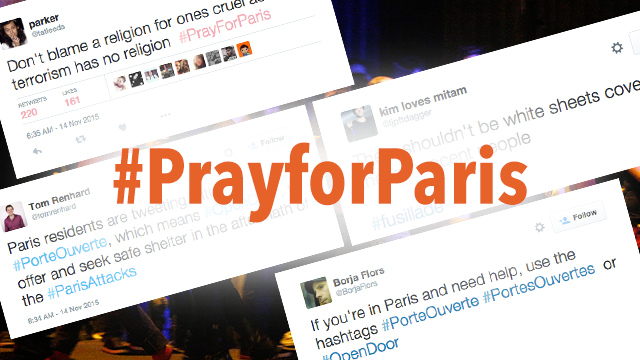 #PrayForParis became the top trending topic in the Philippines, while #Fusillade topped the Twitter trends in Paris. Keywords related to the terror attack also dominated the worldwide trending topics.

Here are some of the tweets from netizens around the world:
A Collection on Twitter
Parisians open their doors to strangers


Meanwhile, netizens maximized the reach of social media as #PorteOuverte, which translates to “open door,” became the hashtag for anybody seeking and offering help and shelter.


Below are some of the tweets:

“Quickly find and connect with friends in the area,” a message on the Facebook Safety Check page read. “Mark them safe if you know they’re OK.”

The feature also allowed people to check which friends listed as being in Paris, had not yet checked in as safe.

‘Worst tweets’ about the Paris attacks

While many are expressing concern about the terror attacks, there were still a few insensitive remarks tweeted, as compiled by motherjones.com and fusion.net:

What are you feelings about this latest string of attacks on the French capital? Share them on X. – with a report from Agence France-Presse/Rappler.com