‘Let that sink in’: Filipinos react to Mocha Uson appointment 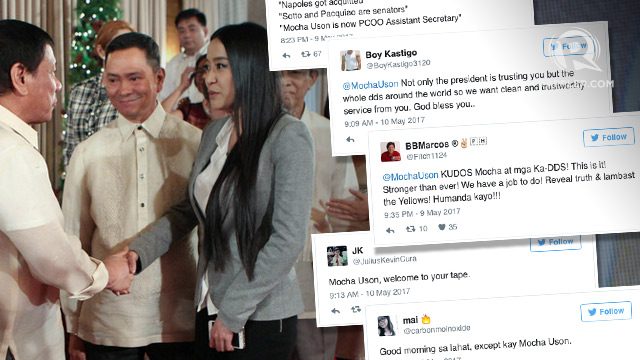 MANILA, Philippines – Mocha Uson was named assistant secretary of the Presidential Communications Operations Office (PCOO), an appointment that raised not a few eyebrows. 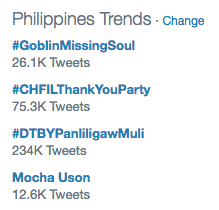 On the Rappler Mood Meter found in the article about the PCOO appointment, the reactions varied, but most readers voted that the news left them feeling angry.

On social media, people met the news with starkly different reactions. Since the announcement was made late Tuesday afternoon, May 9, Mocha Uson has become a top trending topic on Twitter.

Some people were outraged and baffled.

Mocha Uson's (@MochaUson) appointment sends a clear msg: YOU DON'T HAVE TO BE COMPETENT FOR THE JOB, YOU JUST HAVE TO KISS SOMEONE'S A**.

An Assistant Secretary has a salary grade 29 and earns Php 106k a month.

Part of our taxes pays Mocha Uson's salary. Let that sink in.

'Cause if not we have a serious case of corruption here.

Others pointed out the state of the Duterte administration as a whole. This included the recent rejection of Gina Lopez as environment secretary, among other things.

People I am now paying:
– a boxer
– a rapist misogynist pig
– whatever Mocha Uson is

Uson’s supporters, of course, were pleased.

@MochaUson Not only the president is trusting you but the whole dds around the world so we want clean and trustworthy service from you. God bless you..

@MochaUson KUDOS Mocha at mga Ka-DDS! This is it! Stronger than ever! We have a job to do! Reveal truth & lambast the Yellows! Humanda kayo!!!

They also defended her against the naysayers.

The day after the announcement of Uson’s appointment, those who were not amused greeted everyone (except the new PCOO official) a good morning.

except kay Mocha Uson, Duterte, and his cohorts.

Some comparisons were made between reality and fiction.

Mocha Uson, welcome to your tape.

Someone even suggested a new career path for Uson.

This isn’t the first time word of a government post for Uson caused a stir online.

In 2016, a rumor that she would be the Bureau of Customs’ social media consultant spread across the internet. Netizens used #DutertePleaseAppointMe to hilariously make their case for their own government positions.

Last January, Uson went viral again, this time when she was appointed board member of the Movie and Television Review and Classification Board (MTRCB).

What are your thoughts on Uson’s appointment to the PCOO? Write an article on X! – Rappler.com