For the LGBT community, pride is the opposite of shame 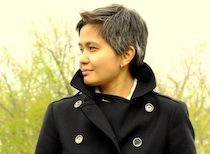 Facebook Twitter Copy URL
Copied
LGBT pride means claiming that our lives, relationships, and families are valid. It's showing the world that we are not afraid, that we will no longer hide and feel embarrassed for who we are and who we love.

In the past year, two successful teleseryes have had same-sex relationships as major themes. LGBT youth are more out and proud than they’ve ever been. The gay community is also learning to harness their financial power, and companies have even started listening to their LGBT employees’ requests for equal workplace benefits.

The US supreme court will likely make same-sex marriage a reality for all 50 states next week, and this will have both legal and cultural implications for Filipinos.

With all of these developments, one may think that gay pride celebrations are unnecessary, and that discussing gay rights is now passé.

Is there no longer a need to celebrate our diversity?

One of the first things learned by gender non-conforming children is shame. Along with admonitions about hitting, lying, or wasting food – is the lesson that certain things are for girls and certain things are for boys. Some parents are better at this than others, but before these children reach the age of ten, an adult around them has most likely made a negative comment about what they consider to be an inappropriate gesture or a statement for their particular gender.

It’s worse for effeminate boys than boyish girls, but both bear the brunt of bullying, isolation, and negative reinforcement. Early on, we learn that saying you have a crush on a fellow girl or a fellow boy is met with such dramatic reactions that you know it’s something that shouldn’t be spoken. Meanwhile, a typical girl or boy can talk on and on about their crushes. They can write their crushes’ names in their notebooks. They enlist the help of their parents to write love letters. A mother will help a boy pick flowers for a girl. A dad will give a girl lessons on how to deal with male suitors.

For LGBT youth, loving becomes a secret. It becomes hidden, unspoken, and an untapped desire. From the simplest attraction to the first pangs of love, we learn early on that we are alone in it. No adult will support our deepest feelings, and we might even be thrown out of our homes if we’re found out. Worse, many of us are taught that loving someone of our own kind leads to eternal damnation.

It was easy to figure out that to be able to fit in, we had to hide who we were and change our actions and mannerisms in order to be socially acceptable. We internalized the shame our friends and families felt about us. We felt ashamed of ourselves, our nature, and the people we love. We assumed a different persona so that we’re not halata (“obvious”).

Those who are not gay, lesbian, bisexual or transgender probably won’t be able to empathize with what it’s like to grow up with a different orientation or gender expression. It’s difficult to know how it feels to be told things like, “Mahiya ka nga! (Be ashamed of yourself!)”, “Huwag ka ngang gaganyan-ganyan. (Don’t be that way.),” or “Kadiri ka ha. (That’s disgusting.)” about things that are simply our nature.  We develop a strong hatred for ourselves, and for our fundamental feelings of love and attraction – because whenever we express ourselves it is met with such dismay.

Shame is a powerful thing. In my conversations with LGBT youth and even adults there is often a sense of self-loathing and a certainty that expressing their true selves means losing the affection of their families. We carry shame into our relationships as well, choosing partners who reinforce our feelings of guilt and disgust for our bodies’ urges or the callings of our hearts. We live in secrecy, pursuing double lives and passing on parenthood and marriage because we are convinced the family we want is not a possibility. Many of us spend our lives wishing we could love freely, at the same time convinced that this kind of life is sinful and morally corrupt.

It is difficult for a person steeped in a heteronormative society to fully understand the LGBT struggle. All popular love stories are heterosexual. Sexually suggestive billboards may only star a man and a woman. These images are considered acceptable, and yet in the lesbian-themed teleserye, the two female protagonists will likely never even kiss due to MTRCB regulations.

What is our recourse when we are hated and discriminated against because of our fundamental selves? It’s just too easy to echo those around us and feel sorry for who we are and let others decide the course of our lives. In order to not rock the boat, it is convenient to not stand up for ourselves. The easiest route would be to blend in and go along with traditional roles for fear of rejection and isolation.

Our biggest and most powerful weapon against shame is pride.  LGBT pride means claiming that our lives, relationships, and families are valid. It’s showing the world that we are not afraid, that we will no longer hide and feel embarrassed for who we are and who we love. We will also no longer let another person’s shame be our own.

Pride is a powerful thing. For LGBT youth to witness a pride march can be life-changing. It definitely was for me in 1999, when I was a young lesbian worried about the repercussions of being out and proud. For a young person to see the different kinds of LGBT people as a united group (and haters as the outnumbered laughable minority) only reinforces one’s feelings that he or she has his own important place in this world. More importantly, we learn that we are not alone.

Hate crimes still exist. One in 10 Filipino LGBT youth have been abused in their own homes.  While transgender women are being refused entry to clubs, noontime shows tell gay fathers to go back in the closet, and  two men holding hands is still considered unsightly, we have a long way to go before shame is erased from our surroundings and in our own minds.