In the wake of 4 typhoons that devastated the Philippines in a two-week span, numerous areas in the country were left submerged, with hundreds of thousands displaced and the death toll still rising. As the country reels from the effects of the typhoons, people have taken to social media to share stories of suffering, and appeals for relief and rescue for those affected. Interspersed between these appeals are calls from netizens not to “glorify resilience.”

Understanding the context also means taking stock of our experience with how the government has handled disasters. For a country that is regularly battered by typhoons, the government has failed to keep up with the alarming rate of climate change. Despite the abundance of champions of the environment and climate justice, our policies, infrastructure, and general preparedness have always been wanting.

The issue goes beyond preparedness for environmental emergencies. Lack of sustainable urban planning has resulted in a failure to control urban sprawl, a key issue in prevention. Even the national and local government capacities to effectively handle post-disaster rehabilitation and reconstruction have been criticized. Moreover, our leaders’ seeming ineptitude in crisis governance and allegations of mishandling of funds that at times follow disaster rehabilitation and reconstruction efforts make matters worse. It is then the height of brazenness when it is our own government leaders who extol narratives of Filipino resilience.

Even when the glorification of resilience is done by members of the public, problems may still arise. There is no denying that typhoons (and disasters in general) affect people of different socio-economic status disproportionately. It is the poorer families and individuals who often find themselves in more vulnerable situations, not by choice but out of necessity. In addition, their insecurity also makes it more difficult for them to recover after disasters. Hence, while disasters cannot discriminate, our country’s socio-economic development does. Therefore, one must bear in mind that having the luxury to glorify resilience comes from a position of privilege.

An intimately related concept that is also used interchangeably with glorification is the concept of romanticization. Romanticization is said to “manifest itself through assimilation or internalization of an event by individuals or a community to obscure its negative implications.” To romanticize resiliency is to present the resilient Filipino as the desired image of a disaster victim — one who survives.

[ANALYSIS] Filipinos aren’t so much resilient as Duterte is incompetent, abusive 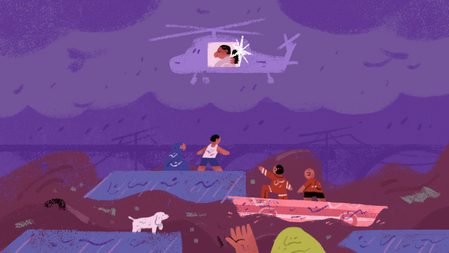 Given this backdrop, we can problematize the glorification and romanticization of Filipino resilience for the following reasons:

First, it detracts from the suffering and trauma that victims of disasters are experiencing. It diminishes the sufferings and trauma experienced by the victims. While one can certainly praise resilience while also raising awareness for the victims’ sufferings and trauma, in this context, glorification and romanticization add nothing to the discourse on how to alleviate the harsh realities that victims face. It is ironic that while narratives of Filipino resilience earn them admiration and attention from the public, it does not offer anything tangible that they deserve given the urgency of their situation.

Second, it undermines the importance of immediate action by overemphasizing the image of a Filipino who is able to survive in spite of his/her circumstances, rather than that of a Filipino who is able to survive because he/she is given the support he/she deserves. It shifts the accountability to the victims by implying that overcoming their suffering and trauma is a matter of choosing to be resilient, when in truth, the victims have diminished agency as a consequence of their socioeconomic status or because regardless of the choices they make, institutions have failed to prepare them from the negative consequences of natural disasters. No one chooses to be vulnerable, but the structural causes of their insecurity have forced them to be locked in with few to no options.

Third, it normalizes the vicious cycle of displacement due to disasters – as if those in vulnerable situations should just accept and get used to the experience of displacement every time disasters hit the country. This can lead to an overemphasis on the crisis management component of disaster management over risk management. Focus is primarily placed on assessment, response, recovery, and reconstruction stages while mitigation and prevention, preparedness, and prediction stages are given less attention.

Fourth, the resilient Filipino – one who overcomes in spite of – is idealized at the expense of those who are unable to overcome their sufferings and trauma, further victimizing them. By implication, the victims’ inability to overcome is seen as a weakness and that their own sufferings and trauma are imputed to their own actions. What about those who lost their lives?  Are they mere statistics that are included in reports and then later forgotten?

Finally, the notion of Filipino resiliency as it is portrayed in the mainstream is limited to the idea of resiliency as a virtue, as something that is characteristic of a Filipino. The image of the Filipino who is able to keep faith and overcome his/her hardships is celebrated in popular culture. But the resiliency in the context of disaster risk reduction and mitigation goes beyond that. It includes the capacity of communities (and the country as a whole) to adapt to and recover from disasters or calamities. Government preparedness is a key element of disaster resilience.

In conclusion, while accountability is not solely on the government, the duty of the government to serve and protect demands that our leaders should bear most of the responsibility and accountability. This is especially true in cases where natural disasters may become man-made calamities due to government negligence. While the aim is not to downplay the will and spirit of the Filipino to survive, our experience with government failures and the exploitation of Filipino resilience necessitates challenging the dominant narrative.

As for offering an alternative to the glorification and romanticization of Filipino resilience, we should challenge the dominant narrative by promoting a discourse beyond resiliency as a virtue. The discourse should be on the kind of resiliency that puts the emphasis on building institutional (i.e., structural) capacities at both local and national levels to adapt and recover. Governance and leadership should also improve to allow for inclusive resilience – one that gives voice to marginalized sectors of society. Individually, we can help amplify the voices of the victims and survivors by echoing their calls for assistance, and helping them voice out their narratives of suffering and trauma. This way, they can take back their agency and challenge the dominant narrative of what it truly means to be a “resilient Filipino.” – Rappler.com

Abu Al-Rasheed T. Tanggol is the Peace Action Coordinator at the Institute for Peace and Development in Mindanao and Associate Lecturer at the Department of Political Science, Mindanao State University-Iligan Institute of Technology. He’s been involved in different disaster relief operations in the past for local and international organizations.