[ANALYSIS] Filipinos aren’t so much resilient as Duterte is incompetent, abusive 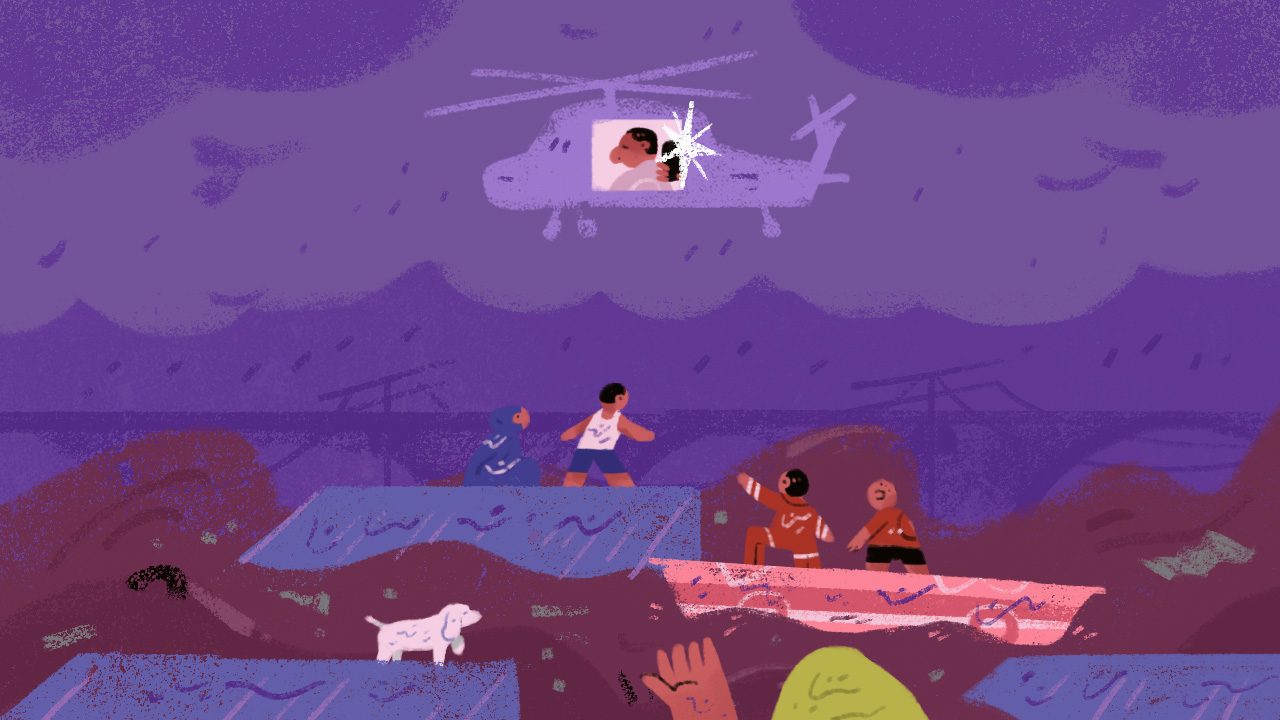 2020 is a proving to be a bottomless well of disasters. The biggest of all is Duterte himself.

On the night of Wednesday, November 11, Typhoon Ulysses began to pummel Metro Manila and nearby provinces. Winds howled. Trees fell. Rivers overflowed. Waters rose alarmingly fast in the dark. Lots of people were forced to climb to their roofs or otherwise flee to evacuation areas. The damage wreaked was at par with Typhoon Ondoy back in 2009, arguably worse.

Duterte is at fault on so many levels.

First, in all this, he was missing yet again. As with Typhoon Rolly — which had stronger winds but weakened quickly after successive landfalls — Duterte addressed the nation after the typhoon had passed, not before. Duterte also contented himself with a quick aerial inspection of flooded areas aboard a helicopter, and not much else.

In his statement, Duterte said he himself would like to join people in the floodwaters, but he’s being prevented by his staff.

Literally no one is asking that he wade in the waters, too. At the very least, in a press conference he could have simply warned the public about the impending calamity and outlined his government’s preparations.

A lot of suffering could also have been avoided had our people received sufficient reports.

But with ABS-CBN’s franchise denial in July, people who used to rely on the network’s extensive reach and coverage on TV and radio found themselves listening only to whistling winds and the roiling waters — learning about the typhoon too late.

The information deficit on Typhoon Ulysses led to needless misery, caused in part by Duterte’s pointless persecution of ABS-CBN.

Second, the Duterte government has underfunded disaster efforts of late.

The graph below shows that Congress allocated P4 billion less for the National Disaster Risk Reduction and Management Council (NDRRMC) this year compared with 2019. That’s the first budget decline of the NDRRMC since its inception (that is, if you don’t count the special P18.9 billion fund allotted in 2016 in the aftermath of Typhoon Yolanda).

But, at the same time, he said they won’t likely touch the P19.1 billion that will be allocated for the National Task Force to End Communist Local Armed Conflict (NTF-ELCAC) — an anti-insurgency committee engaged in red-tagging and propaganda.

That P19 billion is no joke, and the whole amount will be much better repurposed to augment disaster relief efforts, as well as the COVID-19 response.

In a 2017 policy brief by the Senate’s think tank, among the key challenges faced by the NDRRMC include weak coordination with stakeholders; low prioritization and lack of human resources and technical knowledge in local government units (LGUs); poor implementation of DRRM-related laws; lack of access to timely and useful data; and excessive focus on disaster response rather than preparedness.

Typhoon Ulysses brought to light many of these problems.

Many mayors found themselves “overwhelmed.” Marikina Mayor Marcy Teodoro said he got boats and other aid from NDRRMC “with the intercession of Senator Bong Go.” The deputy administrator of the Office of Civil Defense also claimed they were “not actually caught flat-footed,” but went on to blame hard-headed citizens and LGUs not compliant with disaster protocols.

To abate some of these issues, some lawmakers propose a Department of Disaster Resilience. But there’s no assurance at all that this will improve coordination among stakeholders. And the point is to empower LGUs, not concentrate functions and responsibilities in yet another national agency.

Before he steps down in 2022, can we still reasonably expect Duterte to beef up LGUs’ preparedness against future disasters?

Fourth, Duterte is giving mixed signals about his stance on climate change — regarded by scientists as a major force behind the increasingly dangerous typhoons coming our way.

Right before his belated public appearance on Thursday, November 12, Duterte was attending the virtual 37th ASEAN Summit where he made a rare, uncharacteristic call for climate justice.

He said, “We must amplify our voices to demand climate justice from those most responsible for this existential challenge we face today. Developed countries must lead in deep and drastic cuts in carbon emissions. They must act now, or it would be too late. Or if I may add, it is too late.”

Ironically, it was Duterte himself who, as recently as last year, lambasted climate change conferences as a “waste of time and money” and called climate scientists “noisy.”

His plea for climate justice is far from credible. He’d do better to walk the talk.

Fifth and last, the Duterte government has leaned too heavily on a toxic narrative of resilience. They like to boast endlessly that deadly pandemics and harsh typhoons are no match for the Filipino’s resilience.

Politicians, too, have often invoked the resilience card, most recently Speaker Velasco in the wake of Typhoon Ulysses. (He, by the way, is one of the proponents of the Department of Disaster Resilience.)

Sure, resilience sounds like it could be the source of positivity and Pinoy pride. But more often than not it’s used by government officials to mask and excuse their failures. They’ve also used that narrative to absolve themselves of their responsibilities, weakening (if not entirely extinguishing) public demands for accountability.

The truth is, Filipinos aren’t so much resilient as the Duterte government is incompetent, abusive.

When we’re habitually left to our own devices to cope with disasters without any guidance or help from government at all, that’s not resilience — that’s abuse, and we should all learn to call it that. – Rappler.com