[OPINION] Memories of my childhood in Provident Village Facebook Twitter Copy URL
Copied
'For others, my childhood in Provident Village could be deemed sad or traumatic. But for me, the village has lived up to its name.'

I grew up in a humble house, in a quiet and secure village where neighbors were friends, almost family. As I remember it, our house was very homey and welcoming, where friends loved to gather. My mom was such a stickler for cleanliness and orderliness that every single item had its place.

Growing up in an era when there were no computers, internet, or mobile phones, my afternoons and even weekends were spent walking or biking around the village. I hold very good memories of this place, where I lived in until I was 15. I grew up in Provident Village.

It has been more than 30 years since we sold our house in Provident Village, and I still feel a sense of nostalgia when I think about it. Seeing the devastation brought about by Typhoon Ulysses to the village (and to other towns in Marikina) brought back many memories, both happy and sad. It goes to show how much of our childhood experiences shape who we are now, consciously or unconsciously.

One thing I know: we can blame the residents for not heeding the calls to evacuate sooner, or even the government for not giving ample warning or sending rescue efforts quickly enough, but at the end of the day, the impact of this tragedy will not be diminished by resilience alone.

As a young child, I did not understand what caused these floods. I just witnessed our household and everyone else in the neighborhood move on after every calamity. We knew the drill whenever there was a threat: move the car to higher ground outside the village, walk back and wade through flood water, pack clothes and personal effects, and move to our neighbor’s house which had a second floor. Once the flood was over, we would clean up and move on.

We only have very few childhood photos left because most of them had been damaged by floods. In my recollection, too, major flooding such as the ones in 1978 and 1988 would happen close to my birthday. I remember my dad telling me how I was so special that the entire village had gotten a “chocolate cake” for me – the thick mud in the aftermath of the flood.

Surviving Ulysses: 13 people, 13 hours, and a rope of blankets 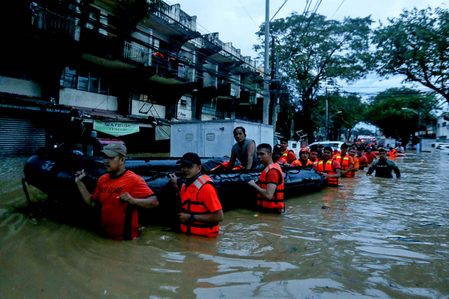 More than any other flood incident, it was the one in 1988 that had a big impact on our lives. I cannot recall the exact details then, as I was only 14. But I do remember that the flood waters rose quickly, and that the current was so strong that we could not move to higher ground. We had to stay on the roof of our bungalow house and watch as the rest of the structure got submerged in flood water.

We had a grand-aunt whom we fondly called Nanay living with us then, and who helped my parents raise me and my two siblings. Nanay didn’t know how to swim, and that experience in 1988 when she saw the flood waters rising so quickly had a tremendous effect on her, and she suffered a nervous breakdown. She was never the same person again, and she was eventually sent home to the province to be taken care of by family. After battling with Alzheimer’s Disease, she passed a few years after. Her moving away and eventual passing devastated me.

My mom, on the other hand, had always been the strong force in the family. In any crisis at home, including flood incidents, she was always on top of things. But she had just finished a major home renovation when the flood happened in 1988. The flood caused serious damage to our newly improved house, and it was as if her life’s work went down the drain. I saw how it affected her and changed her. A few months after, she became sick, and at first, the doctors could not figure out what was wrong with her. She was eventually diagnosed with liver cancer and died a year after that flood, again close to my birthday.

When my mom died, a lot of things changed for the family, and with a heavy heart, we decided to sell our house in Provident Village. I have lived elsewhere for more than 30 years now. Both my parents are gone. My eldest brother has since passed and my sister has moved to Canada. I live in the South in a nice, small townhouse in a village not threatened by flooding during heavy rains or typhoons. I keep our house neat and tidy just as my mom would have liked it.

Nonetheless, on the day Ulysses wreaked havoc and I saw houses in Provident Village being submerged in flood water, residents calling out desperately for help, and my own childhood friends narrating their ordeals, I felt a different kind of heaviness, sadness, and concern. And to think this is all happening in the midst of a global pandemic.

I have seen posts from people saying this always happens at Provident Village, asking in disbelief why residents don’t just move out, or why they did not evacuate sooner or heed the warning earlier. I don’t know the answers. But what I know is that when one deals with life-threatening situations, some things are easier said than done, especially if you have not experienced it for yourself. I think that not being able to make a decision to move out or let go of a house goes beyond attachment to a material possession. As a childhood friend in the same village said recently, maybe it’s sentimentality, of holding on to memories of a place where life, love, and even struggles were abundant, of knowing we will rise and rebuild after each and every fall, of a sincere hope that it will not happen again.

As we had done in the past in Provident Village, people will go back to their houses, clean up for days – even weeks – to get the thick mud out, rebuild, and slowly move on. You will admire their unwavering resilience, or maybe even criticize them or the government for it. But I know this event will change them as previous events have changed me, unknowingly or not. Their losses will be beyond the material possessions swept away by the flood, and their gains will be more than the reacquisition of items they have lost. Some will eventually move out just like our family did. But the life experiences and learnings, these you take with you wherever you go. There is indeed a reason for everything that happens in our lives.

For others, my childhood in Provident Village could be deemed sad or traumatic. But for me, the village has lived up to its name. My experiences have provided my future self with the desire to live simply, to practice kindness and generosity to others in the midst of difficulties, to bounce back after each fall, and to be grateful for the gift of life. – Rappler.com

Dinna Gamboa-De Guzman works as Chief of Staff and HR Director for a local property and hotel management company. Her parents built a house in Provident Village in 1970, where she lived until 1990. She now resides south of Metro Manila with her husband and daughter.