Facebook Twitter Copy URL
Copied
'It is going to be the most unjust thing that we could do for ourselves, our partners, and our children if we choose to start a family just because everyone else is progressing towards it or is pressuring us to have one'

I am a mom of one. My husband left our family when I was almost six weeks pregnant with our first (and most definitely, only) child. This is my third mother’s and father’s day.

Should I be worried?

Going through the emotional and mental turmoil of abandonment during my first pregnancy was one of the hardest, if not the hardest, life event that I had to go through in my 30-plus years of earthly existence. I wasted no time actively seeking strategies for making sense of it all and feeling better. I resorted to both Western and Eastern psychologies, philosophies, and anecdotes, stayed put in my faith, and also explored other faiths. Every day, it felt like swimming in a block of clay that wouldn’t move.

But then I gave myself a deadline: I had to achieve a better emotional and mental state before the baby arrived. Despite the physical, mental, and emotional challenges, I chose not to miss a day of work, afraid of lingering in a void that would make me falter in my quest to “get better.” Every second was filled with activity, whether it be a chore or a book to read. My 40-week pregnancy became an endless quest to nurse and nourish myself to prepare myself for my upcoming role. The last thing that I wanted to do was to suck my child into my mental and emotional turmoil, an environment that she definitely did not deserve to be in.

And then I gave birth to a tiny child. For six months, she was severely underweight. I owed this more to the stress that she also had to endure. But then after the six-month mark, her weight started to pick up, along with how I was starting to pick up my life, too. By the time she was a year old, she’d arrived at a healthy weight.

But going through all this made me ask something fundamental: was I unprepared for single parenthood, or was it because I was primed not to be prepared for it? 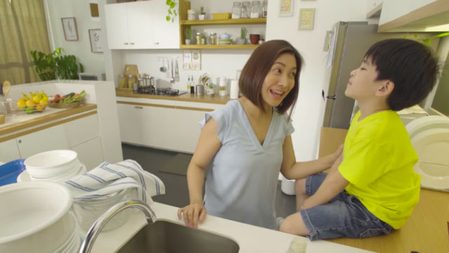 Even at an early age, we get the idea that a family consists of a father, mother, brother/s, and/or sister/s. In print and visual media, places of worship, and entertainment centers, we are drowning in images of the “perfect” family, so much so that any arrangement outside of it makes it different and an exception to the rule.

But the idea of a nuclear family is a new phenomenon. It only started to take hold after the world wars, with some pushing the timeline as recently as the Vietnam War, when men started coming home to their families. For a long time before that, it was the mothers, aunts, and grandparents who took care of the children and the household. Sometimes, fathers never ended up coming home, with the extremely high stakes of being conscripted to war. And even before that, it was mothers who were expected to take the primary role of child-rearing, hunting small game, and gathering grains, nuts, fruits, and vegetables, while fathers were expected to hunt big and small game and bring home protein to tide off the family and the community’s hunger for the succeeding months. Sometimes, fathers never came home after an unsuccessful hunt. In essence, for a very long time in our evolutionary history, single parenthood was the rule, not the exception.

But as families and communities started living in environments that were more peaceful and secure, so did the sense of peace and security naturally gravitate towards the nuclear family, the basic social unit. Fathers and mothers started to spend more time together living under one roof, and once children were in the picture, they started taking on a central role in the family’s life. This settled, nuclear phenomenon is a 360-degree sweep from our evolution as individuals, families, and communities. And, so, it makes sense that it’s beset by many, many challenges.

The costs of keeping the nuclear family

For one, parents, inevitably, get unnecessarily exhausted. We hear this time and again, “It takes a village to raise a child,” but a village that consists of only a father and a mother will be vulnerable to even the slightest storms. Reaching breaking points, mundane fights, boredom, infidelity, and violence are just some of the symptoms that spill out in an exhausted household.

Secondly, keeping the nuclear family as the “perfect” family makes a perfect case for keeping the status quo, fueling the need for fathers and mothers to stay within their culturally defined roles. In a survey of greeting cards sold in the US, it was found that greeting cards reflected social expectations of what makes a “great” mom and a “great” dad, which is generally a nurturer for the former and a provider for the latter. And while the messages point out everything that moms do for the home, the messages are rather vague for the dads, with not much substance on what makes them “the best dad in the world.” Globalization as a family ally

While these options sound promising, social norms are slow to adapt to them. Why, say, are changing nappy stations only seen in women’s toilets and not in men’s? Why do parenting books largely speak to mothers, with only a tiny, negligible chapter devoted to fathers?

The adage “It takes a village to raise a child” may have once run against the nuclear family structure, but seeing it differently, it is now more than possible than ever even for single parents to survive and even thrive, thanks to globalization, which has made people more connected than ever. Reflecting on my own reality, I need not hunt, gather, or sew to provide for myself and my child. A few swipes on my smartphone help us eat, drink, wear clothes, and read books. When I need my parents’ help, I’d call or visit them, thanks to internet, electricity, and road infrastructure available at our disposal.

But these benefits of globalization continue to be inaccessible to a lot of people, especially the poor and illiterate, which still makes it difficult for many to get out of cycles of abuse and indebtedness. Instead of options and the power of agency that globalization has provided to many who have access to these tools, many others, out of desperation and lack of alternatives, are left to lean on institutions that thrive on unhealthy and unjust behaviors.

Every time we celebrate Father’s and Mother’s Day, may we take it as an opportunity to reflect on and redefine what being a “father” and “mother” would best mean to us. Being a single mom on Father’s Day may have made my gut wrench for a time, but I have come to accept this as but another variation of a “perfect” family that society has refused to accept for a long time. The same goes for being an unorthodox mother on Mother’s Day, or being an unorthodox father on Father’s Day.

But unlike other jobs that we choose to take, it is not as easy to turn our backs on our children and family commitments. So, I think that recognizing that “becoming a woman” and “becoming a man” takes all forms and sizes is so important when we’re making big decisions, like starting a family. It is going to be the most unjust thing that we could do for ourselves, our partners, and our children if we choose to start a family just because everyone else is progressing towards it or is pressuring us to have one.

My life, my choice: ‘Why I chose not to have children’ It also bears stressing that for us who have access to social, literacy, and economic tools that allow us to benefit from globalization, we, too, have a role to play in opening our doors, as wide as possible, to allow others to also have the same options that we do. There are many ways to do this, and one of the most basic is to start where we are by mentoring people we know so they could get access to better jobs and a better network. It takes active action, as well as state action, to help all families of all forms and sizes to thrive in this increasingly competitive world.

It is not my intention to be self-righteous when I say my husband left our family because I, too, have my faults and I could have been a better spouse. But one thing’s for sure: I don’t hate my husband for leaving us. Just like many other fathers, he might have thought that being a father was the natural next step to “becoming a man,” until he realized he could not be one. Like many fathers, he became a prisoner of our history and evolution as a modern society.

In a paternalistic world, there are many ways to “becoming a man” — and becoming a father is not the only way to get there. – Rappler.com

Raizel Albano is an applied anthropologist, currently working for Euromonitor International and leading a research project under the UNESCO Silk Roads program.