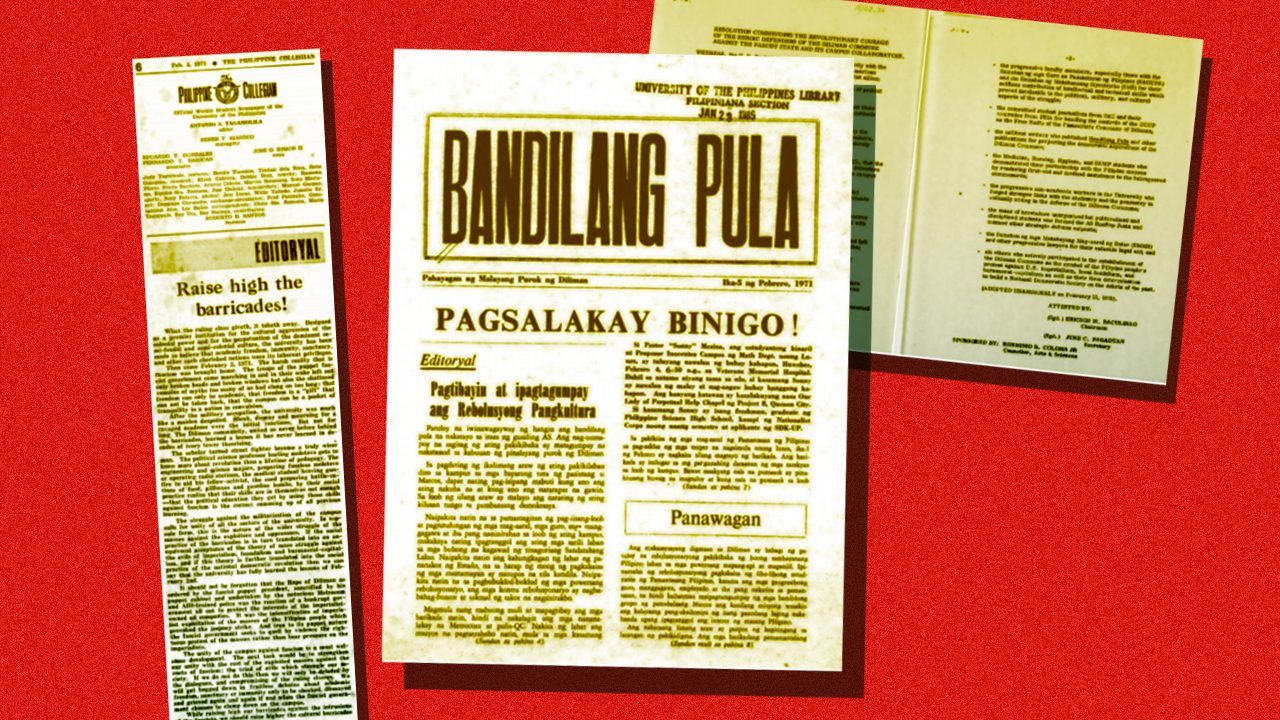 This was the iconic call of a stirring editorial penned by the Philippine Collegian, UP Diliman’s student publication, amid the historic barricades of 1971 that has earned renown as the “Diliman Commune.”

The call forwarded by this February 4, 1971 editorial seems to have acquired renewed urgency amid the Duterte regime’s unilateral abrogation of the UP-DND accord that prohibits police and military presence in UP, a historic reversal of the long struggle for genuine freedom and democracy.

Next month, we will commemorate the 50th anniversary of the Diliman Commune, a historic event that, as the Collegian editorial demonstrates, forcibly opened the question of the relevance of the university in a society mired in ever-widening class divides, social injustice, and structures of oppression.

In facing renewed threats to academic freedom, critical thinking, and solidarity with social struggles, we need to take stock of these lessons from history.

Campus as a ‘liberated zone’

The Commune did not happen in a vacuum. Its explosion was the culmination of a decade of youth unrest in the 1960s in response to the worsening crisis of a neocolonial society, anti-communist witchhunts, and Marcos’ insatiable hunger for power.

This was the general atmosphere when on February 1, 1971, students in various universities in Metro Manila took up the call by radical groups like the Kabataang Makabayan (KM) and Samahang Demokratiko ng Kabataan (SDK) to erect barricades in solidarity with striking jeepney drivers protesting the increase of oil prices.

In UP Diliman, the peaceful barricade became bloody when a Math professor tried to force the barricading students to disperse and shot dead one by the name of Pastor “Sonny” Mesina Jr. This enraged students and resulted in a massive walkout to head to the barricades.

The Metropolitan Command and the Philippine Constabulary tried to forcefully disperse the protesting students using truncheons, shields, and guns. This prompted the students and some faculty to defend themselves; they birthed improvised pillboxes, molotov cocktails, and even kwitis.

On the night of February 2, 1971, police forces raided the Camia and Sampaguita Residence Halls — the designated dormitories for women in the university — after protesters sought refuge in these places.

After 3 days of violent military operations, the Collegian reported that over 60 students and UP community members were injured. Dozens more were arrested.

They declared UP a “liberated area” against the fascist state forces, renaming buildings after revolutionary figures. They occupied the local campus radio DZUP and the UP Press to broadcast and publish the demands of the Commune.

Students also formed a “provisional directorate,” a student-led ad hoc body tasked with coordinating the defense and governance of the campus.

They named the entire event the “Diliman Commune” in reference to the 1871 uprising of Parisian workers. It was the 100th anniversary of the Paris Commune.

[PODCAST] KRIMINAL: Why Filipinos should care about the UP-DND accord The Commune may seem like the handiwork of a bunch of idealistic students at first glance; but this would not have lasted that long without being a multisectoral effort. An outpouring of support from the different sectors inside and outside the university strengthened the Commune.

Residents from Barangay Krus na Ligas, Old Balara, and other nearby communities provided food supplies; some faculty members and administrators manned the barricades and provided logistical support; senators like Ninoy Aquino showed up for a dialogue with the UP community; students from other schools also manned the barricades.

This support was memorialized in a February 13, 1971 UP Student Council resolution sponsored by Sonny Coloma, who was then a moderate student leader.

The reason for this massive support had to do with the students carrying the aspirations of the masses. They brought to the limelight not only their demands as students, but also the demands of the working classes such as jeepney drivers. The university was used as a political space and a platform to explain the impact of oil price hikes to the general public. The students asserted the importance of academic freedom and exposed the fascist character of the Marcos government. More importantly, they showcased how even a dictator can be bested by collective action and broad solidarity.

This exercised the true meaning of being an iskolar ng bayan – learning from the masses and amplifying the voice of the marginalized. The establishment of the Commune broke the narrow concept of “student power” – which feeds the idea that students, by themselves, can make change. The students understood that they will only realize their true power if they link themselves with the masses. Because of their militancy and unity, they were able to prevent, albeit temporarily, the police takeover of the university, and the arrest of fellow students.

Anti-communist scholars and state propagandists have painted a picture of the Commune as a premeditated plan by conspirators to foment anarchy and destabilize the Marcos regime in favor of their liberal political allies. But a careful piecing together of archival material, media reports, eye-witness accounts, and narratives by surviving participants would show that the Diliman Commune was a spontaneous outburst amid repression. Despite being constantly overtaken by the fast turn of events, organized forces led by the KM and SDK tried to give direction to its movement by organizing student resistance and raising political consciousness.

Aware that the Commune cannot be sustained forever amid threats from the state, the barricades were eventually voluntarily torn down – but not before raising the political militancy of an entire generation of youth who would later go on to lead the resistance to the Marcos dictatorship.

More than the concrete gains like fortifying the university’s position against military presence in the campus, it was the Diliman Commune’s value as a symbol of collective resistance to a budding dictator that constitutes its greatest victory.

In the following years after the Commune, there have been continued threats of police and military interventions especially during Martial Law.

But even during one of the darkest times in our history, state repression was not able to quell the flames of resistance. Students continued to protest and slowly rebuilt their collective strength, despite militarization of campuses and the prohibition of political organizations and activities. This heightened towards the building of a broad student “democratization movement” that fought for the re-establishment of student councils and campus publications and contesting school fee hikes and unfair school policies.

One concrete product of the democratization movement was the Enrile-Soto accord in 1982, which paved the way for the crafting of the UP-DND accord in 1989 and also the PUP-DND accord. These agreements were the result of the relentless fight for academic freedom. Students literally sacrificed their lives for these concrete gains.

But of course, history is a constant struggle between the oppressed and their oppressors. While democratic spaces are being won over, it is always under constant threat of being taken away.

We are facing the worst political, economic, and health crises in history. Instead of solving these problems, the government is hell-bent on silencing the people, especially the youth. The Duterte regime seeks to remove whatever remaining democratic spaces to preserve its unbridled rule. Duterte and his generals want to transform campuses into military outposts and render the youth docile amid burning issues like the accessibility of COVID-19 vaccines, the P15 billion stolen by PhilHealth, charter change, and of course, the upcoming presidential elections.

This act of desperation by the Duterte regime only shows that, like Marcos, he is afraid of the militant youth. For no dictator can withstand the youth that has learned to link arms with the toiling masses. After 50 years, the lessons of the Diliman Commune still ring true. We ought to commemorate it with revolutionary exuberance, and more importantly, to uphold its legacy of militantly defending academic freedom and serving the people. – Rappler.com

Karlo Mongaya is a faculty member of the Departamento ng Filipino at Panitikan ng Pilipinas, University of the Philippines Diliman.

Orly Putong is a student at the School of Library and Information Studies, University of the Philippines Diliman.

Rochel Bernido is a student at the College of Arts and Letters, University of the Philippines Diliman.

Disclosure: All 3 are members of the research team for the “Barikada 50” commemoration of the 50th anniversary of the Diliman Commune led by the UP Diliman Office for Initiatives in Culture and the Arts. The views in this article, however, are those of the authors only and do not represent the official stand of the office.