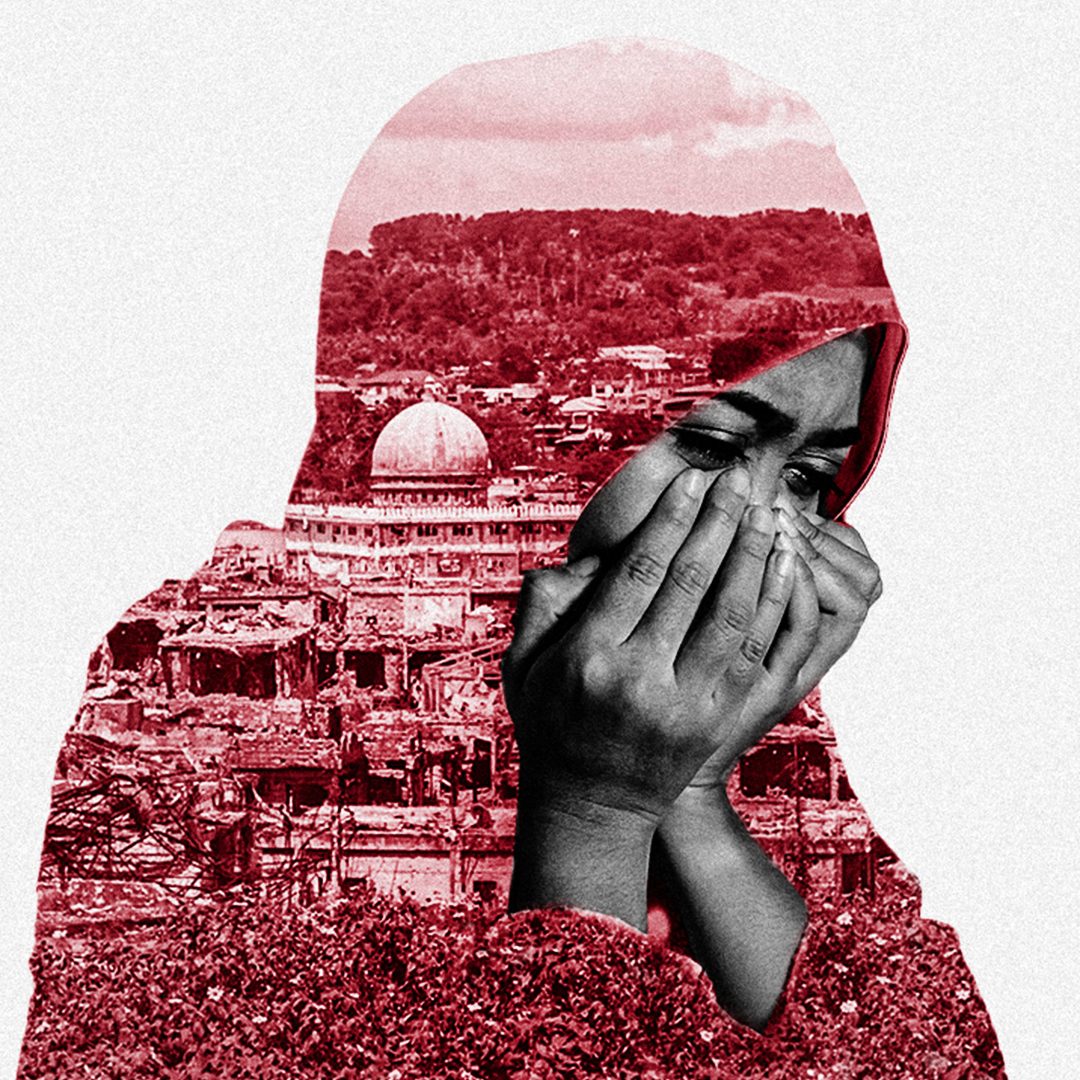 Facebook Twitter Copy URL
Copied
'It seems to me that all narratives now flow from the siege, and what becomes of the future emanates from it'

I was a college sophomore when the shift in the country’s school calendar was implemented. Those extra months of summer vacation brought me to Mindanao, where I helped out in different local organizations across the island, sometimes by writing reports and impact stories. But most of the time I was just tagging along.

In a strange coincidence, an opportunity reunited me with the island early this year. I would frequent Marawi City, the stage of the brutal urban warfare of 2017.

In one of the few entry points from the city proper to what is referred to as ground zero stands the Mapandi bridge, the site of one of the most internecine combats during the early days of the siege. Across the bridge, on the second floor of a two-storey edifice, a balcony hangs loosely, and in its place are stacks of sandbags and an unhinged door. This gate to ground zero is a glimpse of what’s inside – the living testimonies of the hard-fought battle between the military and the insurgents.

I have always been vexed by the use of the term ground zero. Perhaps it is because what remains on the ground is zero, except for the scattered debris, the weeds growing on the walls of deserted buildings, and the fragments of memories of what locals once called home. The plight of the bakwit

Bakwit is the colloquial term used in Mindanao to refer to internally displaced people. There are lots of them in and around the city, and they long to come back to their home.

Approximately 70,000 people continue to live in temporary shelters that were not built for permanent settlement, and another 50,000 are estimated to be living in family members’ houses. Many have bewailed the difficult living conditions in shelters, such as the full-to-the-brim septic tanks, the sparse water supply, and the severe lack of job and income opportunities.

There are numerous projects that have been implemented in Marawi to ease the hardships of the residents, whom I had the privilege of speaking to as part of an evaluation of a project on building resiliency from disasters. What I found particularly striking was how people would come back to stories of the siege, a man-made disaster, while talking about floods, a natural disaster. It seems to me that all narratives now flow from the siege, and what becomes of the future emanates from it. The siege is etched into the collective memories of locals like indelible pockmarks from bullets on ground zero’s remaining walls.

‘Marawi Siege: Stories from the Front Lines’ – Chapter 1, The Raid

Before Ramadhan started this year, there have been fears of another siege. Some have sworn that they’ve seen drones flying over the city. Others have become anxious when communication lines are interrupted.

It was four days before Ramadhan when the firefight broke out in 2017. I have often wondered if the way in which the siege looms large in the locals’ psyche is an indication of the need for more psychosocial intervention.

Traumatic was how many Meranaws – people belonging to the Maranao ethnolinguistic group that largely comprise the city’s population – describe it. One of our local staff lost their father during the siege because they could not find a spare oxygen tank which was necessary for his pneumonia treatment. A 24-year old breadwinner I spoke to lost his mother to diabetes because at that time they could not find medication anywhere. He described the harrowing days watching his mother, who raised her eight children by herself after her husband had died, succumb to a disease that could have been medicated had circumstances been better.

The common thread among Meranaws, and perhaps one of the most heartbreaking to hear, is how most of them chose not to evacuate their homes during the early days of the war.

“Akala namin matatapos ng dalawa o tatlong araw lang,” they would say, referring to past conflicts. Conflict was so common, so ordinary, that thinking nothing of it had become second nature to them.

Eight months after the siege, 35-year old Acmad (not his real name) came back to his home in Barangay Pagalamatan and found it empty – the TV that he had worked hard to buy was gone; so was the jewelry that he and his wife had saved up for the “rainy days;” not even the worn-out clothes and old kitchenware, which they chose to abandon because there were only few valuables they could bring while fleeing the city, were spared. It could not have been the doings of the insurgents, who he imagined were busy fighting for their lives.

In another story recalled by a witness, an old woman was pleading for her old television back, which she found at the back of a military truck. “Amin yun e,” she’d said. She was sure because it had a distinctive sticker plastered on the bottom.

Acmad was lucky to have been allowed to go back to his home, but for thousands of residents of what were once 27 barangays in ground zero, it has not been as easy. Roads are slowly opening up for vehicles, but locals are still not allowed back.

The sight of the rubble and torn-down buildings gives a palpable sense that not much progress has been made by way of rehabilitation. There seems to be a wide chasm between the official rhetoric on the city’s recovery and reality. The Maranao way of life

In Iligan there is a joke that goes, if you see a flashy car, chances are a Meranaw must own it. And like most stereotypes, this depiction of Maranao pride is grossly misplaced. Maratabat has nothing to do with ostentatious displays of material possession.

Maratabat is the ethos of pride and honor which has guided the Meranaw through trials, tribulations, and triumphs. It summons them to rely on one’s own, but to be of help to others in times of need. It exhorts them to fight back when one’s honor is trampled upon.

Meranaw scholars have warned of the misattribution of maratabat to conflict, especially when this cultural value is used to perpetuate the reductive propaganda that paints Meranaws and the larger Muslim population as the cause of violent extremism. In truth, peace is intricately woven into the Maranao cultural fabric.

Feminist writer Rita Mae Brown famously wrote, “Language is the roadmap of a culture,” and Meranaw language points in the direction of amicable interrelationships through its many concepts of peace-building – phangangakolan (to mediate between two parties in conflict), phangingimasadan (a mediator between two parties in conflict), pasaden (the two parties agreeing to a truce), kapasadan (an event when two conflicting parties have agreed to truce). I have only been working in the area for almost four months but I’m confident that these are just tiny slivers of the Meranaw peace-building lexicon.

At the height of the siege, when the ferocious battle had emptied the city of its residents, Meranaws flocked to neighboring cities and municipalities. Iligan locals recall Meranaws sleeping outside malls and practically every other corner of the city. To have endured such aggressive violence must have been incredibly painstaking for a proud and peace-loving group of people.

Nearly 4 years later, only 4 of 470 bodies buried in Marawi identified Every time I  get a chance to pass through the heavily guarded ground zero, I try to be more mindful of the world outside our small pickup truck. The military prohibits taking photos, so making mental notes of the landscape is the next best thing. On one of those trips, I passed by a wall that could have once been a small building. On it was graffiti that read, “MAUTE.” Underneath the bold letters, a small and unassuming text in parenthesis read, “Marcos/Duterte.” It was discombobulating trying to decipher what message this wished to convey.

But perhaps, in a perverse way, it captures the sort of ambiguity people feel as to who is responsible for what has become of Marawi. – Rappler.com

Sasha Dalabajan works as a media and communications officer for a local nonprofit organization. She is currently based in Iligan City. The opinions she expressed in this article are solely hers and do not necessarily represent the views of her organization.