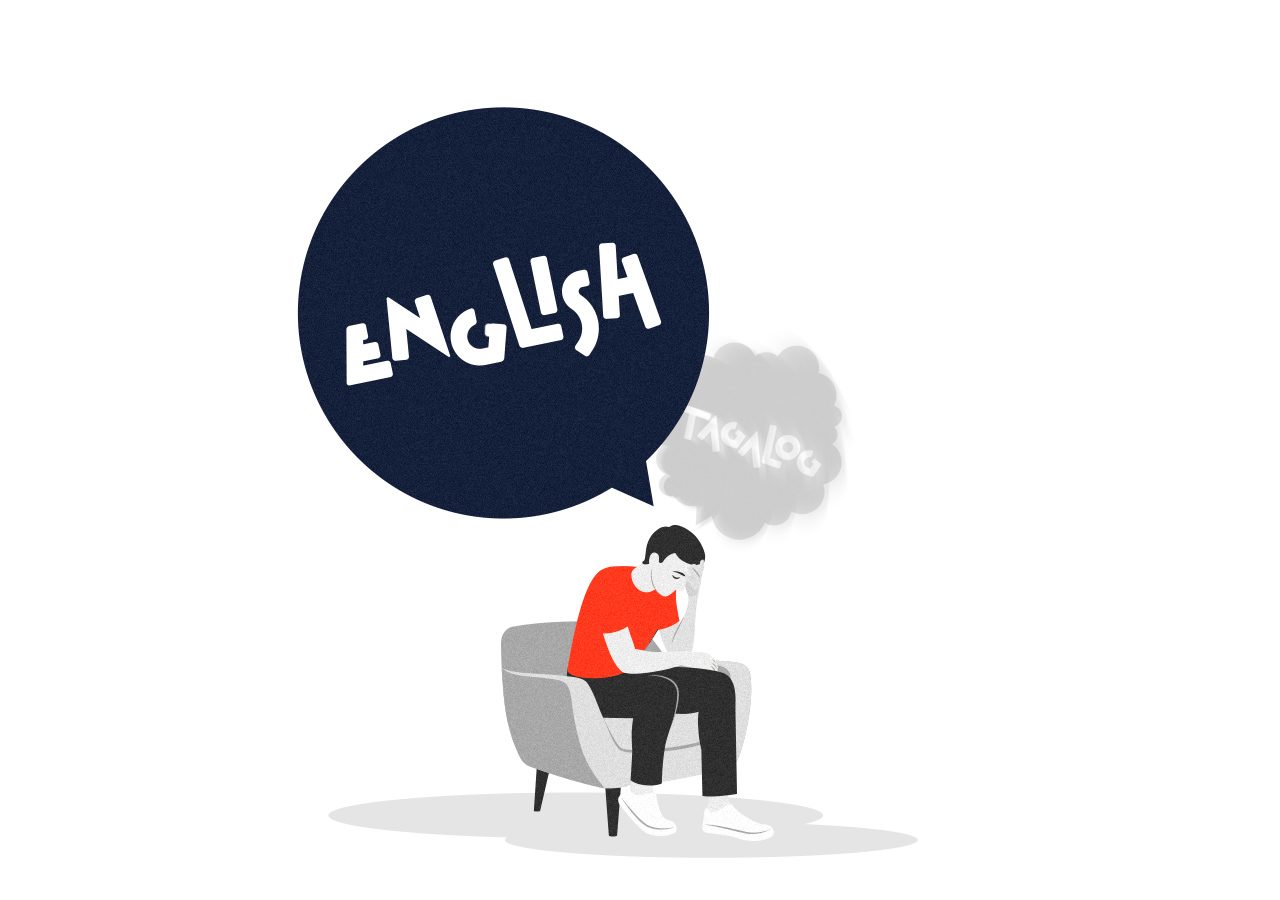 Facebook Twitter Copy URL
Copied
'Why is it that my tongue feels heavier when I have to speak in my own language?'

We Filipinos speak many languages. We have our local languages, those tied to our geography and where we come from. And then there are the national languages, Filipino and English, which we are required to speak, languages that were taught to us without us ever knowing why. If you’re lucky, you still speak the language of your home and your ancestors — the native, mother tongue. If you’re like me, however, some languages were buried so that I could only favor one.

How did this burial come about, in my case? You can say it came from my miseducation, to borrow Renato Constantino’s meaning of the word.

It was my father’s well-paying job that afforded the private basic education my sisters and I received, which was a well-meaning decision our parents took for all it was worth.

Our mother in particular was resolute about it. As her children, we understood why. Her moralizing had always come from a very personal place: unlike us, she did not have the privilege we were afforded. She knew a different life. It was through grit, unrelenting determination, and help from her most compassionate relatives that she finished her undergraduate degree before leaving her hometown in Dipolog City.

It was her upbringing, the one she left behind, which often determined the direction of ours. It was also her observations of the local well-to-do kids of her neighborhood that inspired this desire to get her children into a private school. She absorbed what was impressive about them, which was their command of the English language. And so, apart from wanting a “focused learning environment,” she wanted her children to be good at English, too.

Our six years of basic education were eventful. It was filled with innumerable hours spent memorizing words and their spellings. We read short stories aloud to practice our diction. We dissected sentences to learn grammar rules and extracted main ideas from paragraphs, squeezing into our brains as many idioms and figures of speech as we could. Our school even had this dreaded annual public speaking competition that all students were required to join. We had to memorize oratorical pieces and perform them onstage in front of every nervous student awaiting their turn.

Worse, we were apprehended for speaking Tagalog within the school’s walls. Every word uttered in my mother tongue, except when spoken during Filipino classes, took a peso and a bit of my dignity from me.

My education in the English language was one of due diligence and strict implementation. In the end, I developed sensibilities that urged me to pursue it even further, this time of my choosing. I picked up books in English. I became more receptive to English media (given its abundance). I also became more expressive in my everyday communication in English. Soon enough, I began to think in English, oblivious to what I was losing when I found comfort in the language.

Focusing on this foreign tongue made me neglect my mother tongue. My ineptitude with Filipino haunts me up to now. When I find myself in a position where I have to express myself in Filipino, my mouth runs dry. I struggled in my Filipino classes. I seldom survive when I have to speak in full sentences, let alone paragraphs. It takes a while, much to my embarrassment, to figure out numbers in Filipino. Why is it that my tongue feels heavier when I have to speak in my own language? It’s almost as if I could never speak how I feel and think in my mother tongue. The words feel too heavy and alien. Sometimes I can’t think of them at all.

There is a feeling of shame attached to this experience of language. Even if I have since learned that this has its roots in America colonizing not only our resources and institutions but also our minds, our sensibilities, and our very being through language, using English — choosing it — often feels like a betrayal.

I know I have yet to overcome this, and I do try. But despite these efforts, it feels like it’s too late for me. Something, a linguistic umbilical cord perhaps, was severed when all that seemed important was for me to speak in a foreign tongue, never mind that I was not able to cultivate my own.

Because of this, I can’t deny that, in thinking about language, I think of the tongues I could have spoken with the same ease: the intelligent Tagalog of my home, the robust Cebuano of my father, the boisterous Bisaya of my mother’s home in Mindanao. But in thinking about language, I think of my mother most especially — about the language she has always spoken in, not once having forgotten its sounds and meanings, a language she always carries with her wherever she goes.

All of them are in some ways the mother tongues of my heritage, the languages that I feel would make me a better Filipino had I just known and spoken them, and thereby lived in them. Nothing makes me feel surer that language is alive, for how can it not be when it is something that can be taken from you, buried to favor another, and slowly forgotten? – Rappler.com

Jecko Sanjorjo, 21, is a senior BA Communication Arts student at the University of the Philippines Los Baños.