I was denied a U.S. visa, and it’s very personal 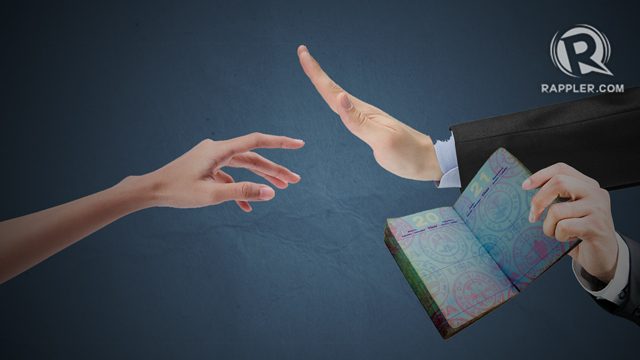 Facebook Twitter Copy URL
Copied
The embassy officer told me I could reapply if and when my 'circumstances change.' What circumstance has to change before we beat colonial presumptions and call ourselves worthy to travel this world freely?

It’s strange. I was born to be an immigrant. My family did everything in their power to make sure I wouldn’t grow up in the Philippines.

My mother was successful at that. She immigrated to the United Kingdom and, a few years later, her children were given visas to stay indefinitely. I had what a lot of parents wanted for their children.

She and my sister eventually became British citizens, as I held on to my very powerless Philippine passport.

I’d like to call myself a failed immigrant. I spent a year in high school in the UK in 2002, and 6 months pursuing a Masters degree in 2016. Both times I cut life plans short for one simple reason: I just love the Philippines so much more.

So it’s strange to be given a blue slip at the United States embassy, declaring me unqualified to be a non-immigrant. I cannot be a non-immigrant? But being a non-immigrant is what I’m good at, to the disappointment of an entire clan, which just doesn’t understand why I’m choosing to stay here.

I’ve written many personal stories about migration. This is a sad culmination of sorts, and I’ll tell you why.

READ:
Finding Eudocia Pulido in her hometown in Tarlac
Eudocia Pulido had hopes, dreams, and fears too
Part 1: An undocumented OFW’s most awaited Christmas
Part 2: An OFW’s special London Christmas with her daughter

My mother is finally retiring after decades of working as a carer in the UK. So this fall, she wanted to go to the US with my sister and me. It will be our first time as a family to travel abroad outside the UK.

I’m a proud daughter of the quintissential OFW. The daughter of a college graduate who became a maid because it was what was available abroad for many Filipinos.

But all my life I’ve been trying to escape that narrative, and I’ve tried to do everything right: I finished my studies here, got good jobs here, and committed that everything I will do, I shall do for my country. And that includes making a good representation when I travel overseas.

Traveling and migration have become very personal to me. Everywhere I go, I try to have conversations with OFWs to get to know their stories, what brought them there, and if they would ever come back to the Philippines.

So when I went to my interview at the US embassy in Manila to apply for a non-immigrant visa Friday morning, April 13, I tried to chat with people in my line. (READ: US tourist visa application guide: Tips and reminders)

They varied from wealthy businessmen to modest Filipinos who just want to see the Land of the Free. If they had a different agenda, I didn’t probe.  Besides, they were going to face probing by the consular officer. They didn’t need quizzing from me.

The one in front of me said she had no prior travel abroad, and was going to visit her husband in the US. She was denied.

The main rule of visa applications is: you are presumed to have an immigrant intent until the officer decides otherwise.

My immigrant intent, I feel, can be debunked in 5 words: I have always come back.

It’s important to say that I do not denounce those who resort to undocumented stay – unfair laws leave them few choices. I was just luckier. So I felt my UK indefinite visa was my golden ticket.

Soon as I mentioned it, the officer looked up from his computer and said, “That’s interesting.”

Then he asked a question that every single person I meet would usually ask me: Why are you not in the UK then?

I answered the way I’d always answered, with the truth: I just really love this country.

Trying to escape the narrative of migrating for greener pastures is both personal and political.

Personal because I want to show my family that there is more to quality of life than economics. There is staying together. There is growing up together long enough to really know each other.

Political because I want to show young people that there is value in staying here, that dreams come true here. I want to show other countries that Filipinos are worth so much more than accusations of stealing someone else’s job.

So my visa interview was not just about me wanting to see Times Square or Central Park. It wasn’t just about spending quality time with the family I don’t live with. It was about my solid chance to escape the narrative. To start rewriting my story, finally.

I can swear I was ready for the interview, as if I had been preparing all my life for that moment. The officer, without looking at any document, asked me 4 questions:

He signed the blue slip and told me I was unqualified for a non-immigrant visa. As with all officers, he didn’t explain why.

In less than 5 minutes, he denied not my visa but my bid to have a different story.

My friends speculated that it was because I appeared to have no social ties here, and it didn’t help that I was only a year or so into my new work. But it’s 2018 – families live apart, Filipino families live apart. And you can get a new job.

But those things didn’t matter because it was about perception. It was about the minute details of your life that should prove: No, sir, I will not stay in your country illegally, it’s not gonna be that story.

The officer told me I could reapply if and when “my circumstances change.”

What circumstance has to change, individual or national, before we beat colonial presumptions and call ourselves worthy to travel this world freely?

How much harder do we have to work to earn the right to a different story? – Rappler.com