If social media during President Duterte’s first year was defined by hateful rhetoric online, the second year will be remembered for its cringe-worthy display of incompetence.

Six months ago, we documented a series of slip-ups by agencies and officials of the current administration, who appeared to struggle with a rather steep learning curve when it came to navigating communications on social media.

These days, it seems like social media gaffes and sloppy work have become the distracting norm that can no longer be excused as growing pains for an administration that is about to start its third year in power. In the month of June alone, the presidential agency mandated to communicate government policies and information to the public has referred to Norway as “Norwegia”, the late National Security Adviser Roilo Golez as “Rogelio”, and Senator Sherwin Gatchalian as “Winston”.

Presidential Communications Operations Office (PCOO) Undersecretary Lorraine Badoy has responded to the criticism by defending it as a mere typo and by bringing up the issue of the PCOO’s budget. (The budget for this year is 4.4% higher than 2017 at P1.38 billion). 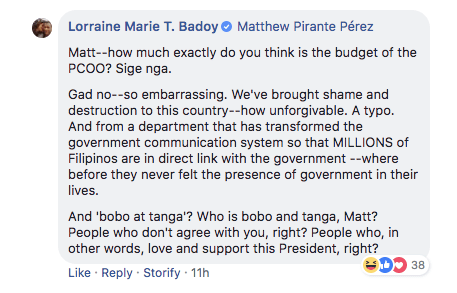 But what did we expect from the agency headed by people known for spreading vitriol and disinformation on social media?

Last year, we were taken aback by the government’s decision to reward Duterte’s most vocal supporters – but not necessarily most responsible – with government positions. Since then, they have become both meme-worthy (Remember Mayon volcano in Naga?) to a source of frustration among taxpayers.

The statement seems a disservice to public servants, especially what Rappler Thought Leader Sylvia described as “gems in government.”

The Code of Conduct and Ethical Standards for Public Officials and Employees also explicitly requires professionalism: “Public officials and employees shall perform and discharge their duties with the highest degree of excellence, professionalism, intelligence and skill. They shall enter public service with utmost devotion and dedication to duty. They shall endeavor to discourage wrong perceptions of their roles as dispensers or peddlers of undue patronage.”

Not a victimless crime

While the memes that result from these can be hilarious, the administration’s ineptitude on social media is not entirely a victimless crime.

In April, the government’s propensity for carelessness online has resulted in serious consequences after a rescue operation in Kuwait was posted by a former consultant of the Department of Foreign Affairs and went viral.

As a result, the Philippine ambassador was summoned then expelled, protest notes were served, and diplomats faced warrants of arrest. (READ: OFW rescue video that angered Kuwait came from DFA) Of course, majority of these gaffes are minor in scale compared to other more compelling concerns that we currently face as we head into another year of the Duterte presidency.

Some might even say that these are intended to distract the public from real issues such as the health of our democratic institutions, human rights violations, sovereignty, and corruption.

While it’s true that these incidents momentarily divert people’s attention, they are still worth calling out because they are symptoms of a much bigger problem that’s persistent in the other aspects of Duterte’s presidency: a culture of incompetence, fueled by hate and excuses, and the cults of personality that propagate them.

In the end, these incidents are proof of talking big and doing little – a behavior that has no place in government. – Rappler.com

Gaffes and blunders from Year 2 alone: