How a Duterte supporter fell out of love with the President

Jun 30, 2018 9:30 AM PHT
Pia Ranada
Facebook Twitter Copy URL
Copied
'The hardest part is admitting that the man you thought he was is different from the man he is,' says a Duterte supporter who has decided to become a critic 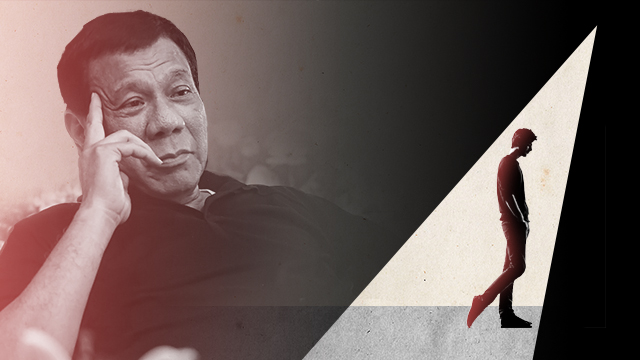 The sari-sari store Joseph* was buying from happened to have a small television flashing a clip of President Rodrigo Duterte calling God stupid. Something about the presidential outburst gnawed at Joseph’s brain until he got home.

While doing some chores, he remembered another thing that had been bugging him for some time yet remained unacknowledged.

Only months ago, Joseph could watch 4 hours straight of Duterte’s speeches for enjoyment. He called it “treasure hunting,” waiting for those rare tidbits of presidential words that were positive and uplifting, that erased “all the trash” in the speech.

“I took pride that I could listen to him for that long. Then I realized, I could no longer bear to watch it, even for just one minute,” Joseph told me.

“Maybe that’s how much I’ve changed.”

When that thought struck him, another one quickly followed.

“’Tangina, critic na ako. Hindi ko na gusto ang ginagawa niya (Son of a bitch, I’m a critic. I no longer like what he’s doing),” Joseph thought to himself.

It was a flash of understanding that came with terrible realizations and a painful coming-to-terms. Joseph did not just vote for Duterte. He was active in his 2016 presidential campaign, volunteering with the campaign’s local chapters in his hometown.

He wrote effusive Facebook posts about Duterte and even managed to convince many in his community to vote for his candidate. Before Duterte even declared his presidential bid, Joseph was among those voices online urging him to run, believing only the tough-talking Davao City mayor could bring drastic, but positive, change.

“The hardest part is admitting that the man you thought he was is different from  the man he is,” said Joseph.

Like many supporters, Joseph “fell in love” with the image of Duterte the Mayor. His outrageous statements, even his threats to kill, seemed insignificant then, a sideshow that added to Duterte’s mystique. Media never made a big deal out of it then because he was just a mayor.

But what was certain to Joseph was Davao City’s economic growth, its many awards, and what seemed like an enviable peace and order situation.

For this man’s sake, Joseph invested time, effort, and all of his youthful passion to helping Duterte win in his hometown.

In hindsight, Joseph says the “God is stupid” remark was just the tipping point, the culmination of a gradual process of disillusionment.

Joseph found himself making too many concessions for the Chief Executive’s sake. He realized how nonsensical it was for families and friends to endure painful rifts, all for a politician they’ve never even met.

Then he noticed Duterte was backtracking on certain promises.

“Nagpromise siya na magbebehave siya. Sa akin, very good ‘yun eh (He promised to behave. To me, that was very good)…For the life of me, I can’t accept him as a President, the way he behaves,” said Joseph. (READ: Two years of Duterte: Broken and fulfilled promises)

Duterte also promised not to play the blame game. Hours after election results confirmed he had won the presidency, Duterte said he would begin the “healing,” the setting aside of politics for the loftier goal of nation-building.

“Turns out, the blame game started happening after the economy came into shambles….I’m the type of supporter who remembers what you say,” said Joseph.

He didn’t like how Duterte and his Cabinet members would contradict each other. Ice Seguerra’s resignation as National Youth Commission chairperson, in particular,  was a “red flag” that “struck a nerve,” said Joseph.

It didn’t sit well with him that Malacañang and other supporters kept using Duterte’s actions as excuses for his unbecoming words.

“Actions are louder than words but I think words still matter. Words reveal his thoughts, his intentions,” said Joseph.

And what does he think of Presidential Communications Assistant Secretary Mocha Uson, Duterte’s most vocal online supporter?

“I hate Mocha. I never liked her, her arrogance to call other people bobo (stupid),” said Joseph.

He appreciated where Uson was coming from, being the daughter of a judge shot dead by hitmen, but Joseph did not like how she “tried to be a journalist” and how she turned her blog into a “political tool.”

This growing discomfort with Duterte turned Joseph into a “silent” supporter. He stopped writing long Facebook posts. He grew tired of commenting on “anti” posts. He downgraded himself to being a mere “meme lord,” or someone who shares pro-Duterte memes.

For months, things stayed this way until he came by the news clip of Duterte’s rant about God and the creation story.

Having poured so much of himself into supporting Duterte, he spoke with passion about why he thought, back on May 9, 2016, that Duterte was the best choice at the time.

“I was willing to cut my finger so I can save the hand. Mali ba ‘yun (Is that wrong)? I don’t expect a president to be perfect….At the end of the day, everyone who voted made certain concessions,” he said, citing shortcomings of the other candidates that their voters also decided they could live with.

Joseph can’t help but see the elections as a gamble he lost. He wonders if, in an alternate reality where Duterte proved to be a good president, would those who oppose him also swallow their pride and admit they were wrong?

With bitterness, he said he should have second-guessed Duterte more. But his pride kept getting in the way.

He’s frustrated with Duterte’s promises, which he said, are mere “blurts” and not real commitments to pursue planned courses of action.

Rather than subjecting Duterte’s speeches to interpretation, Joseph said: “He’s not a literary project. I have to take his words as they are.”

After more reflection, Joseph has decided to shed the label of “Duterte supporter” and be a “critic.”

This doesn’t mean he’s thrown his lot with another political party or that he’s “anti-Duterte.”

“I am no longer a supporter. I’m issue-based. I will support good policies,” he said.

He approves of the newly-signed National Mental Health Act. He doesn’t want Bongbong Marcos back in power. He doesn’t “get” why Duterte is “against” human rights. He doesn’t agree with letting China get away with aggressive behavior in the West Philippine Sea.

Joseph may no longer be a supporter, but he’s still for death penalty and he wants the campaign against illegal drugs to continue, but with reforms.

Seeing himself as a critic has given him room to define himself according to his values, and not those of Duterte or of supporters who call themselves “diehard.”

“I feel at peace with my decision. It’s easier for me to breathe in social media. Some relationships are being mended. There’s a healing process,” said Joseph.

The greatest danger, he realized, is allowing yourself to get boxed into labels like “pro-Duterte” or “anti-Duterte” because you would be making everything about Duterte and his persona.

“Do not restrict yourself from changing opinions just because people think you’re DDS or dilawan,” he said.

Above all, Joseph called for understanding, for people to work harder to find a common ground, rather than fight over differences. For him, there are blinders on both the supporters and critics.

The freedom comes from making up his own mind, and not being forced to rationalize Duterte’s actions or statements to fit any pre-determined conclusion.

At the end of our talk, Joseph declared, “My future opinions will be shaped by future events.”

Not by a narrative, not by a label, not by any one personality. – Rappler.com

*Not his real name. The interviewee requested for anonymity.