May 14, 2019 7:44 AM PHT
Raisa Serafica
Facebook Twitter Copy URL
Copied
Filipino voters are not 'bobo'. They are coming from a legitimate, deeply-rooted desire to see things change. 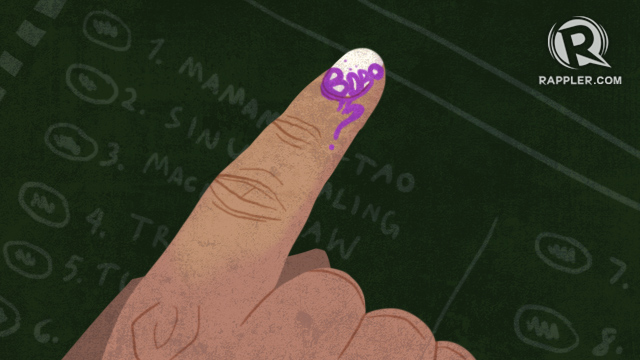 And my first thought was: Can we not?

A quick review of the leading candidates from the first wave of transmission from the Comelec servers – translating to only 0.38% percent of total transmissions – showed individuals accused of plunder or dishonesty, former celebrities, or candidates with no clear platform. In the second update, which arrived 7 hours after, the names hardly changed.

Because of this, people have been quick to judge that the voters who supported these candidates do not know any better.

But that, unfortunately, is a simplistic way of analyzing the partial, unofficial results. One person voting for candidates whom the other opposes do not make one right and the other wrong. That’s not how democracy works.

This has been said many times by political pundits, professors, and analysts but I guess it bears repeating: What we see during elections do not happen overnight.

What we see during elections is an accumulation of the collective resentment, frustration, and even anger of many Filipinos from past years or even decades. They are a result of the government – or the once-prevailing members of the government – neglecting the needs of the people for as long as they can remember.

My husband explained it better: “I believe at the core of our political disagreement is not a ‘stupid’, ‘gullible’ masa. It is the birth of an antithesis formed by a class that was hurt by years of decent but elitist policy. Choosing the actor over the statesman, to many, is like poking the eye of the rich.”

The presidential elections in 2016 revealed this reality when Filipino voters were provided an alternative choice for a national leader. Having tried and voted for the usual candidates who have unfortunately failed them, who could blame voters for considering somebody else?

And so that year, Filipinos leaned towards the seemingly unlikely candidate, electing the former mayor of Davao City Rodrigo Duterte whose platform anchored on the resonant promise of change. This year, it looks like voters are following through after their 2016 decision by going mostly with President’s endorsed candidates. (READ: Comelec: Slow unofficial count due to ‘technical issue’)

One thing is for sure, however: Filipino voters are not “bobo.” They are coming from a legitimate, deeply-rooted desire to see things change.

If there is one insightful thing I’ve learned from working on civic engagement projects for years, it’s that Filipinos are not voiceless. Given the right platform, they are definitely capable and empowered on their own to express where they stand.

Elections tell us that as much, with Filipinos from all walks of life using their voice through their rightful votes.  And that is the beauty and peril of democracy. (READ: ‘Mauna ang bansa:’ Beyond duty, Filipinos share why their vote matters)

But is there anything to learn from this?

I believe this democratic process tells us a lot about each other and the Filipinos that make up this nation. It teaches about our own diversity and, consequently, challenges us to focus on the things that instead could make us unite. Most importantly, it also reminds us about the struggles of the poor that the privileged have not experienced.  Elections, I think, give people perspective.

Armed with these lessons, I hope, Filipinos collectively move with two things: empathy and purposeful engagement. We need get out of our echo chambers, reach out to each other as much as we need to understand where everyone is coming from. This is to convince ourselves that, despite the political disagreements, many Filipinos aspire for the same thing: to see our country truly develop.

Remember, elections like ours can only either unite or further divide the country. For my love of this nation, I hope it’s the former. – Rappler.com