The problem with our tax system and how it affects us

Jan 21, 2017 3:00 PM PHT
JC Punongbayan
Facebook Twitter Copy URL
Copied
Not only do our taxes disproportionately burden the poor and benefit the rich, but they also yield too little revenue given the distortions they create. Needless to say, both problems need to be resolved soon.

President Duterte’s plan to overhaul our tax system is arguably his most highly-anticipated and consequential policy thus far into his term.

The plan, originally crafted by the Department of Finance, aims for a “simpler, fairer, and more efficient” tax system that will promote investments, create jobs, and reduce poverty. Many sectors have expressed support for it, including a group of former DOF and NEDA secretaries.

But some lawmakers have branded the tax proposal as “heartless” and “anti-poor” because of, say, the planned increase on fuel taxes. Others have also questioned certain spending items in the General Appropriations Act of 2017 that do not merit the additional revenues that tax reform will yield.

1. We have some of the highest income tax rates in the region.

Principle of taxation: High income taxes could discourage firms from producing more goods or employees from working more hours. Hence, a good tax system makes sure that income tax rates are not too high so as to discourage economic activity.

The problem: The Philippine tax system currently has some of the highest income tax rates in this region. Compared to our major ASEAN counterparts, our corporate income tax is the highest at 30%, a rate that “turns off” foreign investors who prefer to do business in our low-tax neighbors. 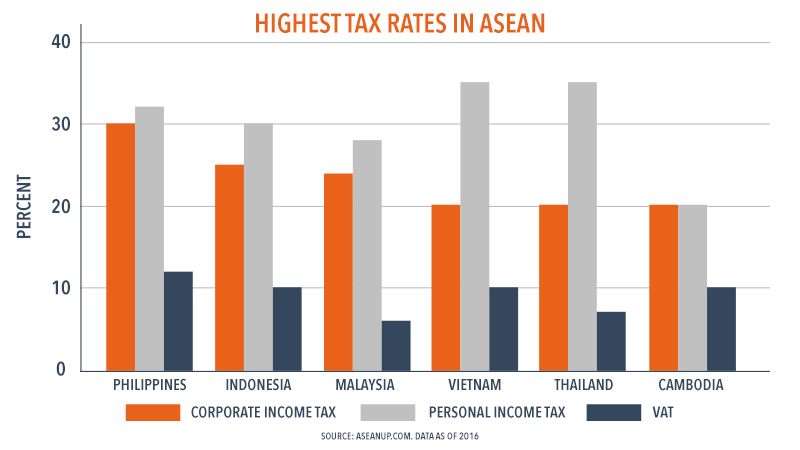 Meanwhile, our maximum personal income tax rate of 32% is not the highest (it’s 35% in Vietnam and Thailand), but we certainly don’t want the government to eat away P32 for every P100 earned by ordinary workers.

2. Too many goods and services are not being taxed.

Principle of taxation: A good way to reduce high tax rates is to expand the tax base, or the set of goods and services which are taxed. The same (or even a larger) tax revenue can be collected as before by imposing a lower tax rate on as many goods and services as possible.

The problem: In the Philippines, too many goods and services are exempted from taxes. For instance, our value-added tax (VAT) law has 59 lines of exemptions – more compared with the VAT laws of our neighbors. The plethora of exemptions partly explains the relatively low tax revenues we get. If only fewer goods were exempted – or if only the exemptions were limited to essential goods like raw food and medicines – then the government could boost its revenues. 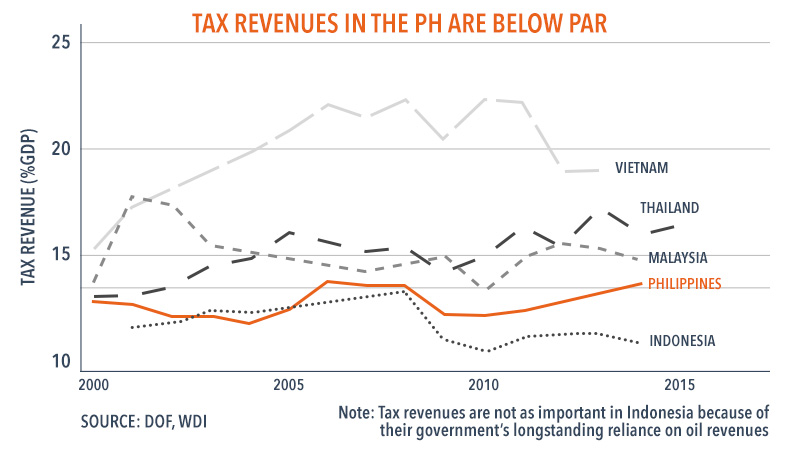 3. Too many people are evading the tax system.

Principle of taxation: Another way to widen the tax base (in order to reduce tax rates) is to tax as many people as possible. But the more people can get away with not paying their taxes (or otherwise hide their income), the more difficult it will be to reduce tax rates.

The problem: Too many Filipinos can get away with not paying taxes. Obviously, there are the tax evaders who are nearly impossible to catch and prosecute given our overly strict bank secrecy law. In addition, “compensation earners” or those who earn salaries or wages, end up paying more in taxes than the self-employed and the professionals (who have some ability to hide part of their incomes). As a result, from 2010 to 2013, compensation earners earned 60% of total incomes in the country but paid as much as 80% of all taxes. 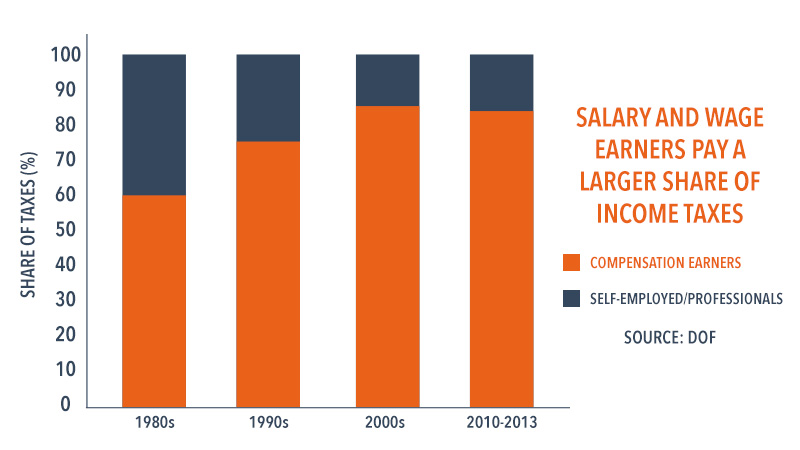 4. Our tax system is too complicated.

Principle of taxation: The rules of the tax system should be as plain and simple as possible. Not only will it be easier for taxpayers to understand their liabilities and to comply, but it will also minimize the administrative costs of collection.

The problem: Our tax system is overly complicated and burdensome, especially for small taxpayers. A 2015 study found that the Philippines ranked 127th out of 189 economies in terms of ease of paying taxes (we ranked below Iraq and Afghanistan). Another study revealed that the “complexity of tax regulations” and our “high tax rates” are some of the most problematic factors for doing business in the country. 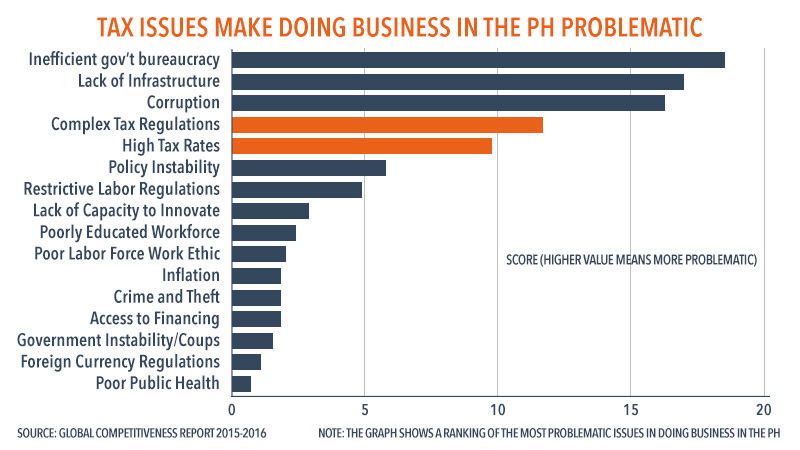 5. Rich Filipinos are not paying their fair share of taxes.

Principle of taxation: Finally, a good tax system levies more taxes to people who can afford to pay more. One way to do this is to make the rich pay for a larger fraction of their income than the poor; that is, by making the tax system “progressive.”

The problem: The Philippine tax system is only “mildly” progressive, and even borderline “regressive” – in many instances, poor Filipinos effectively pay a larger fraction of their income in taxes.

For example, tax rates on dividends and other forms of capital incomes (which are earned mostly by the rich) are so low compared to the tax rates of ordinary workers. Increasing these capital income tax rates will certainly help make the rich pay more in taxes. 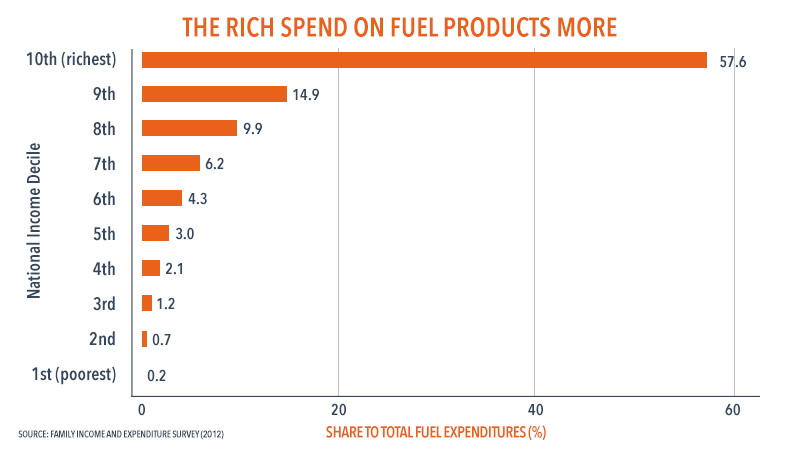 Conclusion: The time is ripe for tax reform

Tax policy is essentially a balancing act between efficiency and equity. We want to impose progressive taxes to make society a fairer place to live in. But at the same time, we want to make sure that such taxes do not reduce economic activity so much.

Unfortunately, the Philippine tax system is currently deficient in both respects. Not only do our taxes disproportionately burden the poor and benefit the rich, but they also yield too little revenue given the distortions they create. Needless to say, both problems need to be resolved soon. Comprehensive tax reform in the country is long overdue. 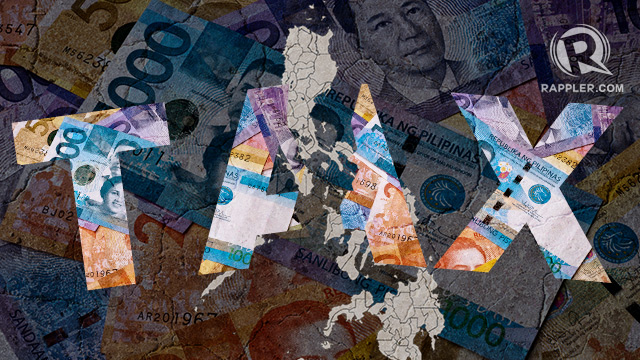 It so happens that the early days of the Duterte administration – when political capital is fresh and popular support is robust – offer a crucial window of opportunity to pursue tax reform. That is why the filing of House Bill 4774, or the proposed “Tax Reform for Acceleration and Inclusion Act,” could not have been timed better.

But while most would agree that the time is ripe for tax reform, there is currently no consensus yet as to how exactly to pursue it. This in itself is a fascinating discussion that deserves another article. – Rappler.com