[ANALYSIS] Why did Philippine growth drop to an 8-year low?

Jan 31, 2020 11:56 AM PHT
JC Punongbayan
Facebook Twitter Copy URL
Copied
Why is there disappointing growth, given the country's potential? Let's talk about lower investments and the weakening of industry. 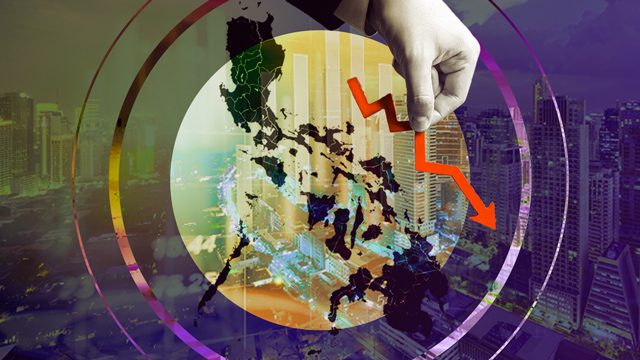 Add this to the long string of bad news that greeted us this January.

Last week the Philippine Statistics Authority (PSA) released its much-awaited report on the size and growth of the Philippine economy in 2019, as measured by gross domestic product or GDP.

This is low for a couple of reasons. Not only did it just miss the government’s growth target of at least 6%, it’s also the lowest growth rate in 8 years (Figure 1). Growth also slid in 2019 for the 3rd consecutive year.

Sure, our economy is still growing, and 5.9% is respectable vis-à-vis the growth of some Asian neighbors. But for a country with so much potential, 5.9% leaves much to be desired.

In this article let’s look at the reasons behind this disappointing growth, and I’d like to highlight the decline of investments from the private sector, as well as the weakening of industry.

The trouble is, we’re not talking about these unsettling developments as much as we need to.

There are two basic ways we can dissect the economy to see what’s wrong with it.

First, we can look at what Filipinos are spending on.

For every P100 of spending last year, P69 was spent by you and me on consumption goods like food and clothing; P29 was spent by private investors on machinery and equipment; and P12 was spent by government on officials’ salaries and infrastructure projects. Take away P10 from total spending, because we imported more than we exported.

Among these components, arguably the most important would be private investments, which fuel future growth: the more we spend on machinery and equipment today, the more growth we can expect tomorrow.

Looking at the data, it’s worrisome to see that private investments failed to prop up growth. In fact, investments somehow dragged down growth (Figure 2). The last time this happened was in 2012 or 7 years prior.

Drilling down further, we see that private investments dropped mostly on account of the poor production of “durable equipment,” which comprise road vehicles, telecommunications equipment, mining and construction machinery, and office machinery.

Construction projects by the private sector did somehow counteract this dip in durable equipment. But even private construction’s contribution to growth fell from the previous year.

The second way to probe GDP is by looking at the respective contributions of the economy’s key sectors: agriculture, industry, and services.

Figure 3 shows that these sectors’ contributions to growth follow the same order of significance.

Some of these trends come as no surprise. In the past decade services have always been strong, and agriculture has always been weak.

What’s surprising is the sudden weakness of industry, whose contribution to growth fell to its lowest level since 2011. This comes after years of robust, sizable industrial growth.

Inspecting industry further, we can see that manufacturing and construction faltered the most. This, at a time when the government is pushing for both a Manufacturing Resurgence Program and an ambitious infrastructure project called Build, Build, Build.

Industry’s newfound weakness is unfortunate. Some economists think industry is still one of the best and fastest ways to grow our economy: for the same amount of inputs, industry still produces more valuable output than services or agriculture.

Other economists, however, contend that services might prove to be a suitable alternative ladder to growth nowadays, albeit less productive. After all, a full resurgence of the country’s industrial sector in the 21st century is arguably unlikely.

A number of international and domestic factors might explain the anemic growth of both private investments and industry.

For starters, one might pin the blame on the ongoing trade war waged by US President Donald Trump against Beijing, a trade war that is seriously disrupting world trade patterns and hampering global growth. Last year the world economy grew by just 2.9% – the slowest since the global financial crisis.

Some studies initially suggested the Philippines might actually benefit from the Trumpian trade war. But we haven’t realized that just yet.

More importantly, the trade war hit hard electronic products like semiconductors, which happen to be the Philippines’ biggest exports and imports. If only we aren’t so tied to electronics – and instead traded a more diverse basket of goods – our manufacturing sector wouldn’t be so vulnerable to the ongoing trade war.

Another possible – perhaps equally important – reason for sluggish Philippine growth is the deterioration of our business climate.

You won’t see this if you looked solely at statistics on business confidence collected by the Bangko Sentral. There you might even see an uptick.

For one, foreign direct investments have declined in recent years, maybe because we’re not as attractive as other investment destinations in ASEAN.

This trend might be exacerbated by a pending tax reform measure (Citira) that intends to rationalize investment incentives such as tax holidays.

President Rodrigo Duterte also recently ramped up his foul attacks on certain corporations. These include Metro Manila’s water concessionaires (which he called “thieves” and whose operations have been arbitrarily cut short by 15 years) and media giant ABS-CBN (whose franchise renewal is in peril this year).

The National Economic and Development Authority, in its official statement on the latest GDP figures, did mention the need to “eliminate policy uncertainties that affect the country’s business climate.”

But I hope they acknowledge that a lot of those policy uncertainties are coming from the President himself.

Beyond the budget delay

Finally, it has become fashionable these days to blame weaker growth on the 2019 budget delay.

Armed with data, we now know this is true – but only to some extent.

Many projects under Build, Build, Build did get derailed – especially in the first half of 2019 – because of the budget delay. But public construction has since picked up, so much so that a fifth of growth in 2019 was due to government spending (Figure 2).

Hence, the 2019 budget delay ceases to be a tenable explanation for anemic growth last year. Instead, one would paint a more accurate picture of the economy by pointing out the disturbing weakness of both private investments and industry.

It remains to be seen if this is the beginning of a trend or a mere blip in the graph. But it’s a concerning development nonetheless, one the economic managers ought to be talking about more. – Rappler.com