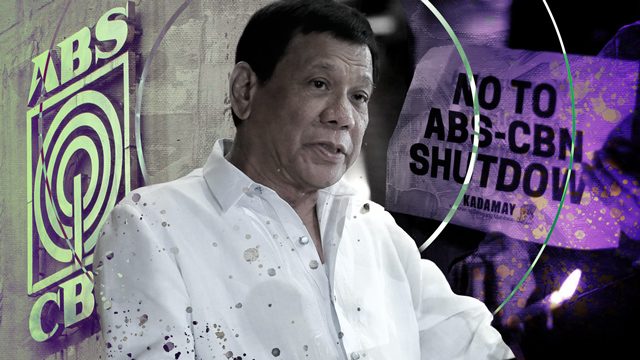 Facebook Twitter Copy URL
Copied
Duterte and company know they have little time in power left. If they want to corner strategic portions of the country’s business landscape, now’s the time to act.

Duterte’s attacks on big business could not come at a worse time.

Meanwhile, the business community was surprised by ports magnate Enrique Razon’s acquisition of majority voting rights in Ayala-owned Manila Water, which distributes water for half of Metro Manila.

Some read this as a cunning strategy to shield Manila Water from Duterte’s recent incessant tirades, since Razon is an “ally” of Duterte.

Amid all this, data show the Philippines’ investment scene is as gloomy as ever. Duterte’s attacks on big business – which reek of double standards and desperation – could only make things worse.

Let’s count the ways by which investments are declining in the Philippines.

This simply means the economy needs more and more machinery, equipment to churn out the same amount of output. (To be fair, this trend started in the previous administration.)

Third, foreign direct investments or FDIs have plummeted (Figure 2). From January to November 2019, FDIs fell by 30% from the same period in 2018. The number of investments approved by the Philippine Economic Zone Authority has dropped as well.

The last thing we need now is for government itself to sabotage the Philippines’ business scene and make it a less attractive place to invest in.

But that’s exactly what we’re getting with Duterte’s attacks on big companies, including ABS-CBN.

In many ways it’s weird for the Duterte administration to pick on ABS-CBN. The narrative they’re pushing simply does not add up.

Recall that ABS-CBN supposedly “swindled” Duterte by failing to air some ads during the 2016 presidential campaign and failing to return P2.8 million.

Even supposing this is true, Duterte has since benefitted a lot from the network.

At one point, the interminable primetime show, Ang Probinsyano, added the war on drugs in its plot and somehow cast an unfavorable light on the police.

They were called out by then-police chief (and now senator) Ronald “Bato” dela Rosa, and the show has pulled punches since. Lead star Coco Martin even publicly patched things up with Bato.

All said, the media giant hasn’t exactly been “critical” of Duterte. But apparently that’s not enough to stay on his good side.

A number of people have speculated that Duterte’s personal vendetta against ABS-CBN is a ruse. In fact, Duterte is paving the way for his cronies to take over ABS-CBN.

After all, it’s not every day that the media giant’s franchise is up for renewal, and the opportunity is too juicy to pass up. (READ: Duterte’s foul attacks on big business: What is he up to?)

In this sense, one might say the attack on ABS-CBN is less about stifling press freedom than promoting selfish business interests.

ABS-CBN’s stock price has been free-falling since Duterte took office in 2016, doubtless affected by Duterte’s relentless haranguing. Recently, such stock price plunged to its lowest level in more than a decade.

In all this, the most disturbing aspect is the blatant harassment by which Duterte is trying to close down ABS-CBN. (There’s also an unmistakable parallel with how the Marcos regime shut down ABS-CBN during Martial Law.)

Second, Calida’s petition is a hodgepodge of weak legal arguments and baseless accusations that, lawyers say, are better tried first in lower courts (rather than elevated directly to the Supreme Court).

Recall that the Securities and Exchange Commission (SEC), at the behest of Duterte, used the very same argument to contest Rappler’s registration back in 2018.

In fact, PDRs are perfectly legal. As explained by Rappler numerous times, “A PDR is a financial instrument that allows foreigners to invest in a Filipino company without owning any part of it or being involved in day-to-day management.”

PDRs are useful in economies such as ours where capital is especially scarce. If the courts ultimately void ABS-CBN’s franchise on the basis of this PDR argument, Philippine companies will find it much more difficult to raise capital and make investments – weak as they are now.

Majority of POGO firms didn’t pay P50 billion worth of taxes last year. Yet the Duterte government is quicker to go after diligent taxpayers like ABS-CBN and Rappler.

What’s more, a Taiwanese worker alleged on Wednesday, February 12, that the POGO industry enjoys the protection of a certain Michael Yang. A person with the same name is a known friend and former “economic adviser” of Duterte.

It’s hard to miss the stench of double standards here.

This is hardly the first time Duterte has tussled with big companies.

But by now more businesses must be realizing they can no longer dismiss the “political noise.” With ABS-CBN’s fate hanging by a thread, and the government resorting to bolder legal measures, things are getting real.

But the attack on ABS-CBN also reeks of desperation. Duterte and company know they have little time in power left. If they want to corner strategic portions of the country’s business landscape, or push their political interests with 2022 fast approaching, now’s the time to act.

The question is, how many more companies will have to endure Duterte’s maneuverings before he’s done? How many of them will resist? And how many more investors will turn their backs on the Philippines, what with a thickening fog of uncertainty hanging in the air?