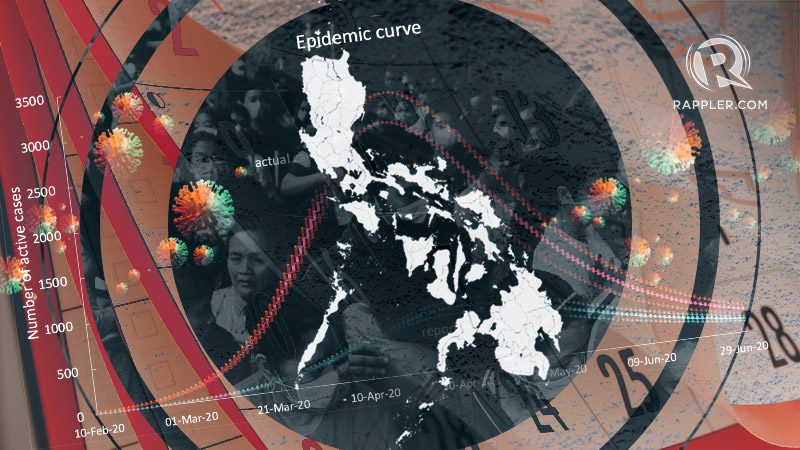 First, the global economy is headed for a recession or sustained economic downturn due to COVID-19. Governments are now drawing up huge stimulus packages to shore up their embattled economies.

Second, the first order of business is to contain COVID-19. Unless the pandemic is quelled, a global economic recovery won’t occur any time soon.

So this week I’m taking the time to look at scientists’ and mathematicians’ outlooks for COVID-19, in the Philippines and abroad, to see where we’re headed.

Two studies suggest the Philippines – which now has sustained community transmission – is only at the very beginning of this public health crisis. (READ: Coronavirus cases in PH could reach 26,000 by end-March)

In fact, the Philippine epidemic might not peak until June and taper off until October (or even longer). This bleak outlook coincides with epidemiologists’ predictions abroad.

Thankfully, we’re not totally helpless. We can still change the course of this contagion – if only we “flatten the curve.”

Exactly how will COVID-19 spread in the Philippines? (WATCH: Rappler Talk: The Exponential Growth of a Pandemic)

Filipino scientists and mathematicians are now crunching the numbers, and there are two studies I’ve seen so far.

The first analysis is by Dr. Jomar Rabajante of the Institute of Mathematical Sciences and Physics at the University of the Philippines (UP) Los Baños.

He predicts that, at least for Metro Manila, the epidemic will peak at around mid-April, when there could be in excess of 2,500 cases in a single day (Figure 1).

When the epidemic is seen to subside by end of June, there will have been a total of 11,000 cases in Metro Manila. Dr. Bandoy’s estimates are grimmer. He predicts the nationwide epidemic will not peak until end of June, when we could see a whopping 245,000 cases in a day (see Figure 2). Worse, the epidemic won’t taper off until October, he said.

In short, the two analysts say we’re in for a roller coaster ride, and we’re just at the beginning.

How do we make sense of these alarming findings?

First, they roughly coincide with the studies abroad.

On March 16, thirty esteemed scientists of the Imperial College at London published a study predicting that an unmitigated epidemic might kill as many as 510,000 people in the UK and 2.2 million people in the US.

Similar to Dr. Bandoy’s findings, the epidemics in the US and the UK will also likely peak around June (Figure 3). The Imperial College study was so shocking it prompted the US and UK governments to enact new sweeping regulations against COVID-19. Even US President Donald Trump, who constantly played down COVID-19 for several weeks, now sounds worried.

Second, the analysts’ findings are only as good as the models and assumptions they used, and these may explain differences in their predictions. More studies will surely crop up in the weeks to come.

Third and most important, by no means are the projections fixed outcomes we’re all doomed to suffer. Filipinos can still abate the epidemic and alter its course – provided we “flatten the curve.”

Mitigation. This is to slow down the epidemic spread, but not extinguish it totally.

Figure 4 shows mitigation can be achieved by a variety of measures, including closing down schools and universities, case detection and isolation, home quarantine, and social distancing among the elderly (who are most vulnerable to COVID-19). Suppression. This involves reversing the growth of the pandemic and bringing down the number of new cases to a bare minimum. This can be enforced by more extreme measures like population-wide social distancing.

The good thing with suppression is that you can make sure hospitals won’t be swamped with new cases of COVID-19, hospital resources won’t be depleted, and frontline health workers won’t be run to the ground.

But suppression comes at a huge social cost. Aside from severe economic downturn, it might also take a huge toll on millions of people’s physical and mental health.

There’s also no let up with suppression: you must enforce it until a vaccine is found.

Dr. Rabajante provides some numbers (Figure 5). Even if a “community quarantine” successfully suppresses the number of COVID-19 cases in Metro Manila until April 14, if we all go back to normal after that, a nightmarish explosion of cases could still occur – bringing us all back to square one. The problem is that the world is still 12 to 18 months (at least a year) away from a vaccine. It will take even longer to bring it to the Philippines and vaccinate a majority of our people.

This suggests government might have to enforce stringent lockdowns and social distancing for the rest of 2020, or even beyond.

In principle, suppression could work, but so far the Duterte government’s “enhanced community quarantine” has been a failure.

Government itself is the first to violate its rules and guidelines on social distancing.

For instance, thousands of motorists and commuters – including doctors, for Pete’s sake – have been held up at checkpoints, massed together in a way that promotes rather than suppresses the spread of COVID-19.

The lockdown has also been glaringly anti-poor. Poor workers, patients, and the elderly have been forced to walk for several miles because of the ill-conceived ban on public transportation.

At a time of need, the Department of Social Welfare and Development is also scaling back rather than ramping up some of its key social welfare programs, such as social pension for seniors and unconditional cash transfers.

And despite the urgency of the situation, government is also not beefing up quickly enough its testing capabilities, as well as the resources needed by our frontline health workers. As early as now, some hospitals are reporting shortages of personal protective equipment (PPE) like masks, gloves, and gowns.

All in all, government seems woefully incapable of implementing a Luzon-wide lockdown for several months on end. Absent sufficient safety nets, a protracted lockdown will also bury millions of our people deep in hunger and poverty.

Given our resources and current state of governance, it seems our best bet in the coming months (or year) is continued mitigation: case isolation, home quarantine, school closures, social distancing, and good personal hygiene.

In any case, let’s brace ourselves for tougher times and look out for one another. – Rappler.com

The author is a PhD candidate and teaching fellow at the UP School of Economics. His views are independent of the views of his affiliations. Thanks very much to Dr. Bandoy and Dr. Rabajante for valuable comments and insights. Follow JC on Twitter (@jcpunongbayan) and Usapang Econ (usapangecon.com).