A feminist in the House of Binibining Pilipinas

Apr 22, 2012 7:49 AM PHT
Facebook Twitter Copy URL
Copied
If a young woman’s dream is to be crowned queen in a beauty pageant, why should that be counted less valid than the dreams of my own youth of becoming a theater actor and singer, then an activist and erstwhile politician?

When Binibining Pilipinas invited me to be one of the judges during the coronation night last Sunday, April 15, my knee-jerk reaction was to remember the photo of Nelia Sancho, Maita Gomez and other Makibaka members protesting in the late 1960s or early 1970s outside the venue of a beauty pageant.

Then my advocate’s reflex kicked in: why not commit an act of subversion and use it as a platform to amplify the public conversation about Akbayan’s magnificent obsession – reproductive health?  On coronation night, I formulated a question for the Q&A portion based on the RH bill, and even stuck an RH pin on the neckline ribbon of my canary yellow gown.

I’ve been speaking at provincial fiestas these past couple of years, and have occasionally been a judge in the local beauty contests in the evenings: in Daraga, Northern Samar, Cebu City and Tanauan. As an Akbayan member, I’ve taken the opportunity to immerse in the many positive elements of our people’s local cultures: how we proclaim identity, celebrate beauty subversively, celebrate our local red-letter days and express our pride of place, to borrow Augusto Villalon’s line.

At  the same time (and this is the present-day incarnation of my Makabayan photo moment), as a feminist party, Akbayan opposes the sexism and patriarchy of Philippine society whose insufferable expressions include the reduction of women to face-and-body sex objects and our demotion to half-humans, half-citizens in a society of institutions lorded over (literally) by men.

In the past several years, I’ve met a number of crowned and aspiring beauty queens. Yes, they are tall, beautiful, sexy, personable and smart. But beauty is not the only narrative that I saw.

Some of them were poor as young girls; they tell these stories as part of their narrative of  humility and determination. One of them joins beauty contests to put her younger siblings through school. All of them behave like citizens of a future society where a woman can make her way in the world not just because she’s beautiful and regardless of her class origins.

My realization: if a young woman’s dream is to be crowned queen in a beauty pageant, why should that be counted less valid than the dreams of my own youth of becoming a theater actor and singer, then an activist and erstwhile politician?

We fight for a country and a world where glass ceilings and boxes are smashed, not to impose another orthodoxy about what women should aspire for and become, but to enable us to have and exercise choice in every aspect of our humanity and citizenship.

During the best in swimsuit competition, I began to overdose. Being a woman, too, I found many of the candidates sexy, and began to get confused about whom I should select as best in swimsuit.

A former beauty queen seated behind me who had asked if I was enjoying myself laughed when I told her about this. She said, yes, after a while, we begin to look like each other.

In the Q&A portion, I wanted to ask this question  – on whether a woman has the right to learn about family planning, including the use of contraceptives. Or the question on whether transgender women should be allowed to join the Binibining Pilipinas. Or the question about self-esteem and solidarity among women.

But I had to ask an organizer-provided question about being forced to choose between husband and career.

So I read the question in English, then translated it into Filipino and told the candidate she could answer it in whichever language she was more comfortable in. It’s the same principle in mother language education: we learn best in the language closest to our heart.

Understanding something, we can better think and speak about it.  Naming the world, we can change it:  win a crown, achieve both personal and professional fulfillment or push a reform.

Who would have thought that a beauty pageant could be soil in which to plant such seeds of empowerment?

A feminist “lost her way” in a court of queens, and discovered that it was not an irredeemably enemy kingdom after all. Perhaps from divergent roads, through women’s struggles outside and inside such controversial spaces, we can forge a path and find our way home. – Rappler.com 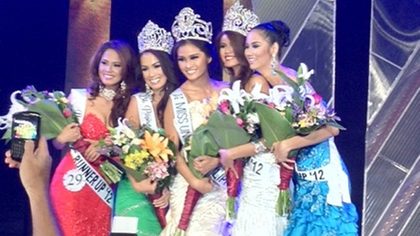 Risa Hontiveros is a Filipino activist, single mom, and politician who was the representative of the Akbayan Party to the Philippines’ House of Representatives from 2004 to 2010.