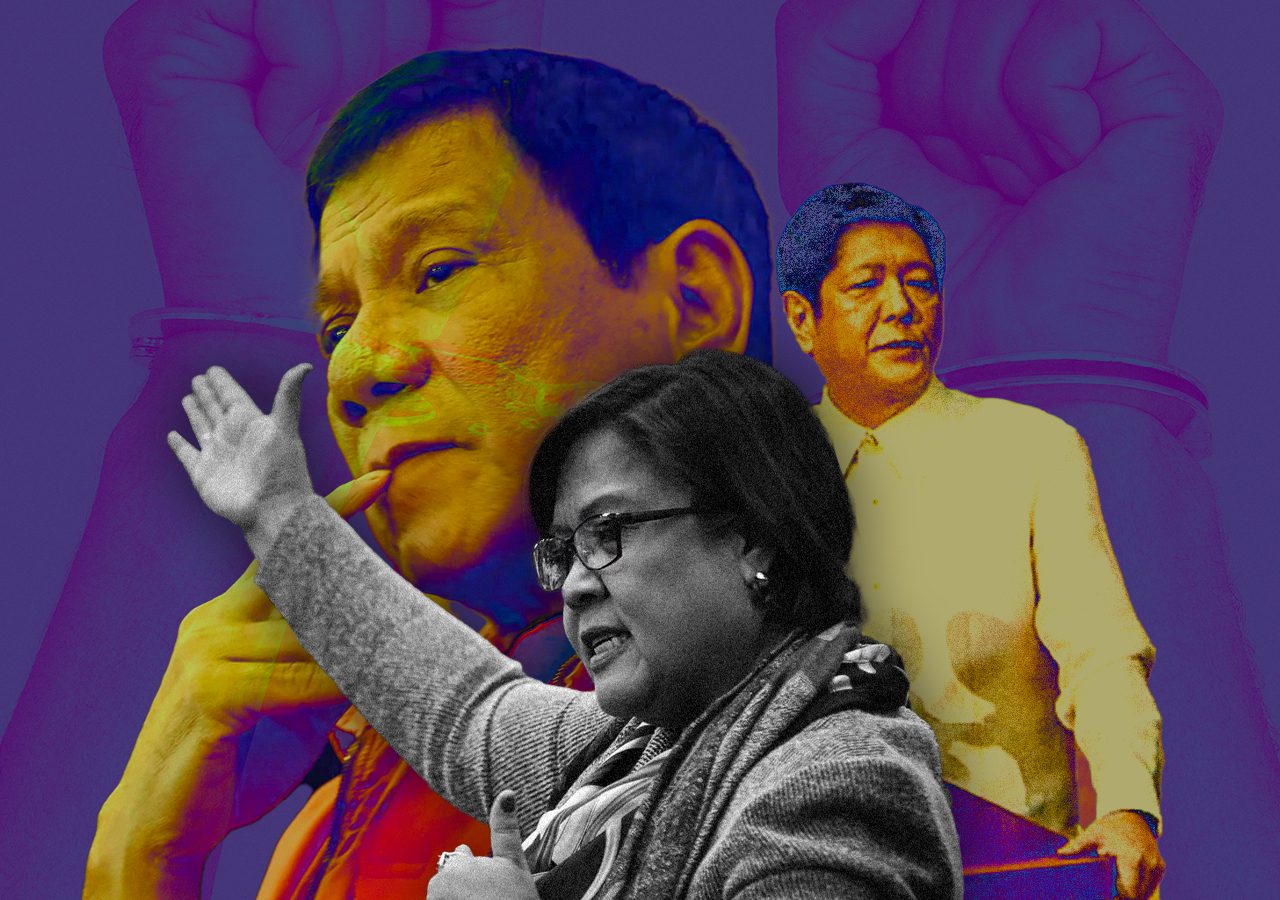 “What went through my mind was this was my last hour on earth,” Leila de Lima told me as she recounted her terrifying experience of being taken hostage in October by a desperate fellow detainee at the Philippine National Police’s Custodial Center in the heart of Metro Manila.

Blindfolded and tied hand and foot to a chair, she was told by her captor that if the vehicle he had demanded did not arrive by his self-imposed deadline of 7:30 am, she should prepare herself to exit this existence with him, pressing his long knife to her breast to make the point.

“The mistake he made was to ask for water,” she said, and when a seemingly unarmed policeman came to hand him a plastic bottle, he was briefly distracted, enabling the policeman to quickly pull out a small pistol hidden in his pocket and shoot him on the head at point blank range. “I was quickly hustled out, and it was only when the blindfold was removed that I saw my legs splattered with blood.”

Along with Russian democracy leader Alexei Navalny and journalist Julian Assange, former senator Leila de Lima is probably the world’s best known political prisoner. The only reason she was even in jail on October 9, 2022 – when the hostage-taking took place – was because of the arbitrary decision of one man, former president Rodrigo Duterte.

De Lima was placed in jail nearly six years ago when the Justice Department charged her with the “non-bailable” offense of participating in the illegal drugs trade. At the time, as the chairperson of the Philippine Senate’s committee on justice and human rights, the recently elected De Lima was heading up an investigation of extrajudicial killings in Duterte’s then ongoing “war on drugs”– as well previous executions in the southern city of Davao, where Duterte had been mayor for the better part of nearly three decades.

Duterte had De Lima jailed on “evidence” fabricated from the testimonies of convicted drug dealers at the New Bilibid Prison – the very same prison that De Lima had ordered raided for illegal drugs while serving as secretary of justice in the preceding administration. The sheer effrontery of the move to smear her for allegedly receiving funds for her campaign for the Senate from drug lords stunned many people, making them question their initial common sense or instinctive reaction that the accusation was utterly false.

But what disarmed many of her potential allies was Duterte’s parallel attack on De Lima’s character, painting her as “an immoral woman,” enjoying a Lady Chatterley-like sexual liaison with her driver.  In a masterful move, Duterte dredged up both gender and class prejudices in the patriarchal mind of the Filipino male, whose unspoken code is that while a married man may have many liaisons, it is a no-no for a married woman to have an affair – and doubly so if the woman is from the upper or middle class and the man is from the lower class. The senator’s marriage, in fact, had already been judicially annulled, but Duterte and his minions conveniently swept that fact aside. “He knew that to succeed in railroading me to jail, he had to first destroy me as a woman,” De Lima told me.

Nearly six years after those tumultuous events, which included hearings in the House of Representatives, where her character was ripped to shreds by the president’s attack dogs, hardly anyone still believes the charges brought against De Lima. The key witnesses against her have all recanted their testimonies, saying they had been coerced into making them.  One critical witness died under suspicious circumstances at the national penitentiary, where suspicious deaths regularly occur, allegedly after making it known that he planned to recant his testimony.

One of three cases accusing De Lima of involvement in the narcotics trade has already been dismissed.  The government has lost its principal witnesses in one of the two other cases, while its case is crumbling in the second case owing to the sheer incredulity of the so-called witnesses’ accounts under questioning – and the absence of any physical evidence of money changing hands. So what’s preventing the Marcos administration from releasing her? The official line is that her case is no longer with the executive but the judiciary. “But that doesn’t hold water,” says De Lima. “The executive filed the case against me, and it can withdraw the case if it wants to. It doesn’t need to wait for the judge to rule on it.”

It’s not that the current president, Ferdinand Marcos Jr, the son of the dead dictator, is not unaware of the negative effect of De Lima’s continued detention. US Senators Dick Durbin, Ed Markey, and Patrick Leahy are but a few of the many international political figures who have pressed him to release De Lima.  In fact, Marcos Jr called her immediately after the hostage incident to convey his concern, offering to transfer her to another jail to pacify the local and international outcry at her continued detention in proximity to dangerous criminals.

“The hold-up is political,” asserts Fhilip Sawali, the former chief of staff of De Lima’s Senate office.   Marcos is not willing to cross swords with Duterte.  For the former president, De Lima’s rotting in jail is not only payback for her daring to investigate his human rights record; he also knows that with the International Criminal Court bearing down on him, De Lima is the one person who has the facts that can convict him and potentially send him to the ICC Detention Center cell in the Hague – facts gathered while she was chairperson of the Commission on Human Rights and later head of the Senate’s Committee on Justice and Human Rights.

Marcos Jr. fears destabilization by Duterte loyalists entrenched in the bureaucracy, the police, and the media. Although his daughter, Sara, ran for vice president on Marcos’ ticket, Duterte has distanced himself from Marcos, who was widely perceived to be the presidential candidate that Duterte referred to – but never mentioned by name – as a cocaine user in the run-up to the May 2022 elections.

The assassination of a radio broadcaster critical of Duterte, Percy Lapid, in October brought relations between Marcos Jr and Duterte to a new low – which has also complicated the chances of De Lima’s being released soon. The head of the Bureau of Corrections, a Duterte appointee, was implicated in the killing, forcing the head of Marcos’ Department of Justice, to suspend him. At that point, media people close to Duterte sprang into action, harshly criticizing the justice secretary.  The talk in Manila is that the Duterte loyalists’ aggressive rhetoric was meant to warn Marcos’ people from following leads that might point to someone higher than the implicated official. Fearful of the consequences of worsening relations with a figure whose loyalists remain planted strategically throughout the government, Marcos is afraid to even grant De Lima bail, much less withdrawing the case against her.

No substitute for freedom

The years in detention have not been a total waste since De Lima, a lawyer by profession, has eagerly plunged into scores of books on philosophy, political science, sociology and economics provided by sympathizers. But she is anxious to get out – not only to be reunited with her family but also to begin working to support herself since, having lost reelection to the Senate, she no longer has a salary.  She will not, however, accept a deal where she would be placed under house arrest.  She is fighting for full exoneration via the withdrawal of the charges or being proclaimed innocent by her judges, though she is willing to pay whatever it would cost to post bail while the courts decide on the cases against her.  She continues to be “cautiously optimistic” about being released, claiming to see signs of impartiality in the judges presiding over her remaining cases.

Being exonerated or declared innocent is not her end goal, she tells me as my visit nears its close.  She reminds me that she will not rest until she ends what she began over 12 years ago, when she was still the chairperson of the Commission on Human Rights investigating the role of Duterte in the killings conducted by the fearsome shadowy outfit known as the “Davao Death Squad” while he was still mayor of that city.  Her ultimate objective is to put Duterte in jail for crimes against humanity. It is in this connection that some friends have told her that, paradoxically, she might be safer within prison walls than on the outside, where she could be vulnerable to attempts by Duterte’s people to permanently silence her – as happened to Percy Lapid.

However De Lima discounts the idea of remaining at the police custodial center, saying that the hostage incident convinced her that her life is equally vulnerable in prison. On the possibility of being assassinated once released, she says: “I am willing to take that risk. There is no substitute for freedom.”

As I bid goodbye to Leila de Lima, I am very much aware that I am taking leave of an authentic hero – who will long be remembered for enduring punishment for doggedly standing up for human rights in a dark era in our nation’s history, for standing firm against all the falsehoods and misogynistic abuse thrown at her, for her iron determination to make accountable a despot many regard as responsible for the extra-judicial execution of some 27,000 of our compatriots that were tagged as “addicts.” Though she still awaits release, she has prevailed. – Rappler.com

This piece was first published on The Nation. We are republishing it with its permission.

Walden Bello is the adjunct professor of sociology at the State University of New York at Binghamton.  The author or co-author of 25 books, his articles have appeared in The Nation, New York Times, Guardian, Le Monde, and other publications. A member of the Philippine Congress from 2009 to 2025, he has been charged with cyber libel by the camp of Philippine Vice President Sara Duterte for questioning the latter’s record as a public official in the run-up to the May 2022 Philippine elections.