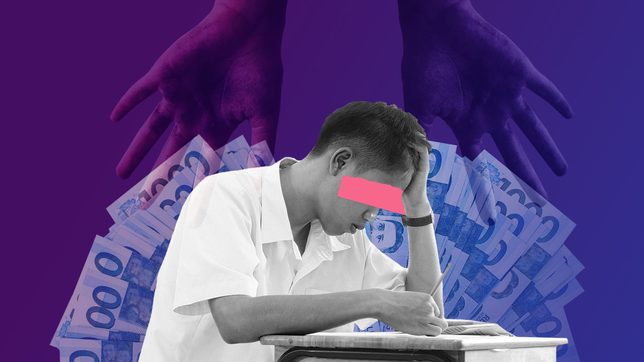 The latest jobs report isn’t as rosy as it looks.

Granted, the unemployment rate dropped to 8.7% in October. That’s lower than the 10% in July and the abysmal 17.6% in April.

It also translates to 3.8 million Filipinos unemployed in October, 758,000 fewer than in July.

The shrinking ranks of both the employed and unemployed can be explained by a significant and unsettling decline of the Philippine labor force. From July to October, a whopping 2.23 million Filipinos dropped out of the labor force.

With fewer Filipinos in the labor force, our economy’s recovery is at serious risk of stalling. What’s more, the pandemic has pushed women out of the labor force more than men.

The Philippine Statistics Authority defines the labor force as those Filipinos 15 and over “who contribute to the production of goods and services in the country.”

The more people there are in the labor force, the more farmers work our fields, the more workers assemble machinery in factories, the more cooks and waitstaff serve in restaurants, and the more teachers impart knowledge to our children. Simply put, the more productive the economy is.

But for many reasons, people aged 15 and over may choose to drop out of (that is, not participate in) the labor force: say, those who choose to study, take care of their children, or retire early.

The proportion of the labor force in the working age population is also called the labor force participation rate (LFPR). Figure 2 shows that the LFPR plunged to 58.7% in October. That’s the second worst LFPR on record, beaten only by April’s 55.7%.

Doubtless, the COVID-19 pandemic has pulled down labor force participation to historic depths. We’re in the middle of the country’s worst recession (or sustained economic downturn) since World War II, and decent job opportunities are dearer than ever.

But notice that even before the pandemic, starting around 2015, the LFPR has been on the decline.

Some have posited that this is on account of policies such as the Department of Education’s K-12 program, as well as the free college tuition law — both of which have induced young people to study rather than work.

With the onset of online learning late this year — around October — labor force participation has plummeted yet again.

But data show that more than half of the labor force’s decline can actually be attributed to those aged 25 and above. These adults either became discouraged by the lack of good job opportunities out there, or otherwise chose to study again.

Another feasible reason for the drop in adult participation in the labor force could be the extraordinary demands of child care amid the pandemic.

Parents who should otherwise be working are finding themselves having to stay at home and look after their kids — especially to oversee their kids’ online education.

Mothers might bear the brunt of this task. Data show that women outnumber men in the ranks of those newly not in the labor force (Figure 3).

And since January, women’s LFPR has dropped a lot more than men’s (Figure 4).

This phenomenon is far from unique to the Philippines. All over the world, women have been hit harder by the pandemic, leading some to call the global recession as a “shecession.”

A dearth of data limits our ability to unpack this trend in the Philippines. But in the US, at least one study showed that the pandemic has lowered not just women’s labor supply but also their wages — worsening already yawning gender wage gaps.

We can only hope that this is but a temporary shrinkage of the labor force, especially among women.

But until schools are safe to fully reopen, parents all over the country — especially mothers — might have to continue working fewer hours or staying at home for their kids, thus protracting our economy’s already uncertain recovery.

Severe job disruptions across many sectors might also explain, to some extent, the decline in labor force participation.

Figure 5 shows that between July and October this year, agriculture shed more than 1.1 million jobs, likely because of the string of devastating typhoons (think Quinta, Rolly, Ulysses) and the severe floods that resulted from them.

Next to agriculture, industry shed almost half a million jobs (mostly in manufacturing, mining and quarrying, and construction).

But, at the same time, sizable losses were seen in wholesale and retail trade (more than half a million jobs), as well as public administration (126,000 jobs), and transportation and storage (89,000 jobs).

These figures tell as that disasters pose a significant threat to labor force participation and employment. But while job losses from the typhoons are likely to be temporary, the pandemic will invariably cause a more permanent recalibration of our job market.

Some low-wage jobs won’t be returning any time soon, while other jobs — especially those that can be feasibly done online and offsite — will thrive.

But too few jobs in the Philippines can yet be done remotely.

More than ever, government must aid our ailing labor markets. Too many Filipinos are dropping out of the labor force, and this almost certainly means our economy will take a longer time to recover.

We haven’t even started talking about overseas Filipino workers, 310,000 of whom have already been repatriated with little to no prospects here at home.

Unfortunately, but unsurprisingly, the Duterte government seems indifferent to the plight of huge swaths of our labor force.

The 2021 budget, for instance, has slashed rather than expanded budgets for programs designed to help workers amid the pandemic. These interventions include cash transfers, wage subsidies, and zero-interest loans.

Policies addressing more long-run concerns — including the transition from dying to thriving jobs — are also wanting.

Moving forward, we ought to ask: What is government doing to keep Filipino workers in their jobs? To help displaced and discouraged workers — especially women — find work in the thriving sectors of our economy? And to promote more work-from-home arrangements?

No economic recovery will come if government continues to neglect the Filipino worker. – Rappler.com