[OPINION] A government speaks with 1 voice – that of the President’s, and his alone 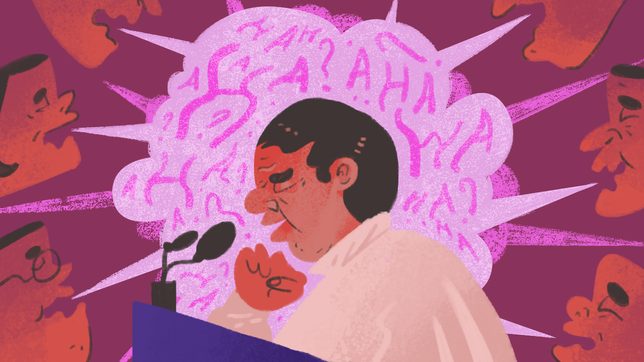 Facebook Twitter Copy URL
Copied
'It matters that the President can get his entire message across to the public without having an unknown set of officials cutting, revising, and editing the footage.'

Last March, during one of his first COVID briefings, the President began to ramble, which after 4 years, was not surprising. What caught my attention however, was when his longtime aide and now Senator Bong Go interrupted him, pointed to the piece of paper before him, and told him something along the lines of, “Sir, pakibasa na lang po nito.”

The sheer audacity to do that to a sitting President on live TV was amazing. How the President reacted was even more amazing – he didn’t even get irritated. Instead, he thanked Go and dutifully his followed instructions.

For a constitutional democracy, this was a significant moment. We elect only one President. And to that person goes all the powers of the executive branch. That is why every word the President utters is important. His word IS government policy. And his words become orders to his troops as “commander-in-chief.” All Presidents go off-script, but when they do, it is the spoken words that are controlling, not the speech written for them. With so much at stake in every utterance of the President, it is constitutionally significant that whatever he says, whatever he writes, are his own words. Not anyone else’s.

This is why, to me, one of the most striking moments in the recent State of the Nation Address was the President’s remark, “Kung hindi ninyo ako naiintindihan sa binabasa ko, mas lalo ako” [Roughly: “If you don’t understand what I am reading, me too.”] Of course, he was joking. Presidents after all rarely write their own speeches. But the nervous laughter that followed this “joke” revealed that even his captive audience wasn’t sure how far the “joke” was from the truth. Because whether they were aware of it or not, everyone who heard this “joke” got reminded of certain incidents over the past several months.

Incidents like former NEDA Secretary Pernia’s candid remark after abruptly resigning that the “orchestra is not well orchestrated.”

Or that incident earlier this month when the entire country was troubled by the announcement of the DILG’s plan to conduct house-to-house operations to find COVID-19 patients. Pressed by reporters, the Secretary of Justice candidly admitted that he was not consulted by the DILG on this controversial plan. To learn that a well-regarded expert on the law like the current Secretary of Justice was not even looped in before the plan was shared to the public was quite troubling. Since the proponent and the SOJ both belong to the same COVID Task Force, one assumes that prior coordination would have been simple. These are constitutional rights at take after all. And when this was followed by the Philippine National Police saying that they believe they can do it and are ready do it, the nation was genuinely confused. Who do we believe?

In another section of the kingdom, we see another incident – with much lower stakes but indicative of the same malaise. The MMDA wrote the head of another agency (the Film Development Council of the Philippines) and accused it of trying to “steal” the administration of the Metro Manila Film Festival from the MMDA. As payback, the MMDA removed the head of the FDCP from its Executive Committee. One wonders why handling a film festival is worth squabbling for but, there it was.

All these incidents remind me of those movies (and Korean teledramas) where competing ministers would clash in front of the Emperor. One realizes that in most if not all of those scenes, clashes between ministers happen when the Emperor is losing his grip. Contrast this with Emperor Palpatine in Star Wars who presided over a galactic empire of a hundred planets. Palpatine was old, but not decrepit. The hand of the Emperor was felt in every sector of the galaxy. And the Empire spoke with one voice. His.

To just blithely say that it “weakens government when its heads publicly disagree” would be unfair. It ignores the fact that most of these officials are motivated by a genuine desire to do their best to protect us from a global pandemic. Disagreements in policy execution are bound to arise even during normal times. Rather than fault the officials, it is important that the person required to steer the ship be perceived to be firmly back at the helm. When the captain locks himself inside his quarters, you cannot blame his crew for doing the best they can when the ship meets a storm. When firm leadership is lacking, even the best and well-intentioned of us can be reduced to disorganization. And you cannot fault the public for noticing it. (READ: Where is the Supreme Court’s full decision junking Duterte health case?)

Which leads me to the most troubling incident of all – the discovery by several journalists that some Palace officials have taken it upon themselves to edit the President’s official briefings before they televise it – sometimes taking an entire night to do so. One particular incident involved an attempt to edit out a reference to ABS-CBN. This is wrought with constitutional implications. I cannot imagine a duly-elected President being actively subjected to censorship by his own staff. It matters that the President can get his entire message across to the public without having an unknown set of officials cutting, revising, and editing the footage.

Because whether you voted for him or not, whether you believe him or not, it is his words that the Constitution values. His words – as he says them, not as his staff frames it or edits it. It is quite telling that even the Presidential Spokesperson, who is doing his utmost best to defend the indefensible, had to beg off and disavow this incident, pointing to other agencies (PCOO) instead.

Regardless of our politics, it was only this President who was elected to run the country in 2016. It is only by his lawful orders that we as citizens, owe a duty to abide. The President’s own words must speak fully and true. And it cannot be supplied or be subject to evaluation by anyone else. Not a senator and certainly not an unknown, un-elected cabal of palace functionaries.

Government speaks with one voice, and that voice must be the President’s and his alone. For this to happen, the President himself also has to stop creating impressions that make it look otherwise. Yes, even joking ones. The country’s chances to survive the COVID pandemic will depend on his “well-orchestrated” leadership. Beyond the pandemic, the more he describes himself as powerless (“inutil”), the more other countries who desire to take over our territories will move to advance their interests.

To a foreign conqueror, there is nothing more tempting than a king who sits on the throne but has lost his kingdom. – Rappler.com