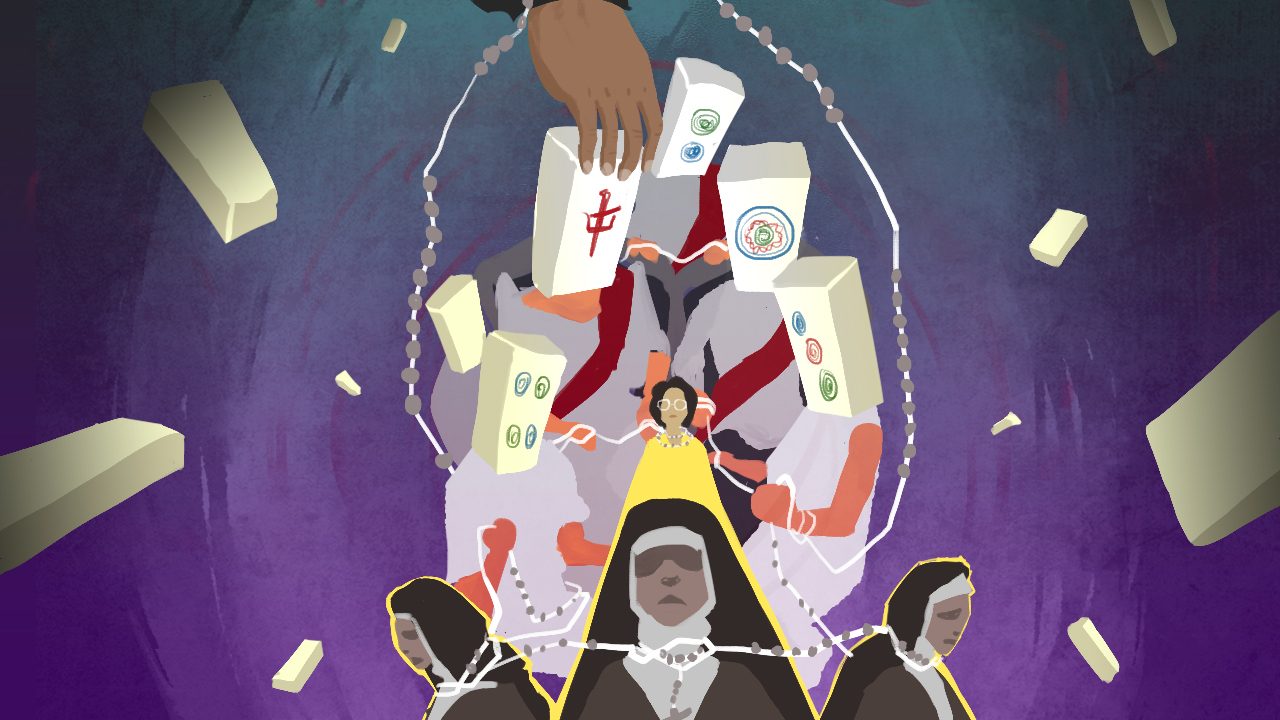 While the Filipino people should be strongly encouraged to support the local movie industry, the right to free expression is not absolute, when tsismis and distortion of actual events are presented as a historical fact, and disrespect, insults, and lies as a form of entertainment. In particular, I am referring to how the movie Maid in Malacañang not only erroneously, but also very maliciously and with utter disrespect pieced together, in its second teaser and in the movie, the former President Corazon Aquino and the contemplative nuns with mahjong.

Senator Imee Marcos, the Creative Producer, has maintained that Maid in Malacañang is a work of truth, not historical revisionism…. So, as much as possible, everything is accurate and historically correct.” (Maila Ager, Inquirer, Aug 3, 2022). She, then, encouraged everyone to first watch the movie before making any comments.

To be fair, I am writing this reaction commentary after watching the official trailers and the teasers, and the movie (so I can be more objective), the long interviews of Director Darryl Yap  with Boy Abunda, Ka Tunying, etc. in YouTube, and doing my own research, consultations, and analysis.

I watched the full-length movie at SM San Lazaro, Cinema 3, on August 4, 2022 at 1:45 pm, thanks to the City of Manila’s limited free admission policy to senior citizens. With no intention to downgrade the brilliant acting of the cast, the creative cinematography, and the provocative directing, among others, I will only comment in this paper two particular scenes of the movie that I find unfairly disrespectful to the late President Cory Aquino and how the contemplative nuns were falsely and maliciously linked with mahjong, which in the minds of many Filipino people, is still a form of “gambling,” and doing so at the height of the three-day People Power Revolution is very ridiculous. Below are the two scenes in the movie that are clearly, and to say the least, based on distorted historical events, a lack of diligent research and poor judgment.

In one room in Malacañang, one of the maids narrated the ongoing events outside of the palace, not just in EDSA, but also in Cebu, where Cory was, at the time when Enrile and Ramos defected. The maid continued to narrate that Cory went to a monastery to play mahjong with the sisters.

This is the first time that the word mahjong was mentioned in the film. That is pure tsismis and a malicious one. Did one of the maids really narrate the event in this manner, and from which source, or was it merely an addition of a farcical cameo by the director with approval from the Marcoses?

That President Cory was in Cebu and had gone to the Carmelite Monastery for refuge was factual and supported by credible evidence and statements of the Carmelite nuns, the sisters of St. Therese of the Child Jesus. But going there to play mahjong was a blatant lie.

Why did the director put words into the mouth of the maid? It is an insult not only to the integrity of the nuns, but also to that of our domestic helpers or our kasambahays, as if to grant them the license to spread lies or provide fake news, and be held less accountable for their words and actions. Was this portion of the movie simply a promotional strategy and an appeal to our OFWs, with the intention to allure them to come and enjoy the latest gossip, a distorted form of entertainment, before these manufactured lies are forced into the psyche of the unsuspecting moviegoers as “historical truths?” Thanks to our beloved Carmelite contemplative nuns who have the integrity and the moral courage to expose and defend the truth. This is a combination of the Maid in Malacañang official trailer and its second teaser, where Cory is portrayed frantically yelling over the phone the words, “Get them out of the Philippines!” while the nuns are leisurely playing mahjong.

In this second scene, which is shown towards the end of the movie, Cory is maliciously depicted as playing mahjong with a group of sisters robed in white with pink linings, and supposedly, Cory telling the US Ambassador to the Philippines, Stephen Bosworth, “Get them out of the Philippines.”

In the book, People Power: An Eyewitness History. The Philippine Revolution of 1986 (authored by Monina Alarye Mercado, Reed Business Information, Inc. 1986 p. 240), Cecilia Muñoz Palma, the first female Supreme Court Associate Justice, wrote: “On Tuesday  evening, I was with Cory in the home of her sister, Josephine Reyes. There Cory received the  phone call from US Ambassador Bosworth….”

Director D. Yap insists that he got his information from Juan Ponce Enrile, without providing compelling credible evidence. Was Enrile with Cory and Justice Palma at the home of Miss Reyes, at the time that Cory talked with the US Ambassador? It is, however, unbelievable that this event happened or could happen in the confines of a monastery. The setting of the movie also shows grave irreverence and disrespect to religious sensitivities with a group of nuns playing mahjong, while in their background is an altar with two lighted candles and the statues of the Blessed Virgin Mary, Our Lady of Fatima, and the Sacred Heart of Jesus.

Such scene in the movie must be a product of the figment of a wild and strange imagination and wicked intent. Indeed, what an incredible researcher! It is an insult to the intelligence of the Filipino people. Or was this intentional from the mind of a sadistic director who enjoys hurting people and provoking them so that he can get more attention and the movie becomes more profitable? Yap may find a misleading and convenient excuse by pointing out that the nuns in this second scene do not refer to the Carmelite nuns because the sisters were not wearing the brown habit, but a white habit with pink linings, and Cory was already in Manila when her telephone conversation with the Ambassador took place. But Yap is not yet off the hook. Kristofer Purnell, a graduate of AB Communication from the Ateneo de Manila University and a content producer for Philstar’s Lifestyle and Entertainment Section, in his article, “Giselle  Sanchez criticized, Cory Aquino Mahjong scene ‘research’ explained” (published by Philstar  on Aug 3, 2022) tried to provide a possible “research-based” explanation, but an erroneous one, for the inclusion of the mahjong scene in the second teaser.

The sub-section of the article, “Yap backs mahjong scene,” has caught my attention and interest. Purnell writes: “Yap posted on the Facebook page of his studio VinCentiments excerpts from American journalist Anne Nelson’s piece, ‘In the Grotto of the Pink Sisters,’ from Mother Jones Magazine.… The director highlighted a portion of Nelson’s article that said Aquino had frequented the Grotto of the Sisters of Perpetual Adoration and that she grew close to a Sister Christine Tan who often played mahjong with her fellow nuns.” Purnell provided the link to the article but gave his readers a free hand to do their own research. He continues that “Yap then claimed the Carmelite nuns were just reacting, as he said Aquino was in Manila when the Marcoses fled the country, not among the Carmelite Order in Cebu.”

Because the article linking the Sister-Servants of the Holy Spirit of Perpetual Adoration (SSpSAp) contemplative nuns, who are popularly known in the Philippines as the “pink sisters,” was mentioned as the source of the scene where nuns were shown playing mahjong, I checked the website and carefully read the 10-page article entitled, “In the Grotto of the Pink Sisters. Cory Aquino’s Test of Faith” (Anne Nelson, Mother Jones  Foundation for National Progress, San Francisco, CA, Jan 1988, pp. 19-24, 49-52).

The film’s director or its researcher must have clearly misread or misunderstood the article. Although she is critical of the Aquino administration, Ms. Nelson has remained very respectful of President Cory Aquino and the pink sisters. It is the “’perfumed ladies, taking the afternoon off from the mah-jongg [sic] circuit,” that are clearly linked to mahjong, and not to the late President Cory Aquino, or Sister Christine Tan, who is not a pink sister, or the nuns.

In an interview with Mr. Boy Abunda, director Darryl Yap confided that one “trademark” or “formula” to get people is to provoke them: “All of my films should be provoking, should be controversial…. I want to hurt people talaga (really) so they’ll pay attention. Because in this day and age, if you are hurt, you cannot forget.” But he also confided that he has found a way “to stay unhurt when I am hurting others.” (Youtube, The Interviewer Presents Darryl Yap, unedited, Aug. 4, 2022)

Why did this movie pick on the silent, contemplative nuns, who would rather stay in the convent praying rather than testifying in court against lies, malice, and the distortion of reality? And if the inclusion of the two scenes in the movie is just to entertain the audience, then that is poor taste, ridiculous, and offensive. Blessed are those persecuted for the sake of truth.

Is the narrative of the movie really Maid in Malacañang or/and Made with Malice? – Rappler.com

Fr. Joaquin R. Ferrer Jr., SVD is a member of the Society of the Divine Word and, currently, assigned as the Philippine Central Province (PHC) Secretary for Education and Head of the SVD Spiritual Animation Team. He was a long-time missionary in Japan, serving in the parish, migrant, and educational apostolate.