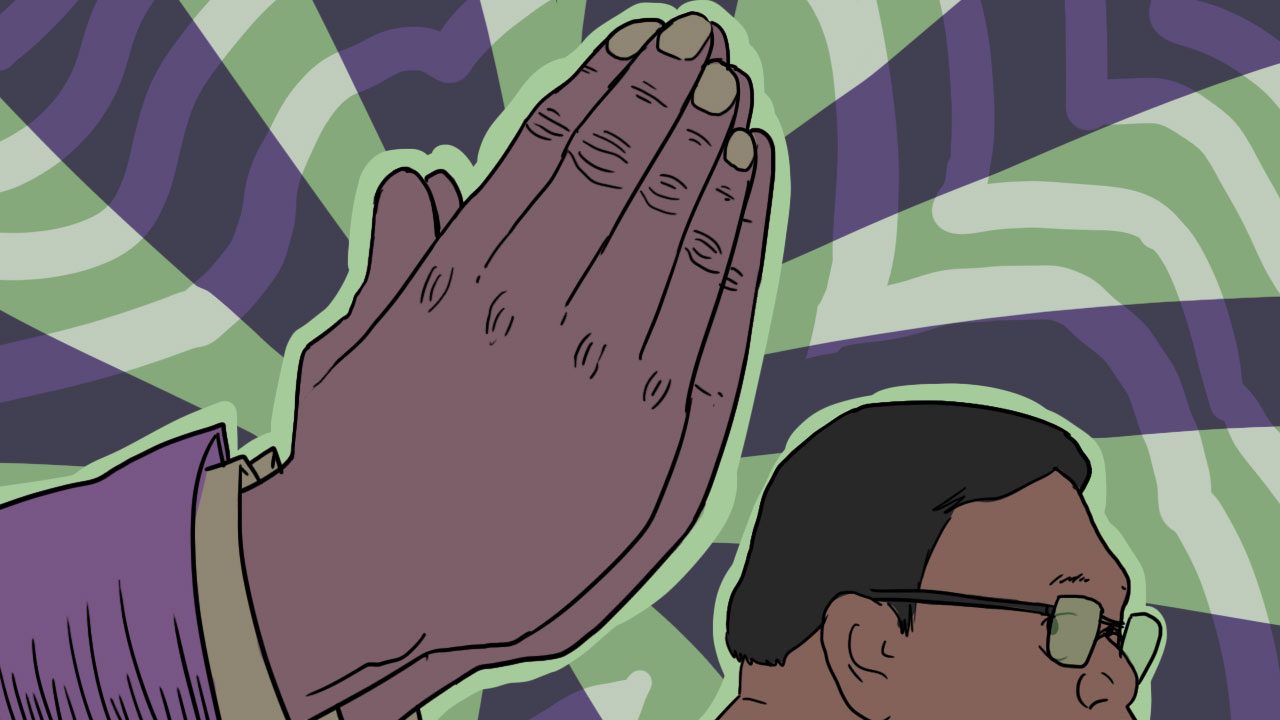 Facebook Twitter Copy URL
Copied
An influential megachurch was heavily criticized for hosting an online event to 'pray with Harry Roque.' It disregarded what he stands for.

The task of the Christian in the world is spiritual. At least that’s what they are taught in many churches around the country.

This means that they are to share the gospel, pray for people, and bring them to church.

Following the same logic, Christians should be politically non-partisan. The theological assumption is that social and political transformation begins with renewing the heart.

For this reason, churches are inspired to pray for public officials. In unity, they pray that God would give our leaders the wisdom to make the right decisions for the county.

To them, to do so is not political. Or is it?

Last week, an influential megachurch was heavily criticized for hosting an online event to “pray with Harry Roque.”

Not everyone was happy. Even members of the congregation turned to social media to express their anger.

According to one viral post, “Sure, the church is for all sinners. Okay, let’s invite Harry Roque and let’s pray for him. He needs Jesus. I have no problem with inclusivity. But to give him a platform was pushing it.”

Apologetic, its leaders responded with an open letter:

They cited 1 Timothy 2:1-4 in support of their statement.

But this biblical text states “pray for”; it does not say “pray with.”

And while the Bible does not explicitly prohibit praying with those in power, the incident involving Roque is a powerful reminder that it matters a lot whom we pray with.

Prayer is among the most holy of all Christian activities. For in prayer we commune with the highest authority in the universe. We do so to plead our case with the holy God, to ask God to answer us.

So we better enter that communion with the right company.

God is for the weak

The very content of any prayer reveals the nature of the problem, its causes, and resolution. Whether one prays for healing or the conversion of another person, prayers are petitions made by an individual or a community on behalf of someone else.

So prayers do take sides.

According to Psalm 146:7, God “upholds the cause of the oppressed” (Psalm 146:7). Clearly, God has his own preferred social group — the marginalized.

God, in other words, takes the side of the weak and the vulnerable. His words are unmistakable: “Do not take advantage of the widow or the fatherless. If you do and they cry out to me, I will certainly hear their cry” (Exodus 22:22-23).

By the same token, God never takes the side of those who oppress the poor.

In fact, even the prophet Jeremiah was told by God not to pray for those who abuse the powerless and who shed innocent blood: “So do not pray for this people nor offer any plea or petition for them; do not plead with me, for I will not listen to you” (Jer 7:16).

Take note of God’s pronouncement: “I will not listen to you.”

The controversy last week was not so much about the public nature of the announcement (for which the megachurch specifically apologized). With institutional backing, the megachurch, whether they admit it or not, took sides.

That is the issue.

The invitation has conveniently disregarded what Roque stands for as the presidential spokesperson whose record is questionable, even for his former colleagues in the academe and civil society.

The church and its supporters claimed they wanted to pray with him for the nation. One wonders: Which nation? Whose nation? Whose interests?

Therefore, for the megachurch to justify its act as a biblical mandate is myopic evangelicalism. It has no regard for those whose lives have been destroyed by this regime from its war on drugs to its curtailment of press freedom.

The megachurch has taken the wrong side.

Prayer is not just spiritual

The Lausanne Movement, representing evangelicals around the world, has made its position clear on Christian social responsibility: “The message of salvation implies also a message of judgment upon every form of alienation, oppression and discrimination, and we should not be afraid to denounce evil and injustice wherever they exist.”

To live out the gospel, in other words, is to reject too every form of evil and injustice. This is how evangelicals can be the light to every nation.

Even the United Nations has done its part by denouncing human rights violations in our country. But why do many evangelicals remain silent when it comes to injustice?

John the Baptist should be our model.

Jesus regarded him in the highest honor: “Truly I tell you, among those born of women there has not risen anyone greater than John the Baptist” (Matthew 11:11). John the Baptist rebuked King Herod for his evil act. He would never pray with anyone who supported Herod.

We end by extending an invitation to people of faith who find the gospel preached in their churches inadequate.

You feel that way because your understanding of the gospel is far bigger than you have been taught. We affirm you. Christianity is not just a personal faith.

The calling of the church is to be prophetic – to speak truth to power. In sociological speak, to be countercultural, whose reason for existence is to set captives free.

And so may you have the courage to ask questions and challenge what is being preached if necessary.

People will tell you that you are sowing discord and you may feel discouraged because of that. But remember what Jesus said: “Do you think I came to bring peace on earth? No, I tell you, but division” (Luke 12:51). There are times when even our own family and friends will abandon us because of our convictions.

But being faithful and true to God is more important than maintaining unity.

When Jesus comes to judge the world, he will also divide people. “He will put the sheep on his right and the goats on his left” (Matthew 25:33).

Whose side are you on? – Rappler.com

Jayeel Cornelio, PhD is Associate Professor and the Director of the Development Studies Program at the Ateneo de Manila University. A sociologist of religion, he is the lead editor of the Routledge International Handbook of Religion in Global Society (2020). Follow him on Twitter @jayeel_cornelio.

Rico Villanueva, PhD teaches Sacred Scripture at the Loyola School of Theology at the Ateneo de Manila University. He finished his PhD in Hebrew Scriptures at the University of Bristol, United Kingdom. He is the Commissioning Editor for Langham Literature. Follow him on Twitter @RicoGVillanueva.