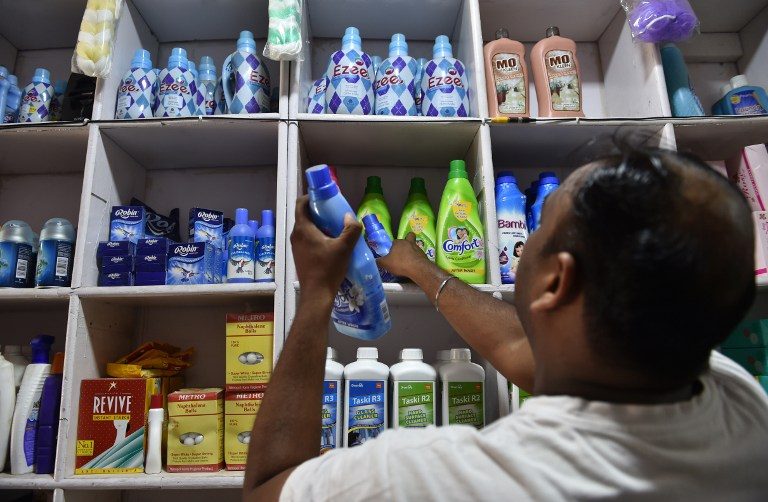 Facebook Twitter Copy URL
Copied
(UPDATED) The main rate of the Goods and Services Tax (GST) is still a topic for debate, but business leaders are optimistic it will boost India's economy

NEW DELHI, India (UPDATED) – Indian business leaders on Thursday, August 4, hailed the passage of a landmark tax reform bill that paves the way for a new national sales tax and the creation of a common market across the country for the first time.

Lawmakers voted late Wednesday, August 3, in favor of introducing the long-awaited Goods and Services Tax (GST), which will replace a patchwork of central and state levies on goods and services and marks India’s most significant economic reform in decades.

The chairman of Bharti Enterprises, one of India’s biggest conglomerates, said it would help boost the country’s economic growth by up to two percentage points.

“The transformational legislation will not just significantly improve ease of doing business in a vast and complex federal set-up like ours by creating a single market, but will help prop up our GDP growth rate,” Sunil Bharti Mittal told the Press Trust of India news agency.

But Prime Minister Narendra Modi’s right-wing Bharatiya Janata Party has faced criticism over the slow pace of the reforms it promised ahead of the last election in 2014.

The Federation of Indian Chambers of Commerce and Industry (FICCI) said just ahead of the vote late on Wednesday that the passing of the GST bill would give industry “a lot of hope on progress of reforms in the country.”

The battle to introduce the GST has been one of the fiercest of Modi’s premiership, with Congress repeatedly blocking the bill for more than a year, before finally agreeing to an amended version.

Finance Minister Arun Jaitley said at a press conference on Thursday that public opinion had been strongly in favor of the reform.

“Once GST is rolled out, doing business in India will be easier,” he said.

“In the long run tax rates will come down, and if this happens, the prices of various items can go down.”

It will be some time before GST is introduced because at least half of India’s 29 states have to ratify the move before it can be enshrined in law.

But experts saw the vote in the upper house of parliament as the key hurdle to ensuring the introduction of the GST.

It could cause India’s biggest manufacturing states to lose the revenues they currently get from selling goods across states, although they will be compensated for any losses for 5 years.

Global research firm Nomura said the short-term economic impact of GST could be mixed, but that the long-term impact “will be clearly positive.”

Jaitley has said he hopes it will be in place by April 2017, although many experts believe this is optimistic.

The main rate of the GST is still a topic for debate, with experts suggesting it is likely to end up at around 18%.

While the GST may increase inflation in the short term because the price of some goods will rise, economists say it will boost business activity and deter tax evasion.

“Prior to GST, companies in India faced multiple level tax structures, which made it difficult for them to conduct business competitively,” Arun Singh, lead economist at Dun & Bradstreet India told AFP.

“A single tax structure improves the ease of doing business and creates a level playing field for local companies in export markets,” he said.

About 150 countries worldwide have some form of GST or VAT (Value Added Tax), according to the Organization for Economic Cooperation and Development.

“The political maturity demonstrated by both the government and the opposition in forging a consensus for this landmark event is commendable,” said Harishanker Subramaniam, national leader for indirect tax at EY India. – Rappler.com