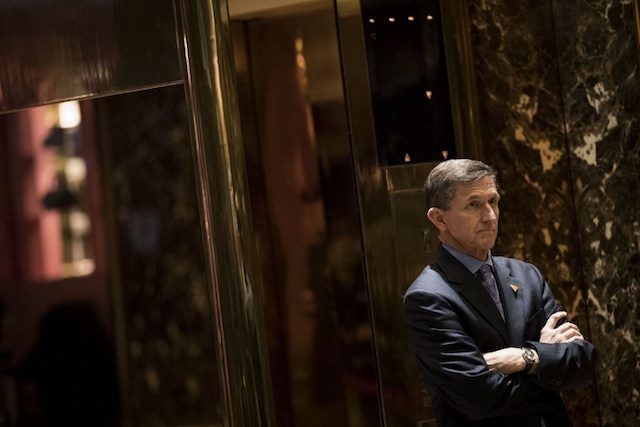 The 58 year-old retired 3-star general – a slim, energetic figure with sharp facial features – however had accommodating views on Russia and China, two countries that former president Barack Obama regarded as the main US strategic opponents.

During the 2016 presidential campaign Flynn was one of the few high-profile former military figures who advised candidate Trump, and was on the short list to be the Republican’s vice presidential candidate.

At the Republican convention that nominated Trump for president, Flynn delivered a fiery attack on Democrat Hillary Clinton, even leading the crowd in chants of “Lock her up!”

However Flynn’s fate may have been sealed when news reports surfaced over the weekend that he discussed US sanctions with Russia’s ambassador weeks before Trump was sworn in as president, and just as then-president Barack Obama was ordering new actions against Moscow over its alleged interference in the US election.

Obama had named Flynn to head of the Defense Intelligence Agency in 2012, but the retired general was forced out in less than two years amid a turbulent restructuring effort and clashes with his superiors.

Flynn’s paid appearance at a 2015 dinner in Russia sitting next to Russian President Vladimir Putin especially raised eyebrows, as did his accommodating statements toward Moscow that suggested a readiness to accept Russia’s seizure of Crimea and its support for embattled Syrian leader Bashar al-Assad.

“We beat Hitler because of our relationship with the Russians, so anybody that looks on it as anything but a relationship that’s required for mutual supporting interests, including ISIS, … that’s really where I’m at with Russia,” he told the Washington Post in August.

The main threat, in Flynn’s view, was militant Islam.

“We have a problem with radical Islamism and I actually think that we could work together with them against this enemy. They have a worse problem than we do,” he told the Post.

The son of a Rhode Island banker, Flynn had a professional army career mainly in intelligence units. In the 2000s he served in Iraq and then Afghanistan, where he became director of intelligence for coalition forces.

After leaving the Defense Intelligence Agency, Flynn repeatedly criticized the Obama administration as inadequately focused on the Islamist threat. He even published a book titled: “The Field of Fight: How We Can Win the Global War Against Radical Islam and Its Allies.”

In his book Flynn argued that Muslim countries must be forced to recognize and stamp out radical Islamic beliefs, which he says are “metastasizing” around the world.

“We’re in a global war, facing an enemy alliance that runs from Pyongyang, North Korea, to Havana, Cuba, and Caracas, Venezuela,” he wrote in the New York Post in July.

“Along the way, the alliance picks up radical Muslim countries and organizations such as Iran, Al-Qaeda, the Taliban and Islamic State.”

Like Trump, Flynn has also criticized US allies in NATO for not putting enough of their own effort and funding into the crucial western defense treaty.