North Korea soldier shot 6 times as he defected to South 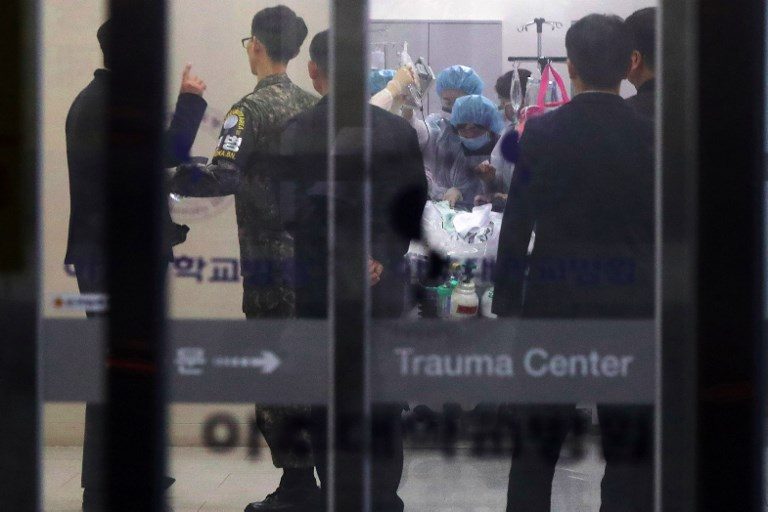 SEOUL, South Korea – A North Korean soldier involved in an extremely rare and dramatic defection to the South was shot 6 times by North Korean border troops as he dashed over the border, military officials and doctors said Tuesday, November 14.

The US-led United Nations Command (UNC), which monitors the Panmunjom border truce village where the defection occurred Monday, November 13, said the soldier had driven close to the heavily-guarded, military demarcation line separating the two Koreas in a vehicle.

“He then exited the vehicle and continued fleeing south across the line as he was fired upon by other soldiers from North Korea,” the UNC said in a statement.

An official with the South Korean Joint Chiefs of Staff said the North’s border guards fired at least 40 rounds.

A doctor treating the injured soldier – who was helicoptered to a hospital for emergency surgery – said he had been shot half-a-dozen times, including a serious stomach wound.

“He has at least six gunshot wounds on his body and the penetrating wound in the abdomen is the most serious”, the doctor, Lee Cook-Jong, told reporters.

It is very rare for the North’s troops to defect at the truce village, a major tourist attraction bisected by the demarcation line and the only part of the frontier where forces from the two sides come face-to-face.

The fact that the defector drove to the border suggests he may not have been a member of the elite corps of North Korean troops posted to Panmunjom, who are carefully vetted and selected for their loyalty.

No tourists were present at the time, because tours do not run on Mondays.

According to the South Korean military there was no exchange of fire across the border, and the UNC statement stressed that no South Korean or US forces were harmed in the incident, which happened in broad daylight around 4:00pm.

Unlike the rest of the frontier, Panmunjom is not fortified with minefields and barbed wire and the border is marked only by a low concrete divider.

After racing across the border, the soldier took cover near a building on the South side.

The Joint Chiefs of Staff official said he was found collapsed in a pile of fallen leaves and recovered by three South Korean soldiers crawling on their stomachs to his position.

In 1984, a Soviet citizen sprinted across the border from North Korea to the South at Panmunjom in a defection bid, sparking a gunbattle that killed and wounded several soldiers on both sides.

North Korean soldiers wielding axes hacked two US soldiers to death at Panmunjom in a 1976 brawl over an attempt to trim a tree there. – Rappler.com