Obama looks abroad, with eye on voters back home

May 21, 2012 10:11 AM PHT
Agence France-Presse
Facebook Twitter Copy URL
Copied
US President Barack Obama spent weekend summits trying to end one war in Afghanistan, prevent another in Iran and save the global economy, knowing that each crisis could impact on his reelection hopes 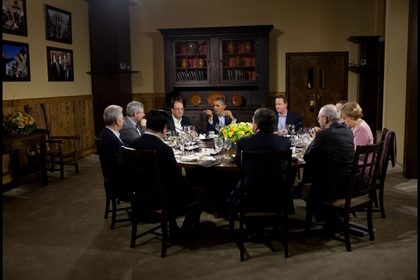 CHICAGO, United States (AFP) – US President Barack Obama spent weekend summits trying to end one war in Afghanistan, prevent another in Iran and save the global economy, knowing that each crisis could impact on his reelection hopes.

Foreign policy rarely decides US elections, but sometimes the imperatives of diplomacy can lead a president onto treacherous political ground at home — for instance as he manages sensitive ties with China.

But the G8 summit at Camp David and NATO talks in Chicago allowed Obama to bask in a statesman’s spotlight, as Republican foe Mitt Romney tried to elbow into the conversation with fuming written statements.

Obama had a chance to influence key world issues that could weigh on voters minds, or impact the US economy before November’s election, though his capacity to forge game-changing breakthroughs seemed limited.

So the NATO summit is important, as Obama locks in plans to put Afghans in charge of fighting next year, get all combat troops home in 2014 and seek commitments from allies to bankroll Afghanistan’s future army.

The summit is a pivot point in Obama’s effort to frame an end-game narrative for an exhausting war that both honors US sacrifices and avoids the stigma of a perceived retreat.

His policy also includes though the tough political sell of a 10-year commitment to Afghanistan in money and troop training after 2014 designed to ensure Al-Qaeda cannot reclaim its former terror haven.

Obama envisaged 2014 as a time when “the Afghan war as we understand it is over, but our commitment to friendship and partnership with Afghanistan continues.”

Mark Jacobson, a former deputy NATO civilian representative in Afghanistan, now with the German Marshall Fund of the United States, said ending the Afghan war responsibly could help Obama with voters, though that was not the president’s prime motivation.

“Is there political benefit for President Obama being strong on national security issues? Absolutely,” he said, recalling how the US leader took office amid a dark recession and as two wars strained his nation.

“Is there going to be a dividend in the sense of people saying yes this is the person we want to chose to be our leader again? Absolutely.

“But it is because he did the difficult thing and the right thing.”

Another issue abroad that weighs on Obama’s prospects at home is Iran.

At the G8 summit at Camp David on Friday and Saturday, Obama and fellow leaders cranked up pressure on Tehran, hoping punishing sanctions prompt a change of heart on its nuclear program.

The president hopes diplomacy will obviate the need for a US military strike to degrade Iran’s capacity to build a nuclear bomb, or delay a threatened Israeli raid that may be still possible this year.

Either scenario could unleash a wider regional war, send oil prices soaring so squelching the fragile US recovery, spark a Middle East arms race and shred Obama’s claims that he made America safer.

Bolstering sanctions, the G8 said it would ensure global markets are supplied when a European oil embargo in Tehran comes into force on July 1.

Even more fundamental to Obama’s hopes of winning November’s election is the US economy, which is slowly improving but in no state to absorb the shockwaves if Europe slumps deeper into the mire.

Around the dining table of his Laurel cabin, Obama navigated European divisions on how to fight, and contain the continent’s debt crisis.

“As all of the leaders here today agree, growth and jobs must be our top priority,” Obama said after the talks, lending momentum to signs that harsh German-prescribed austerity could be diluted with some stimulatory measures.

The leaders also backed a “cohesive” euro zone and said Greece should remain within the single currency.

But events in Europe appear to be moving at a faster pace than world leaders and the economies of Greece, Spain and Italy look fragile.

So, Obama’s fate could rest on events he cannot control, an agonizing prospect for someone known as the most powerful man in the world.

Romney, believing November will herald a close election, sought to inject himself into the conversation at the weekend, but did not fare well as foreign leaders appeared keen to share the limelight with Obama.

“At the same time that President Obama has been weakening our military, he has sent the message — intentionally or not — that the worth of NATO has diminished in America’s eyes,” Romney said in a Chicago Tribune op-ed.

The Republican also slammed Obama during the G8, praising global leaders for seeking to boost oil supplies to “strengthen our hand in confronting Iran” but criticizing Obama for taking “precisely the opposite approach.” – Stephen Collinson, Agence France-Presse