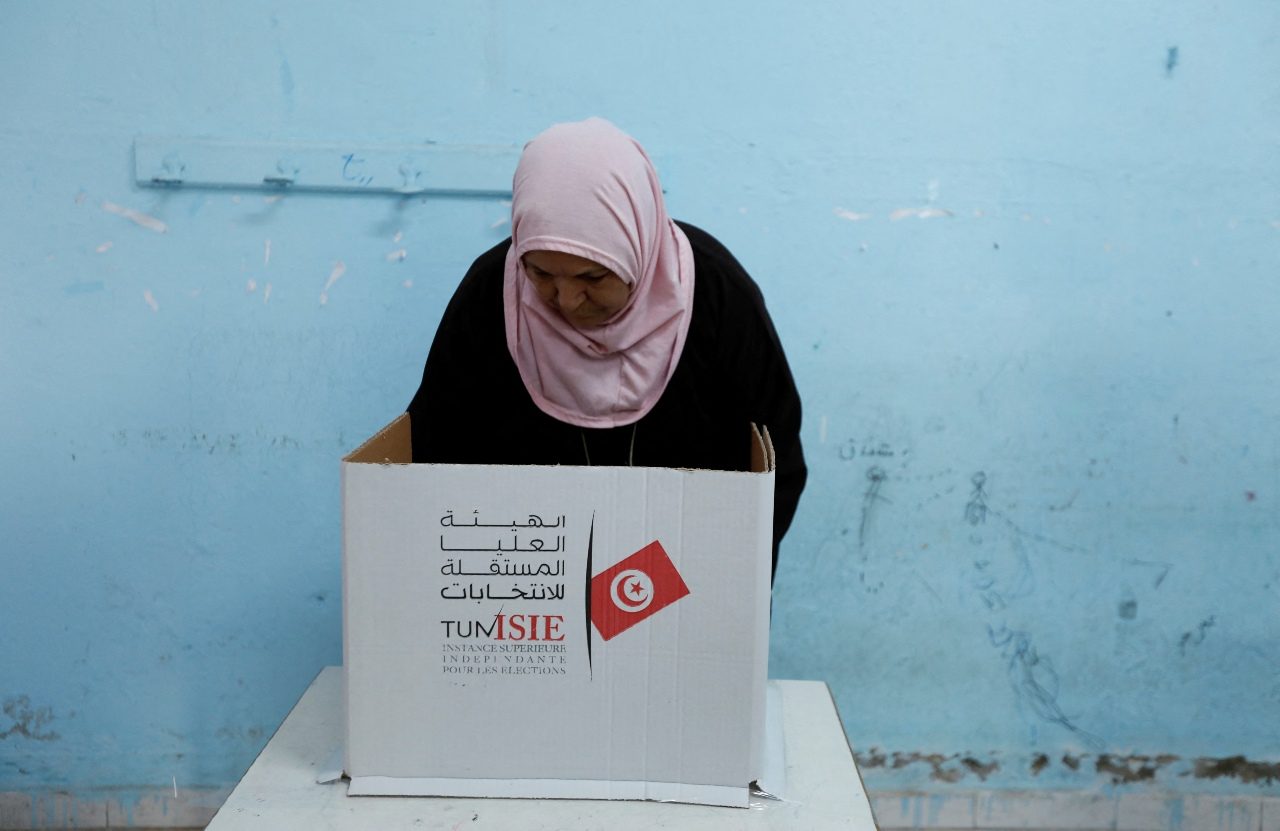 ELECTION DAY. A woman votes at a polling station during parliamentary election in Tunis, Tunisia, on December 17, 2022.

TUNIS, Tunisia – Polls opened for a parliamentary election in Tunisia on Saturday, December 17, a vote boycotted by political parties that see it as capping President Kais Saied’s march to one-man rule over a country that shook off dictatorship in 2011.

As Saied urged Tunisians to cast ballots on what he called a historic day, there was no sign of queues or voting at three polling stations visited by Reuters just after they opened, a contrast with other post-revolution elections.

Taking place 12 years to the day after vegetable seller Mohamed Bouazizi set himself on fire in an act of protest that sparked the Arab Spring, the election has appeared to stir little interest among Tunisians struggling with economic hardship and jaded by years of political dysfunction.

“Why should I vote? I am not convinced by this election,” said Abdl Hamid Naji, sitting in a cafe near a polling station in the Lafayette neighborhood of the capital Tunis as it opened at 8:00 am (0700 GMT).

“What will this parliament do?” he asked. “In the previous elections, I was the first to arrive…. But now I’m not interested.”

Saied, a former law lecturer who was a political independent when elected president in 2019, shut down the previous parliament and started ruling by decree in July 2021, gradually amassing more and more power.

His opponents, including the Islamist Ennahda party, accuse him of a coup.

There were more journalists than voters at the Rue de Marseille polling station in Tunis, which has been packed from early in the day in previous elections held in the post-revolution period.

Faouzi Ayarai, who did vote there, was optimistic. “These elections are an opportunity to fix the bad situation left by others over the past years,” she said.

At another polling station an elderly man who gave his name as Habib said he had only voted despite misgivings because he objected to the calls for a boycott.

“In this district we have only one candidate running. I voted but I’m not convinced,” he said.

A new constitution, passed with a low turnout in a July referendum, has defanged parliament and shifted power back to the presidential palace in Carthage from which Zine al-Abidine Ben Ali ruled with an iron fist before being ousted in 2011.

Nejib Chebbi, head of an anti-Saied coalition including the Islamist Ennahda party, a major force in the previous parliament, has labeled the election a “still-born farce.”

Saied has described it as part of a roadmap for ending the chaos and corruption he says afflicted Tunisia under the previous system.

Casting his vote with his wife, he urged Tunisians to do likewise. “It is your historic opportunity to regain your legitimate rights,” he said.

But I Watch, a non-governmental watchdog organization formed after the 2011 revolution, said the new parliament had been “emptied of all powers.”

Al Bawsala, another NGO that has monitored the work of parliament since the revolution, has said it will boycott a legislature that it too believes will be an instrument for the president.

The election is taking place against the backdrop of an economic crisis that is fueling poverty, leading many to attempt the perilous journey to Europe aboard smugglers’ boats.