Facebook Twitter Copy URL
Copied
(UPDATED) The Philippines changes tune to express concern over the issue with Singapore, Indonesia, and Malaysia – while Cambodia and Thailand assert that the military coup in Myanmar is an internal matter

As crisis unfolds in Myanmar, member-states of the Association of Southeast Asian Nations (ASEAN) found themselves divided over the Myanmar military’s seizure of power on Monday, February 1.

Their differences in opinion have seen member-states either express concern, adopt a hands off approach, or refrain from issuing any statement on the Myanmar military’s actions.

In the Philippines, Foreign Secretary Teodoro Locsin Jr said the country would “watch and see for ourselves” how the situation develops in Myanmar after its military detained its civilian leader Aung San Suu Kyi, along with other top officials of the ruling National League for Democracy party.

Locsin then said the military’s takeover of its government was not a coup, likening it to a “chess move” that may have been carried in the interest of protecting democracy in the country.

“Let’s hope it is for her (Aung San Suu Kyi) and her democratic project’s protection; it’s happened; the military can also close ranks for that,” he said. 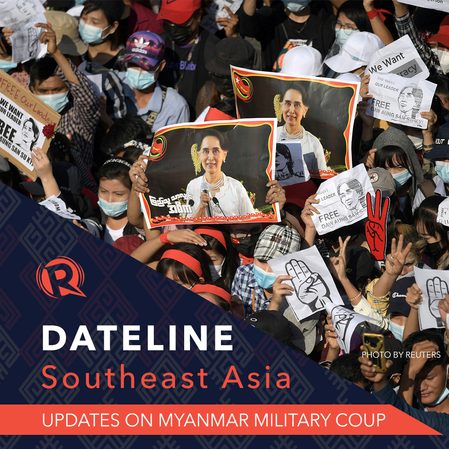 “Cambodia does not comment on the internal affairs of any country at all, either within the ASEAN (Association of Southeast Asian Nations) framework or any other country,” he said.

Cambodia’s stand was similar to that of Thailand, where Deputy Prime Minister Prawit Wongsuwan said the military takeover in Myanmar was an “internal matter” of the country.

Aside from Myanmar, the Philippines, Cambodia, and Thailand share a history of military coups in their respective countries throughout the past decades, as each state struggled to institute democratic forms of government.

On the other hand, ASEAN member-states Singapore, Indonesia, and Malaysia expressed concern over the military takeover, calling for restraint and a peaceful resolution to the unfolding coup.

A day later on Tuesday, February 2, the Philippines – which is the oldest democracy in the region – changed tunes on the issue and said it viewed the military takeover of Myanmar’s government with “deep concern.”

“The Philippine government is following with deep concern the developing situation in Myanmar, and is especially concerned with the safety of Daw Aung San Suu Kyi,” the Department of Foreign Affairs said in a statement.”

This falls in line with Singapore, which expressed “grave concern” over the situation in Myanmar.

“Singapore expresses grave concern about the latest situation in Myanmar. We are monitoring the situation closely and hope all parties involved will exercise restraint, maintain dialogue, and work towards a positive and peaceful outcome,” Singapore’s foreign ministry said in a statement.

Malaysia echoed Singapore, saying it viewed latest developments in Myanmar with “serious concern.” It urged Myanmar’s military to “give utmost priority” to ensuring peace and order and urged all parties to uphold the rule of law.

“Malaysia supports the continuation of discussion among Myanmar’s leaders to avoid adverse consequences to the people and state of Myanmar, especially in the current, difficult COVID-19 pandemic situation,” Malaysia’s foreign ministry said.

Indonesia, meanwhile, expressed concern over the situation in Myanmar and said parties should uphold the “principles of democracy and constitutional government.”

“Indonesia urges all parties in Myanmar to exercise self-restraint and put forth dialogue in finding solutions to challenges so as not to exacerbate the condition,” it said in a statement.

Meanwhile, Vietnam, Brunei, and Laos have yet to issue formal statements on the Myanmar military seizure of power in the country.

This is not the first time ASEAN has had to confront affairs concerning Myanmar.

Rights groups earlier criticized the regional bloc for failing to effectively address Myanmar’s Rohingya crisis, where state forces deployed a deadly crackdown on Rohingya Muslims. The United Nations later described as the military’s campaign against the Rohingya as a “textbook example of ethnic cleansing.”

ASEAN states have often been challenged in addressing allegations of human rights violations in its member-states, as the group upholds principles of mutual non-interference and consensus-based decision making as core values of the regional group. – with reports from Reuters/Rappler.com