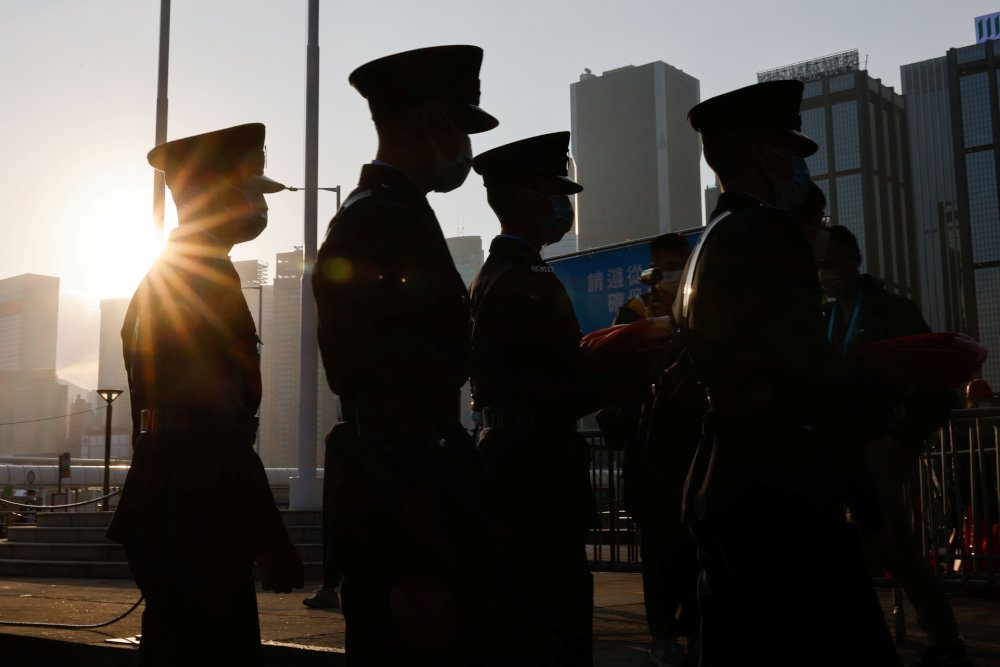 FLAG-RAISING. Police officers attend a flag raising ceremony a week ahead of Legislative Council election in Hong Kong on December 12, 2021.

Britain has scolded China for its broadening use of a national security law in Hong Kong, detailing attacks on the city’s vaunted judiciary, civil society groups, and foreign diplomats.

“The erosion of liberty in Hong Kong is an affront to freedom and democracy,” Foreign Secretary Liz Truss said in a publication on Tuesday, December 14, of her government’s latest six-monthly report on Hong Kong.

“Just over a year since the introduction of the national security law, the mainland Chinese and Hong Kong authorities have used the law and related institutions against all opposition, free press, and civil society in Hong Kong,” Truss said in a foreword to the report.

“This curtailing of space for the free expression of alternative views continues to weaken checks and balances on executive power.”

The report, which covers events up to June 30, appears to be stronger than earlier ones targeting the impact of the national security law.

Both the Chinese and Hong Kong governments issued statements condemning the report, with a spokesperson for the Chinese embassy in London warning that British “attempts to create trouble in Hong Kong or use Hong Kong to contain China will not succeed.

Beijing imposed the law on the Asian financial hub in June 2020 after months of sometimes violent anti-government protests rocked the city in 2019.

Noting use of the law against some media and journalists, the report charts pressure by pro-Beijing media that has forced trade unions and other groups to disband.

Outlining criticism from some mainland officials, it states that “judicial independence is increasingly finely balanced”.

Truss said, however, she believed British judges could still “play a positive role in supporting this judicial independence.”

British judges have long served among the foreign jurists appointed to Hong Kong’s highest court, an arrangement designed to maintain confidence in the city’s legal system that is seen as the bedrock of its broader social and commercial freedoms.

Britain handed its former colony back to Chinese rule in 1997 amid guarantees that its way of life would be protected under a “one country, two systems” model.

Truss said Britain was committed to continuing to monitor the situation in Hong Kong, including speaking to a broad range of politicians.

She expressed concern at the “growing pattern of the mainland Chinese and Hong Kong authorities misrepresenting such normal diplomatic contact as foreign collusion”.

The Hong Kong government said it “strongly opposed the unfounded allegations”, urging Britain to “stop interfering into the internal affairs of China through Hong Kong affairs.”

It also said it opposed the report’s criticism of the government’s overhaul of the electoral system. Hong Kong is due to vote for a new Legislative Council this weekend, with many opposition figures in jail or exile and only those classed as “patriots” allowed to run. – Rappler.com