UMBRELLA. Pro-democracy lawmaker Claudia Mo holds a yellow umbrella and her resignation letter at the Legislative Council in Hong Kong on November 12, 2020, after the pro-democracy bloc said they would resign en masse in protest at the ousting of four of their colleagues by the city's pro-Beijing authorities.

Facebook Twitter Copy URL
Copied
The move by Beijing 'has put the final nail in the coffin,' Claudia Mo, one of the lawmakers who resigned, says. 'It's rule by decree.'

China warned Thursday, November 12, that the mass resignations of pro-democracy lawmakers in Hong Kong were a “blatant challenge” to its authority over the city.

Fifteen legislators were set to quit the chamber in protest at the Beijing-sanctioned ousting of 4 colleagues, leaving the assembly a muted gathering of government loyalists.

The resignations come with the city’s beleaguered pro-democracy movement and avenues of dissent already under sustained attack since Beijing imposed a sweeping national security law this year.

Half of the group had made good on their pledge by Thursday afternoon, which sparked a furious response from Beijing’s Hong Kong and Macau Affairs Office.

“We have to tell these opposition lawmakers that if they want to use this to advocate a radical fight, and beg for foreign forces to interfere, and once again drag Hong Kong into chaos, that’s a wrong calculation.”

Inside the chamber, government loyalists discussed a transport bill, but without any of the rambunctious debate that has been the mark of Hong Kong’s semi-democracy in recent years.

“Hong Kongers – prepare for a long, long time where there is only one voice in society,” pro-democracy lawmaker Lam Cheuk-ting told reporters outside.

“If you are a dissident, get ready for even more pressure.” 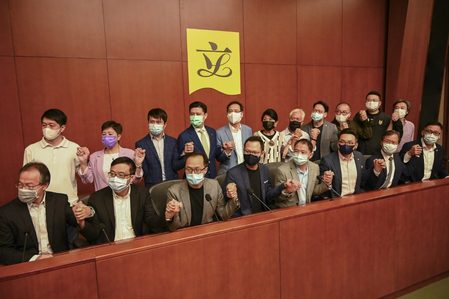 Hong Kong Chief Executive Carrie Lam, a Beijing appointee, on Wednesday was granted the power to turf out any legislator who she deems insufficiently patriotic, without recourse to the city’s courts.

She immediately made use of those powers, kicking out 4 lawmakers she said were a threat to national security, and sparking criticism both at home and abroad, with the United States threatening further sanctions on regime figures.

Britain summoned China’s envoy in London after accusing Beijing of breaking its international treaty obligations by ousting the 4 pro-democracy lawmakers.

The European Union urged their “immediate reinstatement,” and Canada said their ousting had the effect of “eroding human rights in Hong Kong.”

Chris Patten, the city’s last colonial governor, said the move demonstrated Beijing’s “total hostility to democratic accountability, and those who wish to stand up for it.”

“We urge the relevant people to strictly abide by the basic norms of international law and international relations, stop any form of interference into China’s internal affairs, of which Hong Kong affairs are a part,” he said.

The exodus of opposition lawmakers neuters one of the last forums for dissent in Hong Kong, as its once boisterous media reels under a crackdown unleashed by the national security law.

Restrictions on gatherings, partly because of the coronavirus, have also put the lid on the kind of huge rallies that roiled the city last year.

Millions took to the streets in largely peaceful protests over a lack of political accountability and what demonstrators saw as overbearing policing.

Violence and vandalism erupted at some demonstrations, and more than 10,000 people were arrested.

Ivan Choy, senior lecturer at the Chinese University of Hong Kong, said pro-Beijing figures would now take advantage of the absence of an opposition in the legislature “to pass many draconian laws.”

‘Final nail in the coffin’

Hong Kong’s leader is chosen by pro-Beijing committees, but half of the legislature’s 70 seats are directly elected, offering the city’s 7.5 million residents a rare chance to have their voices heard at the ballot box.

Scuffles and protests would routinely break out in the chamber, with the out-gunned pro-democracy minority often resorting to filibustering and other tactics to try to halt bills they opposed.

The expulsions and resignations will leave just two legislators outside the pro-Beijing camp, both of them unaligned with either bloc.

“It seems that the control of Hong Kong has now been exercised by the Chinese Communist Party authority in Beijing,” political analyst Willy Lam said, adding the basic rights enshrined when Britain handed the city back to China in 1997 were “seriously jeopardized.”

The move by Beijing “has put the final nail in the coffin,” Claudia Mo, one of the lawmakers who resigned, told AFP. “It’s rule by decree.”

“What’s the point of going to work every morning thinking, ‘Am I going to be kicked out?'” – Rappler.com