Facebook Twitter Copy URL
Copied
Former Malaysia premier Najib, who was convicted in July 2020, replaces his legal team just three weeks before his final appeal at the Federal Court begins. But the top court denies a request by his lawyers to withdraw.

KUALA LUMPUR, Malaysia – Former Malaysia premier Najib Razak said on Thursday, August 18, his right to a fair trial was at risk in his appeal against a 12-year jail sentence linked to the 1MDB scandal, after the country’s top court denied a request by his lawyers to withdraw.

Najib, 69, who was convicted in July 2020, replaced his legal team just three weeks before his final appeal at the Federal Court began on Monday.

An appellate court last year had upheld the verdict finding Najib guilty of criminal breach of trust, abuse of power, and money laundering for illegally receiving about $10 million from a former unit of state fund 1Malaysia Development Berhad (1MDB).

Prosecutors have said some $4.5 billion was stolen from 1MDB – co-founded by Najib as premier in 2009 – in a wide-ranging scandal that has implicated officials and financial institutions around the world. 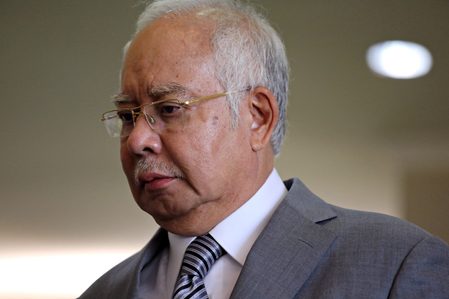 Najib, who faces several trials over the allegations, has pleaded not guilty to all charges.

The five-member Federal Court this week unanimously dismissed a request by Najib’s newly appointed lead counsel, Hisyam Teh Poh Teik, for a three- to four-month postponement so that his legal team can prepare for the case.

Hisyam told reporters another request to withdraw on Thursday was denied. The prosecution was ordered to present their arguments on Thursday without any rebuttals from the defense, according to media and comments by Najib after the hearing.

“For such a high-profile case, it is totally unprecedented that in a criminal case, the defense is left without any counsel,” Najib said, adding that his right to a fair trial was at stake.

“This is a very serious matter. And I hope that the court will take into account and make remedial measures at some point of time.”

Standing beside Najib, Hisyam said he could “see no meaningful” role that he could play in the proceedings given he was not prepared.

The judiciary and attorney-general’s chambers did not immediately respond to an emailed request for comment on Najib’s statement.

Najib has previously cited 94 reasons why he should be acquitted, including that lower courts had erred in some of their findings, documents submitted before the appeal had showed.

The hearing resumes on Friday.