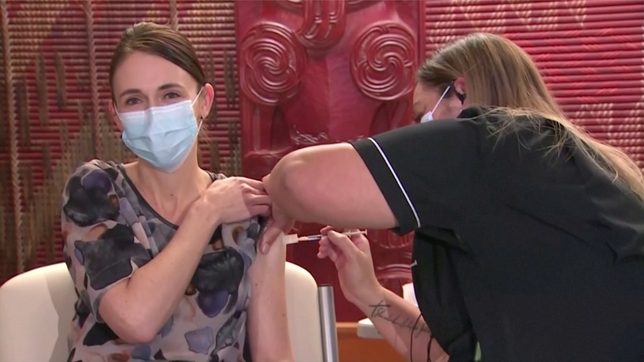 Facebook Twitter Copy URL
Copied
'This demonstrates that it's safe, that it's effective and that it's really important that everyone is vaccinated when they have their opportunity,' says Prime Minister Jacinda Ardern

Prime Minister Jacinda Ardern received her first shot of the Pfizer COVID-19 vaccine on Friday, June 18, as the country steps up efforts to inoculate its population.

The Pacific island nation shut its borders and used tough lockdown measures to become one of the few countries to have virtually eliminated COVID-19 in the community, but the government is facing criticism for a slow rollout of vaccines.

“I’m smiling under the mask,” Ardern said as she sat down to receive the shot at a vaccination center in Auckland, as the media watched on.

“For me, I never wanted to be amongst the first, for me we needed to get those frontline workers but I also need to be a role model and this demonstrates that it’s safe, that it’s effective and that it’s really important that everyone is vaccinated when they have their opportunity,” she said after receiving the vaccine shot.

About 1 million doses of the Pfizer vaccine have so far been administered in New Zealand, a nation of 5 million people. The country’s medical authorities are yet to approve the use of any other vaccine, including AstraZeneca.

The country was on track for everyone eligible to be vaccinated by the end of the year, Ardern said last week.

Pressure has been mounting on the government to speed up vaccinations and reopen its borders. Ardern has said having more people vaccinated gives the nation more options at the border.

Vaccinations would be allocated according to age with people over 60 offered one from July and those over 55 from August. Those over the age of 45 would get vaccine invitations from mid to late August while those over 35 from mid to late September, and everyone else would be eligible from October. – Rappler.com