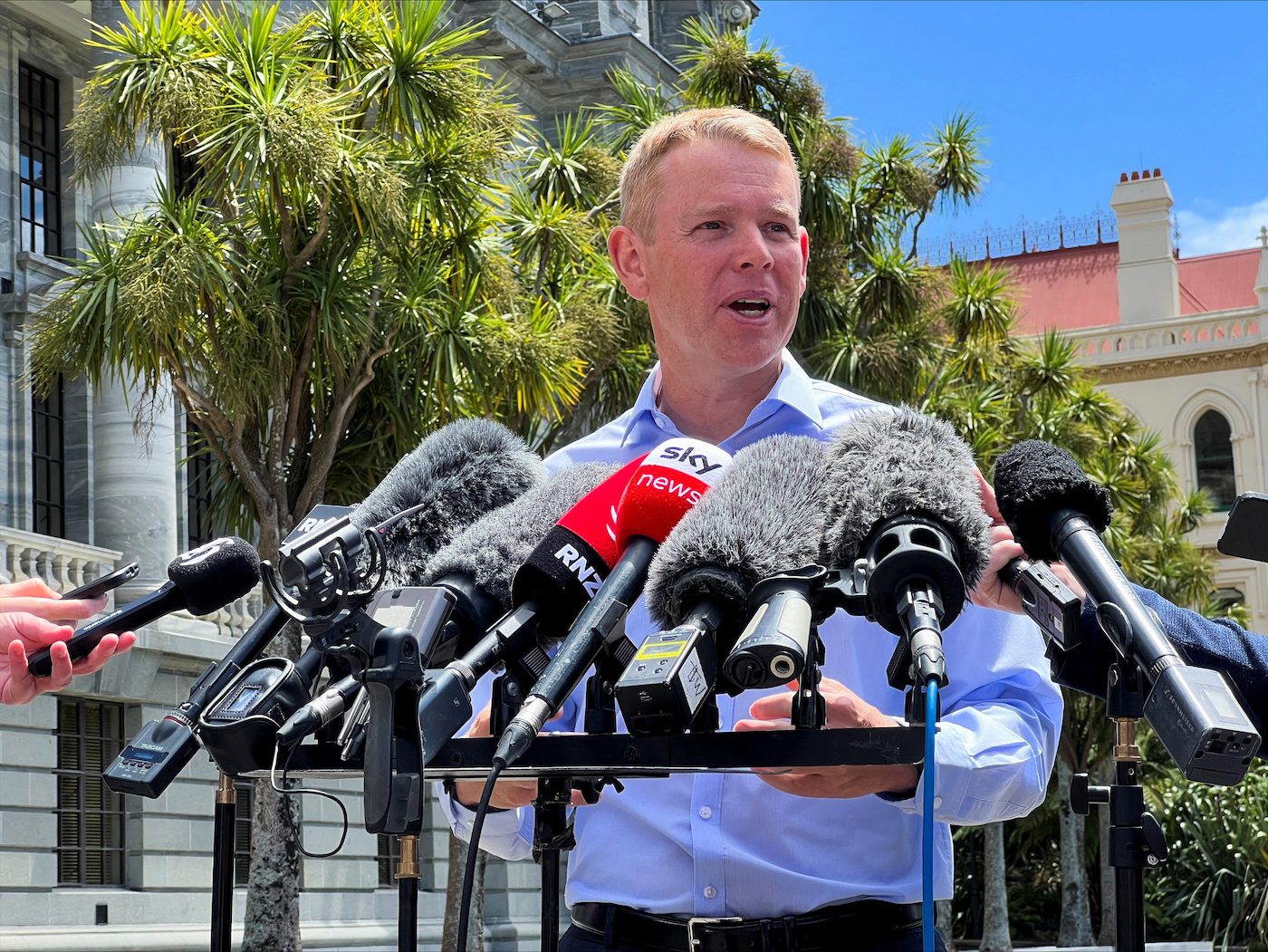 CHRIS HIPKINS. Chris Hipkins speaks to members of the media, after being confirmed as the only nomination to replace Jacinda Ardern as leader of the Labour Party, outside New Zealand's parliament in Wellington, New Zealand January 21 2023.

Facebook Twitter Copy URL
Copied
'Jacinda provided calm, stable, reassuring leadership, which I hope to continue to do. We are different people though, and I'm sure that people will see that,' says the former COVID minister who is a close ally of Jacinda Ardern

WELLINGTON, New Zealand – Chris Hipkins, set to become New Zealand’s prime minister, built a reputation for competence in tackling COVID-19, though he acknowledges some mistakes in handling the pandemic and faces a tough battle to retain power in an October general election.

Known as “Chippy,” the former COVID minister is a close ally of Jacinda Ardern, who shocked the nation on Thursday, January 19, by announcing she was resigning.

Hipkins, 44, expected to succeed Ardern as Labour leader on Sunday, January 22, after no other candidates emerged, faces a stern test upon taking power, with Labour trailing the opposition in opinion polls and the country expected to fall into recession next quarter before a general election on October 14.

Often brought in by Ardern when other cabinet colleagues were struggling with their portfolios, Hipkins pledged on Saturday, January 21, to continue her governing style while putting his own stamp on running the country.

“Jacinda provided calm, stable, reassuring leadership, which I hope to continue to do. We are different people though, and I’m sure that people will see that,” Hipkins told a news conference on Saturday after emerging as the only candidate to lead the ruling Labour Party.

First elected to parliament in 2008, Hipkins became a household name fronting the government’s response to the pandemic. He was appointed health minister in July 2020 before becoming the COVID response minister at the end of the year.

Under Ardern’s “go hard, go early” approach to COVID, the island nation of 5 million was among the first to close borders.

The policy was hailed around the world for keeping New Zealanders virus-free through the first half of 2021, but the public tired of the zero-tolerance strategy, which included a nationwide lockdown over a single infection.

Criticism over the strict lockdowns grew as officials struggled to control a Delta outbreak from August 2021. Hipkins later said quarantine measures should have been scaled back earlier.

“I’ve dealt with some challenging situations over the last five and a half years, the last couple of years particularly,” Hipkins said on Saturday. “And, you know, I’m a human being. I’ll make the odd mistake from time to time. I try and own the mistakes that I make.”

He would not be drawn on his policy plans.

A 1News-Kantar poll released in December had Labour’s support falling to 33% from 40% at the start of 2022. At that rate, Labour could not form a majority even with traditional coalition partner the Green Party at 9%. The opposition National Party has benefited from Labour’s decline.

Hipkins is known around parliament for his sense of humour – including an ability to laugh at himself.

Meaning to tell COVID-cramped New Zealanders once that they should socially distance when they go out to stretch their legs, he mistakenly said “spread your legs.” After the faux pas went viral, he was seen drinking from a mug with the notorious phrase on it.

Hipkins, who grew up in the Hutt Valley north of the capital Wellington, said his “parents came from relatively humble beginnings and worked really hard to provide a good life” for him and his brother.

“My commitment and politics is to make sure that we provide opportunities for all Kiwis who want to work hard, to be able to work hard and get ahead and provide a better life for themselves and for their families.”

Hipkins became minister for police in mid-2022 amid a crime wave. He is also minister for education and public service, as well as leader of the House.

Before joining parliament, he was senior adviser to two education ministers and served in the office of former Prime Minister Helen Clark.

An outdoor enthusiast and keen cyclist, Hipkins is known to commute to the capital Wellington by bicycle from his home in an adjoining city. – Rappler.com