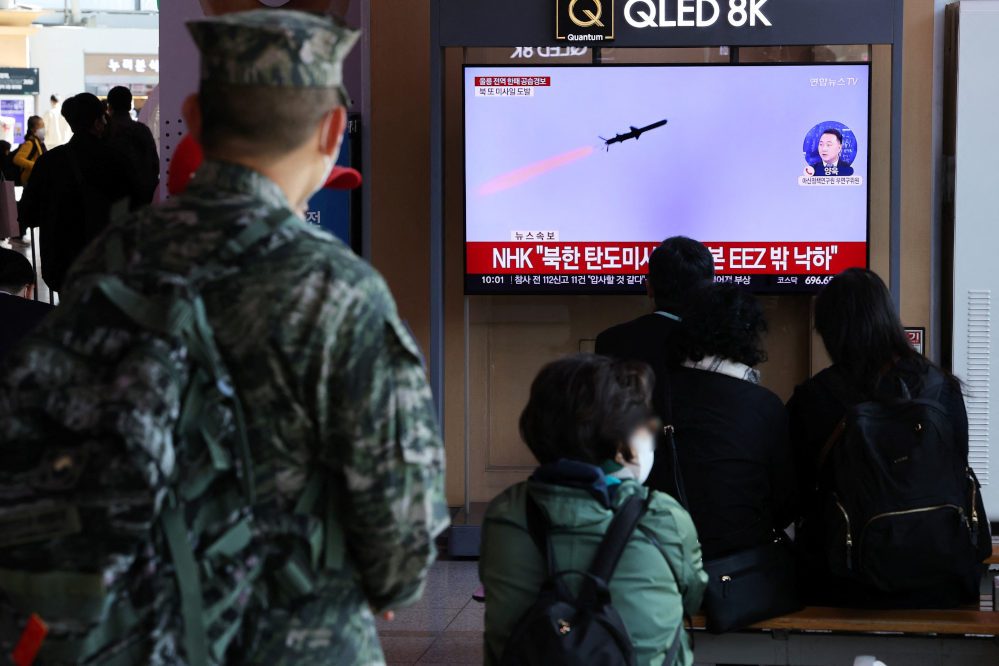 Facebook Twitter Copy URL
Copied
The missile is one of three short-range ballistic missiles fired from the North Korean coastal area of Wonsan into the sea, South Korea's Joint Chiefs of Staff say

The missile was one of three short-range ballistic missiles fired from the North Korean coastal area of Wonsan into the sea, South Korea’s Joint Chiefs of Staff (JCS) said.

The JCS said at least one of the missiles landed 26 kilometers south of the Northern Limit Line (NLL), a disputed inter-Korean maritime border. The missile landed 57 kilometers from the South Korean city of Sokcho, on the east coast, and 167 kilometers from Ulleung, where air raid warnings were issued.

“We heard the siren at around 8:55 am and all of us in the building went down to the evacuation place in the basement,” an Ulleung county official told Reuters. “We stayed there until we came upstairs at around 9:15 after hearing that the projectile fell into the high seas.”

A resident on the southern part of the island said they received no warnings.

The launches came just hours after Pyongyang demanded that the United States and South Korea stop large-scale military exercises, saying such “military rashness and provocation can be no longer tolerated.”

A spokesman for the South Korean military said authorities were analyzing the launches to see whether the missiles’ flight paths were intentional or whether one had gone off course.

It was the first time a North Korean ballistic missile had landed near South Korean waters, JCS said.

“Our military can never tolerate this kind of North Korea’s provocative act, and will strictly and firmly respond under close South Korea-U.S. cooperation,” JCS said in a news release.

“For North Korea to test missiles in S or SE direction into East Sea and towards South Korean territory is highly unusual and particularly provocative,” Joseph Dempsey, a defense researcher at the International Institute for Strategic Studies, wrote in a post online.

On Monday United States and South Korea began Vigilant Storm, one of their largest combined military air drills, with hundreds of warplanes from both sides staging mock attacks 24 hours a day.

North Korea has test-fired a record number of missiles this year, and has said that a recent flurry of launches were in response to the allied drills.

Japan defense minister Yasukazu Hamada said the government believed at least two ballistic missiles had been launched from North Korea, one flying east and another southeast.

“North Korea has been repeatedly launching missiles at an unprecedented rate, in new ways that we have not seen before,” Hamada said to reporters in Tokyo on Wednesday morning.

“These actions threaten the peace and stability of Japan, the wider region, as well as the broader international community, and are utterly unacceptable,” he added.

Japan has lodged a complaint and protested the actions via diplomatic channels in Beijing, he said. – Rappler.com