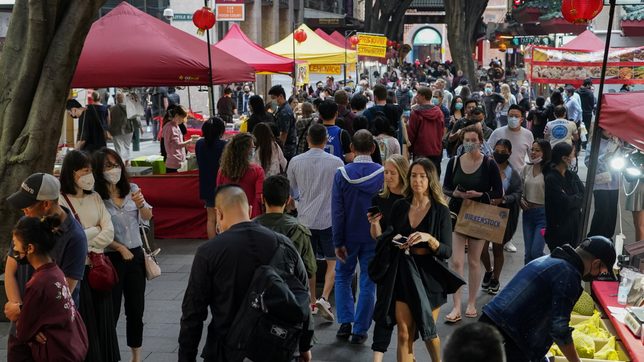 AUSTRALIA. In this file photo, people walk through a street market in the city centre, as coronavirus disease (COVID-19) vaccination rates continue to rise, in Sydney, Australia, November 19, 2021.

Several thousand people took to Australia’s streets on Saturday, November 20, protesting COVID-19 vaccination mandates, while smaller crowds gathered to support the measures that have elevated the country to be one of the most inoculated in the world.

Nearly 85% of Australians aged 16 and above have been fully vaccinated against the coronavirus as of November 19. While nationwide vaccinations are voluntary, states and territories have mandated vaccinations for many occupations and barred the unvaccinated from activities such as dining out and concerts.

Protesters gathered also in Sydney, Brisbane and other cities, with no immediate reports of unruly behavior. A banner in Sydney read, “My life is not a gift from the government, it is a gift from God,” according to The Age newspaper.

The anti-vaccination rallies have continued for weeks in Australia, becoming occasionally violent and attracting loose groups of regular citizens, as well as far-right and conspiracy theory supporters.

The anti-vaccination movement, however, remains small, with polls showing nationwide opposition in the single digits.

A counter-rally of several hundred took place in Melbourne, organized by the Campaign Against Racism & Fascism group under the slogan of “Don’t scab, get the jab.”

The chief of the Australia Open tournament, the year’s first Grand Slam tennis tournament and one of Australia’s biggest sporting events, said on Saturday, that all players will have to be vaccinated to compete in January in Melbourne.

On Saturday, there were 1,166 new COVID-19 infections in the state of Victoria, of which Melbourne is the capital. Five more people died. The most populous state of New South Wales, where nearly 92% of people are fully vaccinated, reported 182 new cases.

Despite the Delta outbreaks that led to months of lockdown in Sydney and Melbourne, Australia has had only about 760 confirmed cases and 7.5 deaths per 100,000 people, according to data from the World Health Organization, far lower than many other developed nations. The United Kingdom, for example, has had more than 14,000 confirmed cases and 211 deaths per 100,000 people.

Neighboring New Zealand, which is also learning to live with the coronavirus through high vaccination rates, reported 172 new cases. As of Friday, 83% of the Pacific nation’s population have been fully vaccinated. – Rappler.com