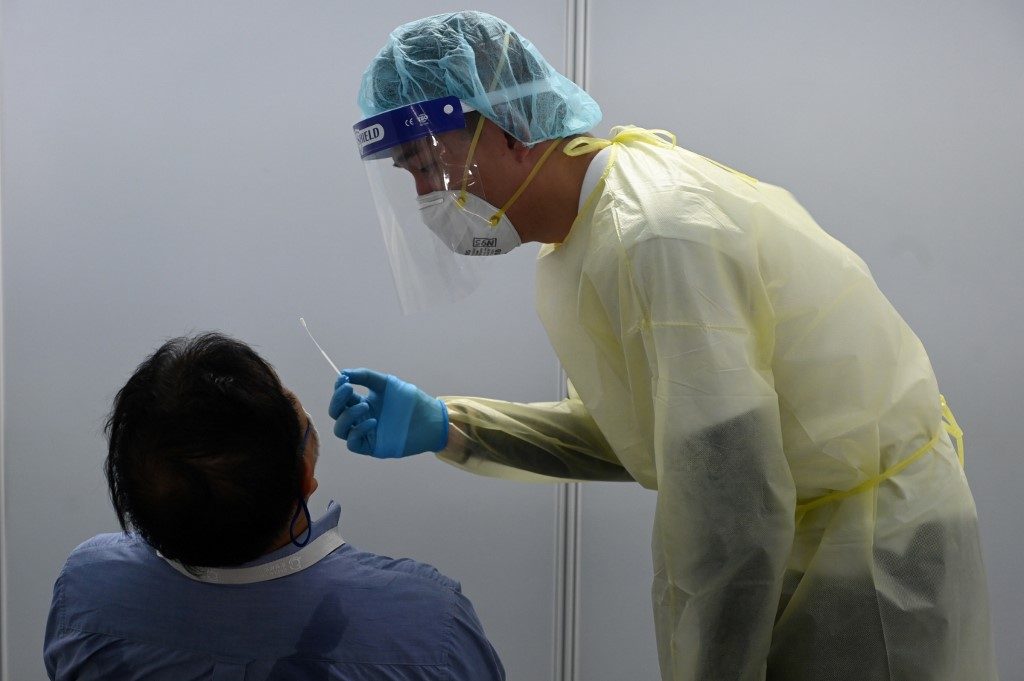 COVID-19 IN SINGAPORE. A health personnel conducts antigen rapid test for Covid-19 coronavirus to a passenger during embarkation procedures on World Dream cruise ship for "cruises to nowhere" at Marina Bay Cruise Centre in Singapore on November 6, 2020, in a bid to revive its pandemic-hit tourism industry.

Facebook Twitter Copy URL
Copied
Prime Minister Lee Hsien Loong says 'if all goes according to plan,' Singapore will have enough vaccines for its 5.7 million population 'by the third quarter of 2021'

Priority will be given to those at most risk, such as health care workers, the elderly, and vulnerable.

Vaccination would be voluntary, Lee said, but he was “strongly” encouraging people to get the shot.

“Because when you get yourself vaccinated, you are not just protecting yourself. You are also doing your part to protect others, especially your loved ones,” he said.

Lee also announced a further easing of virus curbs from December 28 as Singapore’s outbreak slows markedly, with weeks of barely any local transmissions.

The maximum number of people who can gather outside their homes and the number of visitors a household can host will be raised from 5 to 8, he said.

The number of people allowed in shopping malls, places of worship, and attractions such as museums will also be raised.

Lee, however, warned the situation was volatile and urged residents to continue to keep their guard up.

“This is absolutely not the time to relax and let our guard down, or to hold a big party imagining the problem has disappeared,” he said.

The city-state joins a handful of other countries around the world, including Britain and the United States, which have approved the jab.

The first country to approve the use of the vaccine was Britain, which began its biggest vaccination program on December 2.

In November, Pfizer and BioNTech announced its vaccine protected 95% of people against COVID-19.

As of Monday, Singapore has a total of 58,325 coronavirus cases, with 88 active cases, 29 deaths, and 58,208 recoveries, according to data from Worldometer. – with reports from Agence France-Presse/Rappler.com