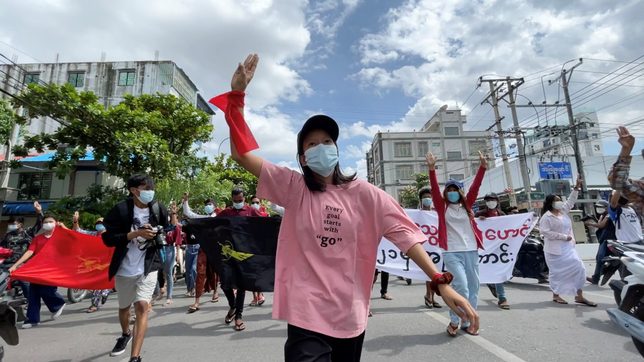 NOT EFFECTIVE? An anti-coup protester shows the three-finger salute during a march on the anniversary of a 1988 uprising, in Mandalay, Myanmar, on August 8, 2021, in this still image obtained by Reuters from a social media video.

The progress by the Association of Southeast Asian Nations (ASEAN) in Myanmar has not been as effective as hoped, Singapore’s foreign minister said in an interview.

The United Nations and many countries have urged ASEAN, whose 10 members include Myanmar, to restore stability through diplomacy.

“(ASEAN is) not as effective or as quick as we would have hoped for. But this is a difficult situation,” Vivian Balakrishnan told Reuters.

In April, ASEAN announced a five-point consensus aimed at resolving the crisis. As part of those efforts, the bloc appointed Brunei’s second minister for foreign affairs as special envoy to Myanmar in early August.

Balakrishnan said he hoped there would be progress to report on the envoy’s visit before the ASEAN leaders’ summit in November. But he cautioned that the military had to grant the envoy access to all stakeholders for the visit to be meaningful.

“The key litmus test now will be how they engage with our special envoy,” Balakrishnan said.

The death toll as a result of Myanmar’s February 1 coup topped 1,000 this week, according to the Assistance Association of Political Prisoners (AAPP) activist group, which has been recording killings by security forces.

Myanmar’s economy has collapsed and a humanitarian crisis worsened in the past month as coronavirus infections surged, overwhelming the health system.

“We have maintained lines of communication,” Balakrishnan said, when asked whether ASEAN or Singapore had engaged with the shadow National Unity Government. “We’re not trying to make things difficult. And we’re not playing sides. But (military authorities) know we will engage everyone.”

Singapore is small but wields strong economic and political influence in Southeast Asia. Some rights groups say Singapore has leverage in Myanmar thanks to its close ties with country as one of its biggest investors.

The city-state had a cumulative $24.1 billion of investments approved there as of 2020, according to official Myanmar data since 1988. That made it the biggest source of foreign capital there, ahead of China.

However, Balakrishnan said Singapore’s “so-called leverage was overestimated,” because the total also included multinationals that have invested in Myanmar.

He said economic sanctions would ordinary people but have a limited effect on the military authorities, who can better withstand isolation.

There has been no discussion within ASEAN about expelling or suspending Myanmar, the minister said, adding that the bloc wanted to be constructive but did not want to interfere in domestic politics.

He was speaking to Reuters two days ahead of Vice President Kamala Harris’s trip to Vietnam and Singapore. The trip is set to show that the Biden administration is committed to a “free and open Indo-Pacific” and that the United States is in the region “to stay,” according to a senior administration official.