South Korea to vaccinate 12 to 17 year-olds, give boosters to elderly 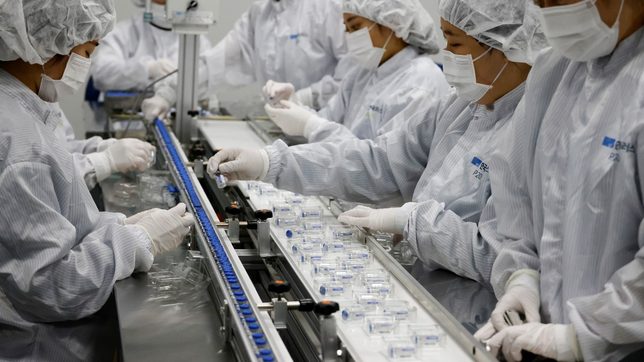 Facebook Twitter Copy URL
Copied
South Korea aims to boost vaccination and fully immunize 90% of those aged 60 and older, and 80% of 18 to 59 years-old by the end of October

South Korea said on Monday, September 27, it would begin inoculations next month for children aged 12 to 17 and offer COVID-19 vaccine booster shots to those 75 years and above as the country starts to transition to normalcy by the end of October.

South Korea, which has been battling a fourth wave of infections since early July, scrambled over the weekend to contain a surge in cases. Infections topped 3,000 for the first time fueled by last week’s public holidays.

The vaccination advisory committee of the Korea Disease Control and Prevention Agency (KDCA) has ruled that the benefits outweigh the risks in vaccinating children. However, parents who have healthy children, such as those who do not have underlying conditions, are advised to weigh the relative benefits in making their decision, KDCA Director Jeong Eun-kyeong told a news conference on Monday.

While approving vaccinations for 12 to 17 year-olds, who will be given Pfizer shots, the panel and the government had not mandated that all children should take the shot.

The United States had by August vaccinated 50% of 12-17 year-olds and some European and Asian countries, including Germany and the Philippines have also been recommending vaccines for the age group.

Jeong said the initial booster doses from Pfizer/BioNTech and Moderna will go to those with weakened immune systems or deemed to be at high risk – the elderly, nursing home patients and staff.

The country aims to boost vaccination and fully immunize 90% of those aged 60 and older, and 80% of 18 to 59 years-old by the end of October.

Over 91% of the people aged 60 and above have so far received at least one dose, and vaccinations are under way for those 18 and above, 86.3% of whom have already had the first shot.

Despite the high daily case numbers, the country has kept its mortality rate and severe COVID-19 cases relatively low and steady at 0.81% and 319, respectively, as of Sunday.

Some 74.2% of its 52 million population have had at least one dose of a vaccine through Sunday, and more than 45% are fully vaccinated.  – Rappler.com