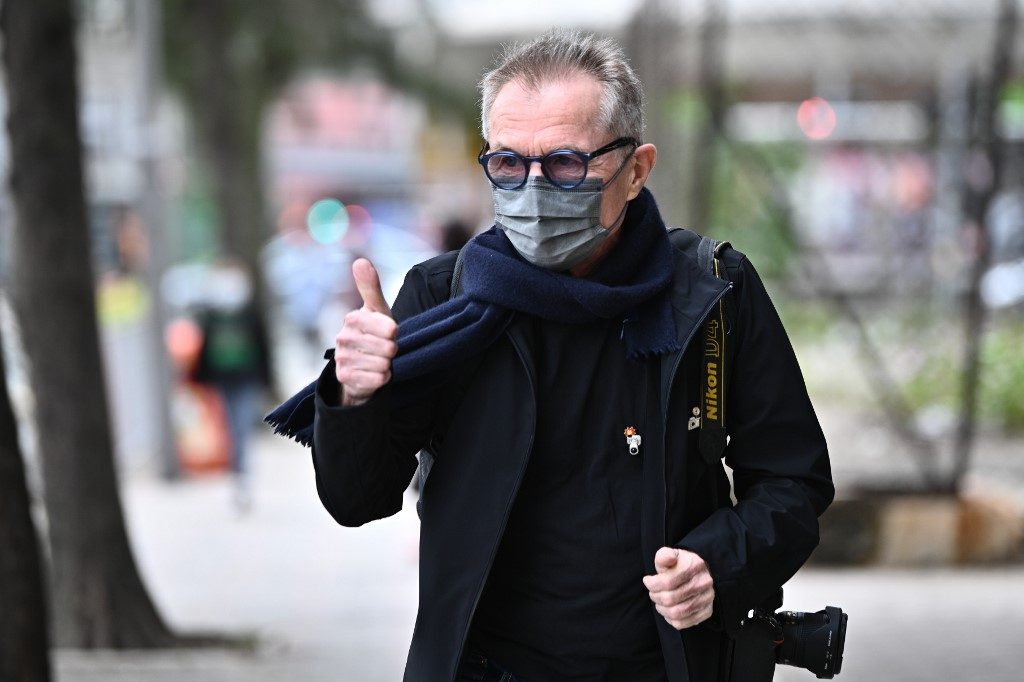 Swiss photographer Marc Progin, 75, gestures before entering the Eastern Magistrates' Court in Hong Kong on November 13, 2020, to hear the verdict in his trial on the charge of aiding and abetting disorder in a public place, with prosecutors accusing him of enabling an assault on a Chinese mainlander during last year's democracy protests. (Photo by Anthony WALLACE / AFP) / The erroneous mention[s] appearing in the metadata of this photo by Anthony WALLACE has been modified in AFP systems in the following manner: [November 13, 2020] instead of [November 12, 2020]. Please immediately remove the erroneous mention[s] from all your online services and delete it (them) from your servers. If you have been authorized by AFP to distribute it (them) to third parties, please ensure that the same actions are carried out by them. Failure to promptly comply with these instructions will entail liability on your part for any continued or post notification usage. Therefore we thank you very much for all your attention and prompt action. We are sorry for the inconvenience this notification may cause and remain at your disposal for any further information you may require.

A Swiss photographer who closed a door on a Chinese mainlander moments before he was assaulted during last year’s Hong Kong protests was on Friday, November 13, found not guilty of aiding the attack.

Marc Progin was cleared of “aiding and abetting public disorder” over the incident in which JP Morgan employee Lin Nan was punched, Magistrate Stephanie Tsui said at the city’s Eastern Magistrates’ courts.

Prosecutors said Progin, 75, deliberately shut a door leading to JP Morgan’s regional headquarters as an argument broke out between Lin and a crowd of pro-democracy supporters last October.

They argued his actions effectively enabled the assault on Lin and that Progin therefore took part in the unfolding public disorder.

Defense lawyers said Progin was simply doing his job and that he closed the door to get a better angle to capture the argument through his lens.

The magistrate said the court could not rule out the possibility that his intention was “to take good pictures”.

He had faced up to a year in jail if found guilty.

‘We are all Chinese’

Lin testified that he felt frightened as the crowd shouted at him and that he did not believe Progin was there to take photographs.

But the defense argued that Lin was not frightened and his decision to stop, turn around and say: “We are all Chinese” had provoked the protestors.

Photographs taken by Progin during the incident were submitted as evidence that he was a working professional and not a member of the protest crowd.

Progin moved to Hong Kong in 1976 and forged a career as a watchmaker. After retirement he became an adventurer and photographer with multiple exhibitions.

When protests swept through Hong Kong last year he often picked up his camera to document the crisis.

Lin moved to Hong Kong in 2008 and was working as a client consultant with JP Morgan at the time of the incident. His attacker has yet to be arrested.

Hong Kong was rocked by 7 months of pro-democracy protests last year, upending the business hub’s reputation for safety and stability.

Millions of residents peacefully hit the streets as anger towards Beijing’s rule exploded, with clashes between more militant protesters and police becoming a near daily occurrence.

Street fights also routinely broke out between people on opposing sides of the political divide.

Chinese authorities imposed a draconian national security law on Hong Kong in late June, describing it as a “sword” that would now hang over the heads of its critics.

In the latest blow to the city’s beleaguered democracy movement, 15 lawmakers this week said they would resign from the city’s legislature in protest at a Beijing-sanctioned ousting of four colleagues. –Rappler.com