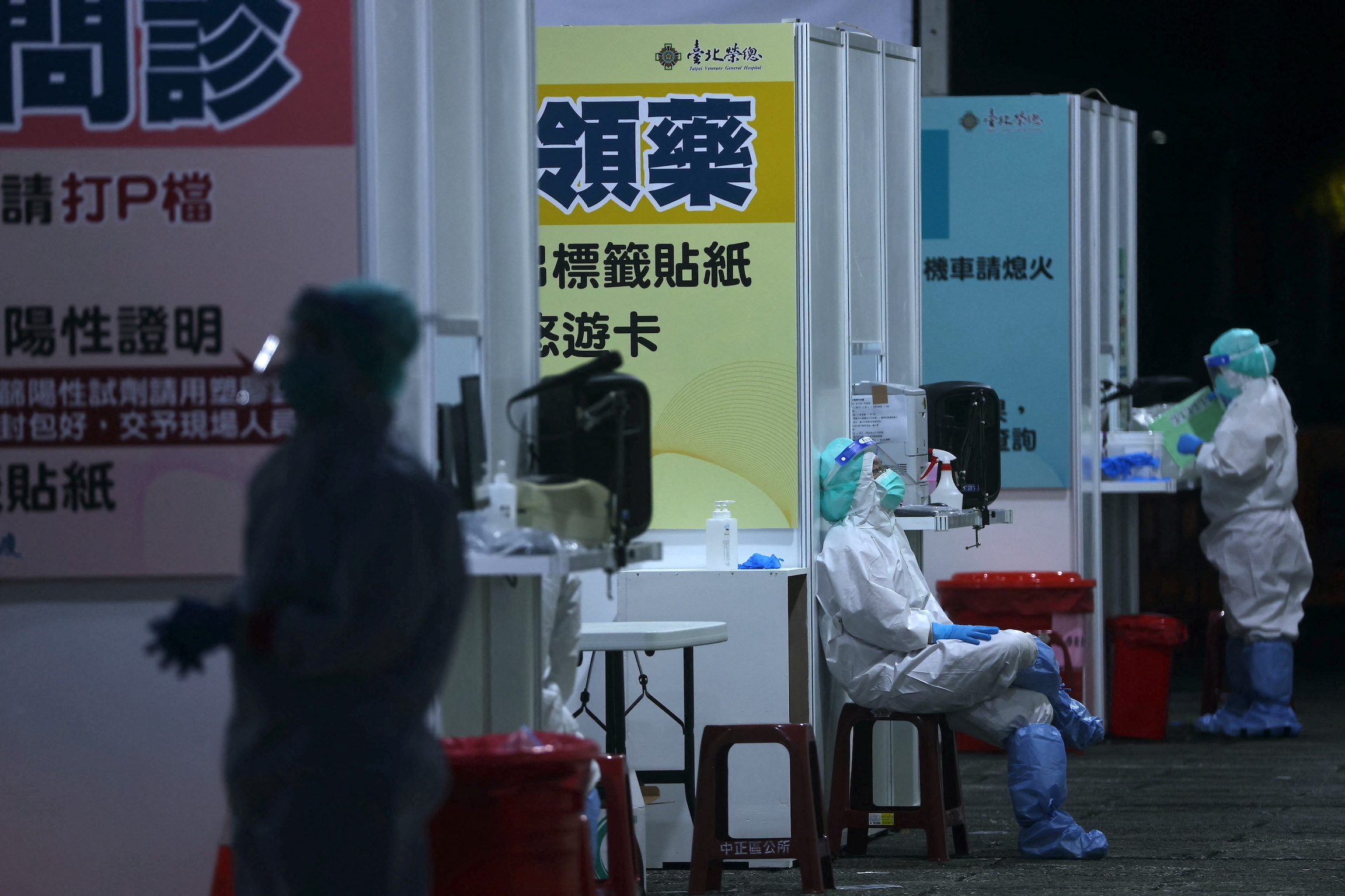 Facebook Twitter Copy URL
Copied
Most infections in Taiwan are of the less severe Omicron variant, with more than 99.7% of cases exhibiting mild or no symptoms

TAIPEI, Taiwan – Billed a COVID-19 success story as its economy boomed through the pandemic, Taiwan is now battling a record wave of infections as it eases restrictions that had kept outbreaks at bay to start life with the virus.

For the whole of 2021, Taiwan reported less than 15,000 locally transmitted cases. Now, it’s registering around 80,000 cases a day – a startling reversal after the effectiveness of its long-standing zero-COVID policy won it international praise.

“We could no longer achieve the goal of zero COVID because it was too contagious,” former vice president Chen Chien-jen, an epidemiologist, said in a video released by the ruling Democratic Progressive Party on Sunday. Most cases in Taiwan are of the less severe Omicron variant, with more than 99.7% of cases exhibiting mild or no symptoms, he said.

“This is a crisis but also an opportunity, allowing us to walk out of the shadow of COVID-19 quickly,” Chen said.

Despite a peak of infection forecast for this week, the government is determined to end a policy that included largely closing its borders. It has relaxed restrictions, such as shortening mandatory quarantines, in what it calls the “new Taiwan model” – gradually living with the virus and avoiding shutting down the economy. Taiwan’s approach stands in contrast with China, where strict measures to control outbreaks have led to the prolonged lockdown of Shanghai – a city of 25 million people – and movement curbs in numerous cities including Beijing.

Former vice president Chen said Taiwan would be ready to reopen to tourists when 75-80% of the population had received a third vaccination shot. The rate currently stands at 64%.

Health Minister Chen Shih-chung said on Monday that Taiwan aims to keep the death rate below 0.1%. The current rate is around 0.06% and rising slowly.

Opposition parties said the government was ill-prepared, citing an initial shortage of home rapid test kits when cases started spiking last month, and criticized it for moving too slowly to secure vaccines for children under 12.

The surge in cases is now sparking new precautions. Starting this week, classes in Taipei schools were moved online while subway ridership has fallen to about half average levels.

“Taiwan didn’t really have a choice. Naturally, we need to move on to coexist with the virus,” said Shih Hsin-ru, who leads the Research Center for Emerging Viral Infections at Taiwan’s Chang Gung University.

She said the government was not well prepared for the shift away from the zero COVID approach, pointing to the initial shortage of resources, from vaccines to antivirals. But things are looking better after what she described as a “scramble” by the government.

“We are slowly getting back on track,” she said. “We are likely to see less impact compared to neighboring countries.” – Rappler.com