Thai police face off again with protesters near PM’s residence 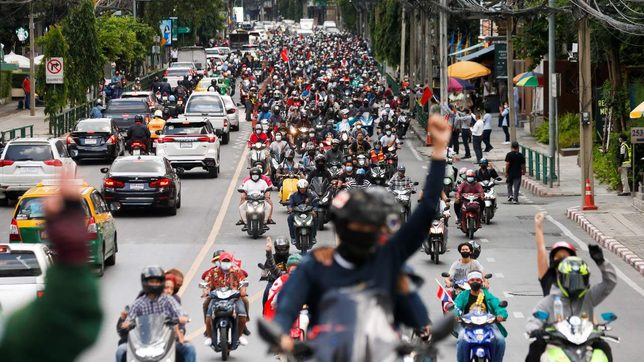 PROTEST. Demonstrators take part in a protest against the government's handling of the COVID-19 pandemic, in Bangkok, Thailand, on August 10, 2021.

Thai police clashed with protesters for a second successive day on Wednesday, August 11, after hundreds sought to rally near the residence of Prime Minister Prayuth Chan-ocha to demand his resignation for mismanaging the country’s coronavirus crisis.

Hundreds of protesters threw paint at a line of riot police who confronted them as they tried to march on Prayuth’s home and police responded with tear gas and rubber bullets to disperse them.

Barbed wire fences and shipping containers were used to block the road.

Police used tear gas, water cannon and rubber bullets to break up a similar protest on Tuesday, when thousands of demonstrators drove in a convoy of cars and motorcycles through Bangkok.

Police defended their use of force as a necessary public safety measure and said the 48 people arrested face charges ranging from arson and assault to violating coronavirus rules that ban public gathering.

Prayuth has come under fire for a chaotic vaccination campaign and failure to quell Thailand’s worst worst COVID-19 wave yet, which has accounted for the bulk of the country’s more than 788,000 cases and 6,700 deaths.

The youth-led protest movement sought to topple former junta leader Prayuth during big rallies late last year, accusing him of rigging Thailand’s political system to stay in charge, which he denies. The government at that time had successfully contained its COVID-19 outbreaks.

Though some core leaders remain in detention, the movement has seen a resurgence since the coronavirus situation deteriorated.

Police said nine officers were injured at the Tuesday protest, one by gunshot to the leg and the others hurt by firecrackers, rocks and shrapnel from homemade bombs.

“Police decided to use tear gas, water cannon and rubber bullet because we considered that if we don’t, there will be more damage,” Bangkok police chief Pakapong Pongpetra told a news conference. – Rappler.com