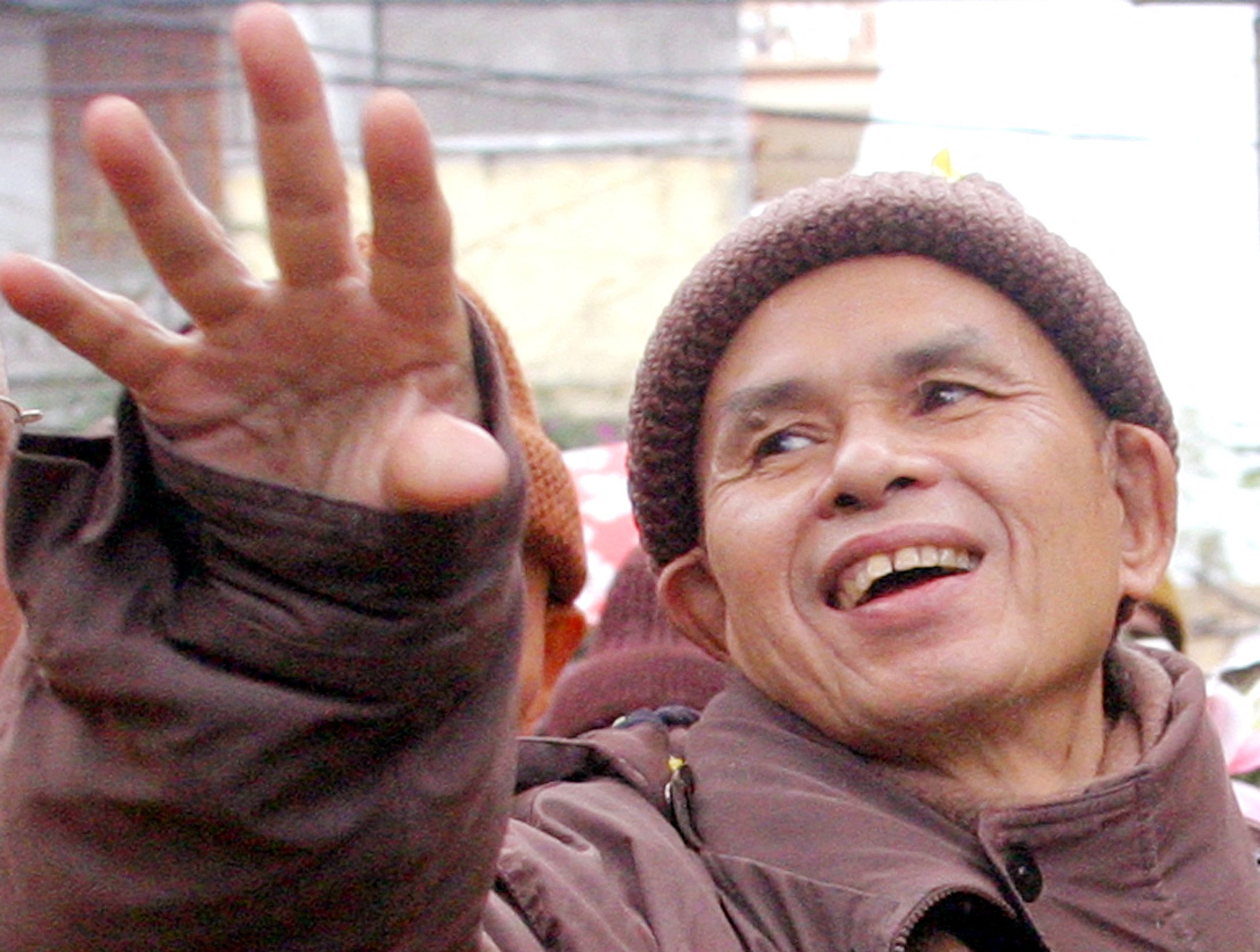 ICON. French-Vietnamese Buddhist monk Thich Nhat Hanh waves to the crowd at the Bo De pagoda in Hanoi in this picture taken January 12, 2005.

Facebook Twitter Copy URL
Copied
As a pioneer of Buddhism in the West, Thich Nhat Hanh spoke regularly on the practice of mindfulness – identifying and distancing oneself from certain thoughts without judgement

Thich Nhat Hanh, the Zen Buddhist monk, poet, and peace activist who in the 1960s came to prominence as an opponent of the Vietnam War, died on Saturday, January 22, aged 95 surrounded by his followers in the temple where his spiritual journey began.

“The International Plum Village Community of Engaged Buddhism announces that our beloved teacher Thich Nhat Hanh passed away peacefully at Tu Hieu Temple in Hue, Vietnam, at 00:00hrs on 22nd January, 2022, at the age of 95,” said his official Twitter account.

In a majestic body of works and public appearances spanning decades, Thich Nhat Hanh spoke in gentle yet powerful tones of the need to “walk as if you are kissing the earth with your feet.”

He suffered a stroke in 2014 which left him unable to speak and returned to Vietnam to live out his final days in the central city of Hue, the ancient capital and his place of birth, after spending much of his adult life in exile.

As a pioneer of Buddhism in the West, he formed the “Plum Village” monastery in France and spoke regularly on the practice of mindfulness – identifying and distancing oneself from certain thoughts without judgement – to the corporate world and his international followers.

“The art of happiness and the art of suffering always go together.”

Thich Nhat Hanh, who spoke seven languages, lectured at Princeton and Columbia universities in the United States in the early 1960s. He returned to Vietnam in 1963 to join a growing Buddhist opposition to the US-Vietnam War, demonstrated by self-immolation protests by several monks.

“I saw communists and anti-communists killing and destroying each other because each side believed they had a monopoly on the truth,” he wrote in 1975.

“My voice was drowned out by the bombs, mortars and shouting.”

Towards the height of the Vietnam War in the 1960s, he met civil rights leader Martin Luther King, whom he persuaded to speak out against the conflict.

King called Thich Nhat Hanh “an apostle of peace and non-violence” and nominated him for the Nobel Peace Prize.

“I do not personally know of anyone more worthy of the Nobel Peace Prize than this gentle Buddhist monk from Vietnam,” King wrote in his nomination letter.

While in the United States to meet King a year earlier, the South Vietnamese government banned Thich Nhat Hanh from returning home.

Fellow monk Haenim Sunim, who once acted as Thich Nhat Hanh’s translator during a trip to South Korea, said the Zen master was calm, attentive, and loving.

“He was like a large pine tree, allowing many people to rest under his branches with his wonderful teaching of mindfulness and compassion,” Haemin Sunim told Reuters.

“He was one of the most amazing people I have ever met”.

Thich Nhat Hanh’s works and promotion of the idea of mindfulness and meditation have enjoyed a renewed popularity as the world reels from the effects of a coronavirus pandemic that has killed over a million people and upended daily life.

“Hope is important, because it can make the present moment less difficult to bear,” Thich Nhat Hanh wrote. “If we believe that tomorrow will be better, we can bear a hardship today.

“If you can refrain from hoping, you can bring yourself entirely into the present moment and discover the joy that is already here.” – Rappler.com